The third in a series of posts on the summer riots of 1981.

The fighting in Toxteth died down on Monday, but the following day the torch (more or less literally) was passed from Liverpool to Manchester.

On that Tuesday night (7th July), or technically in the early hours of the next morning, 'after Moss Side's Nile Club closed a crowd of mainly black men spilled out on the street. A brick was thrown at a shop window and the trouble spread as other shops were attacked with petrol bombs'. Things calmed down after an hour or so, but just until the next day.

On the Wednesday, ‘Manchester and Salford were struck by severe and widespread riots... More than 1,000 youths stormed Moss Side police station, causing severe damage before being driven back… vehicles [were] overtuned, fires started and shops destroyed and looted…. Many petrol bombs were thrown… Three policemen, including an inspector injured by a bolt from a crossbow, were casualties’ (The Times, 9 July 1981). 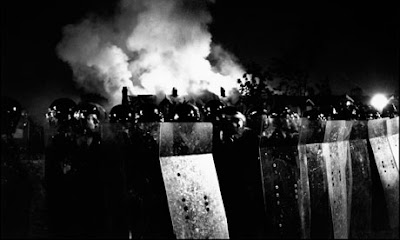 The next night (Thursday), the police mounted a massive operation to clear the streets. That night, Manchester police were the first in Britain to deploy crash helmet-style riot headwear and to adapt the Northern Ireland tactic of using vehicles to break up crowds '54 vans swept through Moss Side charging at crowds with their back doors hanging open' (Uprising!: the police, the people and the riots in Britain's cities - Martin Kettle and Lucy Hodges, Pan Books, 1982)

The official Hytner report into the riot reported 'that many of the policeman in Moss Side in vehicles... were actively spoiling for trouble with young blacks. There was evidence of police vans toruing the area with officers leaning out of the back shouting racial insults at black youths and taunting them to come and fight'. Many people were beaten up by police, some of whom (according to the Guardian) were beating their truncheons on their vans and chanting 'Nigger, nigger, nigger - oi, oi, oi' (quoted in Kettle and Hodges).