The first of a series on the 1981 July uprisings/riots in Britain. Night number one was in Southall:
On Friday 3 July 1981, several 'Oi' punk bands were set to play a gig in Southall, an area of west London with a large South Asian population. The line up at the Hambrough Tavern included the 4-Skins, The Last Resort and The Business. Oi was not a fascist movement as such, and not all its bands and adherents were racist. It was quite distinct from the White Power music scene around bands like Skrewdriver (see: Misunderstood or hateful? Oi!'s rise and fall by Alexis Petridis, Guardian, March 18 2010). But it is true that gigs by such bands did attract skinheads with neo-nazi sympathies, and their presence in an area like Southall was asking for trouble.
This was after all where Blair Peach had been killed by police in anti-National Front demonstration in 1979, and where in 1976 Gurdip Singh Chagger, a teenager, had been murdered by racists - prompting the formation of the Southall Youth Movement. In July '81, reports of racist incidents involving people heading to the gig in the Hambrough prompted Asian youth to take to the streets. Skinheads were said to have broken shop windows and abused an Asian shopkeeper, among other things. The police formed a cordon around the pub, and deployed riot shields. Clashes intensified as the police attempted to disperse the crowd. Petrol bombs were thrown and the pub was set on fire. Cars and police vehicles were overturned, and a police coach was burnt out. Walls were demolished to provide bricks for ammunition. 61 policemen were injured and at least as many civilians; there were 21 arrests. 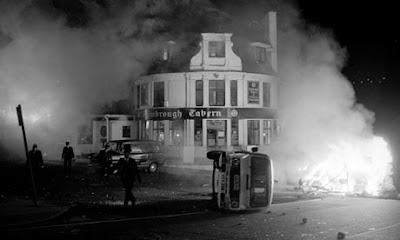 Here's a contemporary report from Socialist Worker (11 July 1981), written by Balwinder Singh Rada - a long term Southall activist:
'The invaders of  Southall got more than they bargained for. They began the evening by terrorising some local Asians and ended by fleeing with their tails between their legs, protected by lines of police. The pub in which they had gathered was in flames.
Nazis started arriving in Southall at about 7 pm: 300 of them in four coaches and cars. Sine unfurled a banner in the Southall Broadway and started distributing leaflets advertising a “white nationalist crusade“ demonstration. Then they smashed the shop window and attacked Mr Nirmal Kalhan who was at the till. That led to a rampage through the Broadway smashing Asian shop windows and onto the Hambrough Tavern about 250 yards away.
At this time few Asians were about. Some newspapers have claimed that the Asians “lay in weight“ for the skinheads. Harsev Singh Bains, secretary of the Indian Youth association, said “if we knew they were coming we would not have let them anywhere near Southall“.
But the word spread quickly and the youth started to gather near the pub. By this time the police had also arrived. For an hour and a half people argued with the police that they should arrest the fascists who attacked the people and smashed the shop windows and put the rest of them on coaches and send them away. But the police kept telling the Southall people to go away.
Mohan Singh who saw the shop being attacked said “I said to chief inspector that I can recognise the troublemakers, why don’t you go into the pub with me and arrest them? But he told me to “buy a beer, go home and watch it on the TV“.
When enough reinforcements plus the special patrol group arrived, the police decided to move the Southall people by attacking them with riot shields and truncheons. The fascists poured  out of the pub and from behind the police lines started throwing stones and petrol bombs at the Asians.
The people of Southall fought  back. They pushed the police and the fascists down the road. The whole community joined in the defence. Old men and women were coming out of their homes with stones and bottles in their hands and handing them over to the younger people. The youth, Asians, West Indians and some white, fought bravely against the police and the fascists and the pub was set on fire. Since then there has been a feeling of victory throughout the community.
On Saturday groups of people gathered in the Broadway chatting about how the fascists and the police have been taught a lesson. It was a lesson as well for the racist pubs in the area.
Many people believe that the police knew before about the fascists invasion. That they wanted a riot to help their case in the Scarman enquiry about the Brixton right. On Friday, as usual the police arrested about 25 Asians and only about five fascists. The Anti-Nazi League together with many other organisations are launching a defence campaign for  the arrested'
An item on the same page argues that not all skinheads are racists: ' Skinheads are rapidly becoming identified in the public eye as racist and Nazis. But this is not the case. Plenty of skinheads are not racists. Four weeks ago 500 black and white skinheads  marched together in Sheffield with the slogan ‘job not jails’ demanding an end to police harassment. And last Saturday there were hundreds of skinheads at the Leeds Anti-Nazi League carnival not only enjoying the music but also acting as stewards to protect the carnival from threatened  Nazi attacks'. The report contrasted newspaper reports of the Southall events with the muted press response to the deaths of four members of the Khan family in a fire in Walthamstow in the same week, believed to have been caused by a racist arson attack. 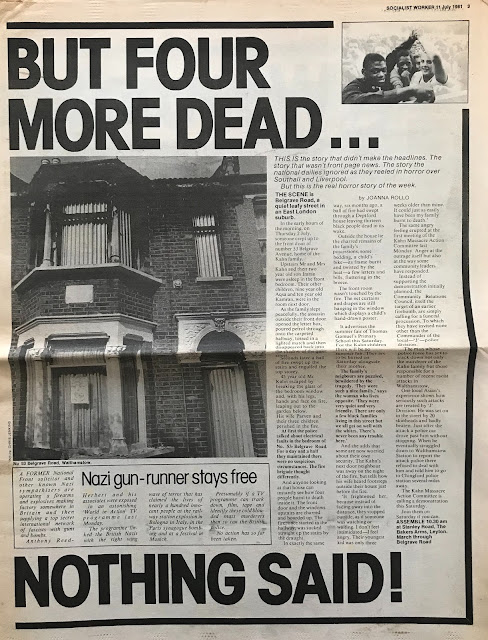 There's some footage of the riot on youtube in the course of an old documentary about Oi
Some similarities between the Southall events and the riots in Luton a week later, also sparked off by the presence of racist skinheads - see The Luton Riots of 1981 - Brixton comes to Bedfordshire
[post updated July 2021]
Posted by Transpontine at 7/03/2011 10:10:00 am

I think the people of Southall had had enough of the ongoing incidents at that time, and the gig was seen as a provocation to bring racists to the area. Through the late seventies, the NF/BM even had a song about 'bashing' people of colour that even named Southall as where they were going. Skinheads at my school used to sing it. Bringing a load of them to that place was just asking for trouble.

Thank you for some context from a local. Must have been difficult time