A report on police  raids on two free parties in Hackney in 1996: 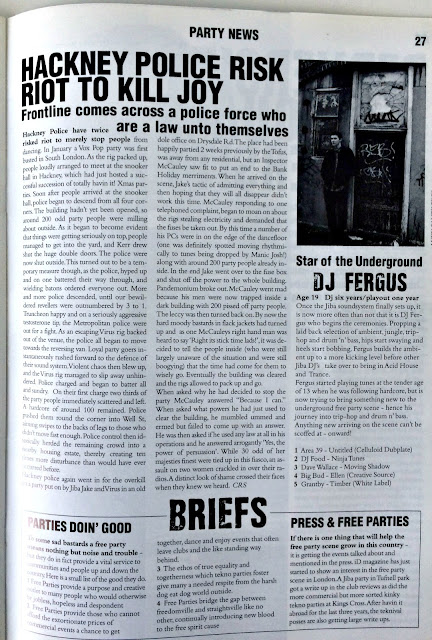 Hackney police have twice risked a riot to merely stop people from dancing. In January a Vox Pop party was first busted in south London. As the rig packed up, people loudly arranged to meet at the snooker hall in Hackney, which had just hosted a successful succession of totally havin it! Xmas parties. Soon after people arrived at the snooker hall, police began to descend from all four corners. The building hasn't yet been opened, so around 200 odd party people were milling about outside. As it began to become evident that things were getting seriously on top, people managed to get into the yard, and Kerr drew shut the huge double doors.  The police were now shut outside. This turned out to be a temporary measure though, as the police, hyped up and on one battered the way through, and wielding batons ordered everyone out. More and more police descended, until our bewildered revellers were outnumbered by 3 to 1.

Truncheon happy and on a seriously aggressive testosterone tip, the Metropolitan police were out for a fight. As an escaping Virus rig backed out of the venue, the police all began to move towards the reversing van. Loyal party goers instantaneously rushed forward to the defence of their sound system. Violent chaos then blew up, and the Virus rig managed to slip away unhindered. Police charged and began to batter all and sundry. On their first charge two thirds of the party people immediately scattered and left. A hard-core of around 100 remained. Police pushed them round the corner into Well Street, aiming swipes to the backs of legs to those who didn't move fast enough. Police control then idiotically herded the remaining crowd into a nearby housing estate, thereby creating 10 times more disturbance than would have ever occurred before.

Hackney police again went in for the overkill on a party put on by Jiba Jake and Virus in an old dole office on Drysdale Road. The place had been happily partied two weeks previously by the Tofus, was away from any residential, but an inspector McCauley saw fit to put an end to the bank holiday merriments. When he arrived on the scene, Jake's tactic of admitting everything and then hoping that they will all disappear didn't work this time. McCauley responding to one telephone complaint, began to moan on about the rigs stealing electricity and demanded that the fuses be taken out. By this time a number of his PCs were in on the edge of the dancefloor (one was definitely spotted moving rhythmically to tunes being dropped by Manic Josh!) along with around 200 party people already inside. In the end Jake went over to the fuse box and shut off the power to the whole building. Pandemonium broke out. McCauley went mad because his men were now trapped inside a dark building with 200 pissed off party people. The leccy was then turned back on. By now the hard moody bastards in flack jackets had turned up and one of the McCauley's right-hand men was heard to say "right, it's stick time lads!" It was decided to tell the people inside (who were still largely unaware of the situation and were still boogying) that the time had come for them to wisely go. Eventually the building was cleared and the rigs allowed to pack up and go.

When asked why he had decided to stop the party McCauley answered "because I can". When asked what powers he had just used to clear the building, he mumbled ummed and ermed but failed to come up with an answer. He was then asked if he used any law at all in his operations and he answered arrogantly "yes the power of persuasion". While 30 odd of her majesties finest were tied up in this fiasco, and assault on two women crackled in over their radios. A distinct look of shame crossed their faces when they knew we heard'.

Written by 'CRS'. Report from Frontline magazine, number 3, Summer 1996
(this was a zine that covered 'travellers, parties, protests') 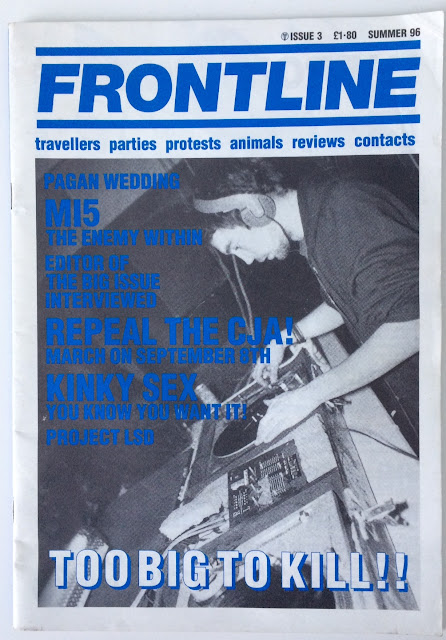