Another in the series of posts on the 1981 summer riots. Thirty years ago today, on 15 July 1981, Brixton exploded for the third time that year. Following the April uprising, and a second riot on the 10 July, police raided houses in Railton Road and sparked off more street fighting.

'Just as it looked at though there might be a lull in the violence - in fact there was one peaceful night on Tuesday 14 July — rioting returned to the streets of Brixton, after a police raid on eleven houses in Railton Road, the front-line. A total of 176 ofﬁcers were used in the raid, with 391 standing by, and the police said they were acting on a tip-off from a normally reliable source that petrol bombs were being stored in the houses. Armed with warrants for bomb-making equipment and illegal drinking the police smashed into the houses. According to the inhabitants, who later showed journalists around their damaged homes, the police wantonly smashed windows, lavatories, television sets and furniture with axes and crowbars. No bombs were found, although some days later the police had the compensation of ﬁnding a crate of bottles, with evidence that they were being prepared as bombs, on nearby waste ground. Local inhabitants were furious and it was also understood that Whitelaw [the Home Secretary] was very angry with the police. The raid had led to about £5000 of damage, which was met by the police, and to another night of rioting. Afterwards ﬁve people charged with possession of cannabis and one with obstruction. The police action was seen as a revenge for the April riots by the black community, particularly because it was directed at the little pocket of houses which forms the heart of the front-line'.

(Uprising!: the police, the people and the riots in Britain's cities - Martin Kettle and Lucy Hodges, Pan Books, 1982) 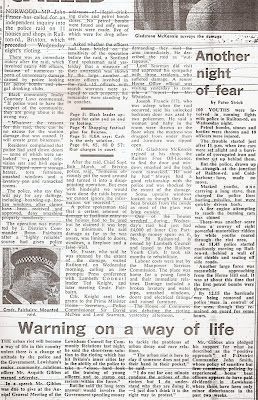 'Joseph Francis (17), who was asleep when the raid occurred, said his unlocked bedroom door was axed by two policemen. He said a woman and baby in the room were thrown to the floor when the mattress was dragged from under them and furniture was ripped open.

Mr. Gladstone McKenzie arrived at his shop, the Railton Free Off Licence, to ﬁnd the door and windows smashed and the back room ransacked. He said he had always had a good relationship with the police and was shocked by the extent of the damage. Some upstairs windows looked as though they had been broken from are inside as most of the glass was lying outside.

One of the houses wrecked during Wednesday's raid had just had £4,000 of Inner City Partnership money spent on it. No. 50 Railton Road is owned by Lambeth Council and leased to the Railton Youth Club...

100 youths were involved in, running fights with police in Railton-rd. on Wednesday night. Petrol bombs, stones and bottles were thrown and 10 officers were injured. The trouble started just after 11 p.m. when two cars were set alight and a barricade of corrugated iron and timber set up behind them.

But the police, drawn up in strength at the junction of Railton-rd. and Coldharbour-lane, made no move. Masked youths, one carrying a long stave, then charged the police lines, hurling missiles but were quickly driven back. A fire engine attempting to reach the burning cars was stoned. There was another scare when a convoy of eight powerful motorbikes ridden by white youths roared through the riot area.

At 11.45 police started cautiously moving up Railton-rd behind a wall of riot shields and sealing off side roads. Another large force was meanwhile approaching from the Herne Hill end. It was at about this time that the first petrol bombs were thrown. By 12.15 the barricade was being removed and police were in control of the area, though they remained on guard for some hours'.