1984 Chronicle of a Year Foretold: January

A chronology of events in the UK

1984 started with various strikes, including the early rumblings of what would soon become the national miners strike. The armed conflict was continuing in the North of Ireland, with the row continuing about the mass escape of IRA prisoners in the previous September. The movement against nuclear weapons was focused particularly on Greenham Common in Berkshire, where women had established a peace camp...

Tues. 3 January: 21 Greenham women arrested after sit-in at Little Chef restaurant in Newbury. They were protesting about being banned from the premises, the nearest to the peace camp [GH, 4 Jan)

Mon. 9 January: Sarah Tisdall, a 23 year old civil servant, charged under the Official Secrets Act  for leaking information to the Guardian last October about the arrival of cruise missiles at Greenham Common.

Mon 9 January: 24 hour strike against new working procedures by 1800 Edinburgh bus drivers, only three of whom turn up to work (GH)

Tues. 10 Jan: Motherwell District Council vote to ban a planned march by the Troops Out Movement, scheduled to take place in Wishaw on June 21 (GH 11.184)

Wed. 11 January: British Rail Engineering Ltd announces that 3500 engineering jobs are to be axed, on top of a similar number lost in the previous year (GH 12.1.84)

Mon. 16 January – Ford announce the closure of its Thames foundry in Dagenham, with the loss of 2000 jobs. They claim its is cheaper to buy in castings made elsewhere (GH)

Mon. 16 January – miners walk out at High Moor colliery in Derbyshire in protest at visit by National Coal Board chairman, Ian MacGregor.

Mon 16 January – 19,000 workers stage one day strike at Britain’s eleven Royal Ordnance factories, in protest against plans to privatise them.

Wed. 18 January: the national council of print union National Graphical Association agrees to purge its contempt of court in the Stockport Messenger dispute, effectively ending support for the dispute, which started in July 1983 with the dismissal of the ‘Stockport Six’ for striking at the newspaper owned by Eddie Shah.

Wed. 18 January:  James Prior,  Secretary of State for Northern Ireland, announced a public inquiry into the child abuse scandal at the Kincora Boy's Home in Belfast.

Fri. 20 January: nurses and other staff strike against the threatened closure of the Dreadnought Seaman’s Hospital in Greenwich [T.21.1.1984]

Sat 21 January  – Stokely Carmichael (now called Kwame Ture) refused entry to Britain when he arrived at Heathrow for a ten day speaking tour as a guest of Hackney Black People’s Association. He had last visited in 1983 and made speeches apparently supportive of riots. The Home Office declared that ‘his presence in the United Kingdom would not be for the public good’ (GH)

Sat 21 January: 500 people take part in die-in at Holy Loch, the US polaris missile base near Dunoon. 27 people are arrested (GH)

Monday 23 January: workers at Scott Lithgow begin a ‘work on’ with laid off workers reporting for work, and their wages being paid for out of a levy collected from other workers (GH)

Monday 23 January: 40 ferry services across the Channel and the Irish Sea are cancelled as 3,000 members of the National Union of Seamen stage an unofficial 12 hour strike against the closure of the Dreadnought Seaman’s Hospital in Greenwich (Times, 24.1.84)

Wednesday 25 January: Government announces ban on 7000 civil servants at GCHQ in Cheltenham from belonging to unions or going on strike (GH). They claimed the strike action by civil servants there in 1981 had put security at risk – seemingly the decision to ban union had been taken at the time, but was postponed until after the 1983 election (GH 1.2)

Thurs. 26 January:   The Hennessy Report, into the mass escape of 38 Republican prisoners from the Maze Prison on 25 September 1983, was published. Most of the responsibility for the escape was placed on prison staff. James Prior, then Secretary of State for Northern Ireland, stated that there would be no ministerial resignations as a result of the report.

Thurs 26 January: News International - publishers of the Times - dismiss 750 members of SOGAT 82, for taking part in a two week unofficial sympathy action in support of clerical staff striking over staffing in the library. The Times failed to appear for four days.

Thurs 26 January: tens of thousands of civil servants in DHSS offices and other workplaces walk out in protest at GCHQ ban.

Fri 27 January: workers occupy the Henry Robb shipyard, where 390 jobs have been cut as a result of decision to close: ‘A Royal Navy sub-marine, under repair at the yard, will not released by the men’ (GH 28.1).

Sun 29 January: 1500 -2000 people demonstrate at Cocksparrow fur farm in Warwickshire, surrounding the site and attempting to break through fences and police cordon. Mounted police are deployed and 25 people arrested (Hansard)

Mon. 30 January : The Prison Governors' Association and the Prison Officers Association both claimed that political interference in the running of the Maze Prison resulted in the mass escape on 25 September 1983. Nick Scott, then Minister for Prisons, rejected the allegations.

30 arctic foxes rescued from Cocksparrow fur farm near Nuneaton, and a similar number from Bould Farm, Oxford, in Animal Liberation Front raids (SO)

1000 demonstrate in the snow at new Hazleton vivisection laboratory in Harrogate; fences are pulled down and police snowballed (SO).

A while ago I put together a mix for Stefan Szczelkun's Agit Disco series of political music, which was later included in the book of the same name. Myself and various other Agit Disco selectors are taking part in a benefit for Housmans, the long established radical bookshop at Kings Cross. The event takes place at Surya, 154-156 Pentonville Rd, London N1 on Thursday 10th April, 7pm to Midnight. Full details follow... 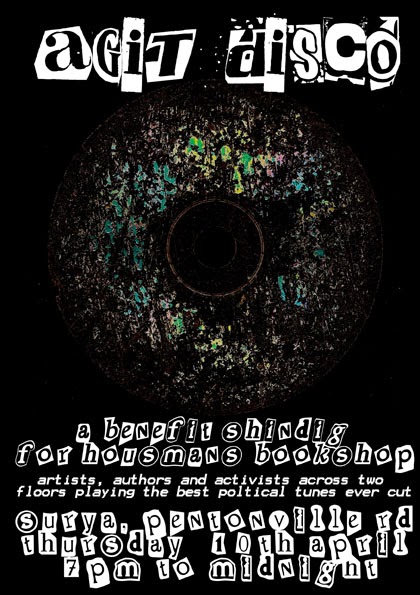 'We’d like to invite you to come along to a special fundraising DJ shindig, being put on by Housmans alongside the good people involved with the Agit Disco book (Mute Books 2011). We’ll be taking over both floors of local eco-music venue Surya, and filling it with guest selectors who featured in the Agit Disco book.

The music policy on both floors will be nothing but the best politically-charged tunes ever recorded.

Selectors on the night include:

Tickets can be bought in advance here via Eventbrite
www.eventbrite.co.uk/e/agit-disco-a-benefit-shindig-for-housmans-tickets-7135846509
Or can be bought on the door

Sian is a photographer and photo editor. Whilst researching her MA dissertation Sian looked into the history of the Welsh Not and became further interested in the oppression of Welsh Identity. Sian is a non-Welsh speaking Welsh person from Swansea.

An internet wizz kid designer and writer who has worked with Frank Zappa and Ian Drury amongst others. He is a collector of wax discs – which are all one-off recordings. One time member of the Ice Cream Yak Band. Life long inhabitant of Portsmouth.
www.Melspages.com

Martin was a Trumpet playing member of the Proles in the Nineties – but I didn’t know him then. I ‘met’ him thru Flickr as part of the Kennington / 56a Infoshop network. I was impressed with his archiving of the Proles old handmade flyers. Then he came to my 60th party where the Agit Disco 1 was played, took photos of the event and was enthusiastic about the project. He made selection 4 and then offered to make a website. Nine months later the website you are looking at was born.
www.mdx.org.uk

John is one of the founders of the reggae, dubstep and grime fanzine Woofah. He lives in Stoke Newington and writes at http://www.uncarved.org/blog

Co-manager of Housmans bookshop, and weekend producer and deejay.

Artist, writer, prankster, film maker, occasionally even a musician etc. His many books include ‘Cranked Up Really High: genre theory and Punk Rock’ Codex 1996. Home’s own punk slop can be found on the music CD ’Stewart Home Comes In Your Face’ Sabotage Edition 1998.
www.stewarthomesociety.org

Writes regularly for the papers Variant and Freedom. Many intriguing analyses of film, television, art, music and writing, with a deep insight into the workings of oppression. e.g. ‘Beautiful Struggles and Gangsta Blues’ [urban music review of the year 2004]. Variant, 22, February 2005.
http://libcom.org/
www.starandshadow.org.uk

Micheline is an activist and leader of the Inclusion movement in Britain. She started the Alliance for Inclusive Education. She is also a visual artist, poet, author, parent and co-counsellor. Her poems may be sampled on her website
www.michelinemason.com/topics/poems.htm

The co-owner of The Foundry, London – Tracey is a socio-political artist, arts lecturer & visiting lecturer in politics & activism. She hosted the Foundry’s Late, Late Breakfast Show on Resonance 104.4fm for 8 years. Her book Text-Me-Up! is published April 2011

Luca Paci is an Italian poet currently living and working in London.
http://rizomatic.wordpress.com/

Project originator. According to Clifford Harper I was talking about the idea of a political disco with Street Farmer Bruce Haggart over 30 years ago. Stefan is an artist and author currently working with video organised on DVDs as ‘active archives’. Producing a series about people power and counter cultures of the Nineteen Nineties.
www.stefan-szczelkun.org.uk

Sometime writer and trainee counsellor. Self-publishes occasionally as Break/Flow. Wrote regular reviews and articles in the experimental Techno zine, Datacide. Also published in Mute, NoiseGate and was on the Board of Dire Rectors of the Difficult Fun record label. See his new book: http://www.metamute.org/en/shop/anomie_bonhomie_other_writings

Neil Transpontine has written on music and politics under various guises for publications including Datacide, Alien Underground, Woofah, Mixmag, Eternity, Head, Trangressions, Practical History and Past Tense. He is largely responsible for the blogs ‘History is Made at Night: the politics of musicking and dancing’ and ‘Transpontine’ (South East London eclectica).
http://history-is-made-at-night.blogspot.co.uk/

Luminary and producer of Vague magazine at one time the glossiest fanzine in the land. Tom has been working with the pyschogeography of Notting Hill Gate where he lives.
www.historytalk.org
Posted by . at 3/17/2014 07:05:00 pm No comments: