Doing some research/recollecting the movement against what became the Criminal Justice and Public Order Act 1994 with its notorious police 'powers in relation to raves'. There were three large demonstrations against the Criminal Justice Bill/Act in London - on May Day 1994, 24th July  1994 and 9th October 1994.

This leaflet is for the second demonstration, from Hyde Park to Trafalgar Square on Sunday 24 July. Estimates of the numbers attending ranged from 20,000 (police) to 50,000 (organisers). 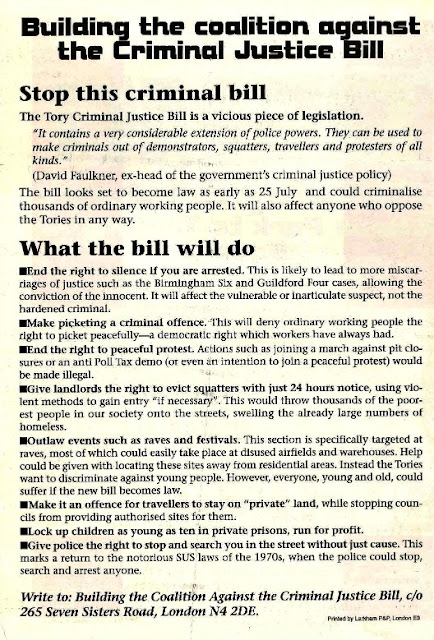 Politically there were a number of tensions - the established Left, the SWP in particular, had woken up to the emerging movement. Their organisational skills may have helped increase the turn out, but some complained that something that was fresh and creative was being funnelled back into the traditional routine of A to B marches with speeches at the end.

If there were any speeches at the end though, I certainly don't remember them. Trafalgar Square felt like a big party (though I don't think any sound systems were present other than cycle powered Rinky Dink), with people playing in the fountains on a sunny day. 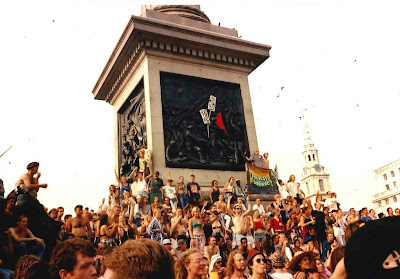 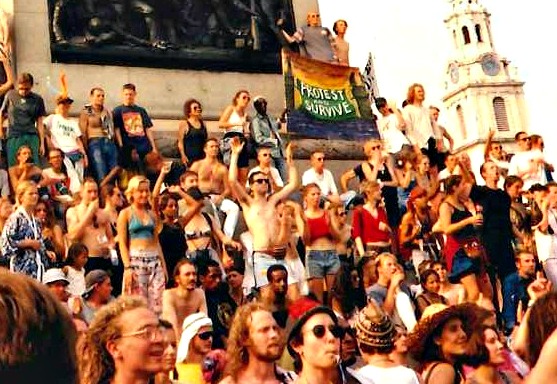 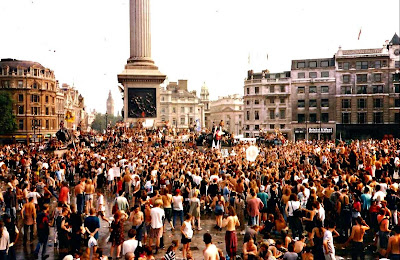 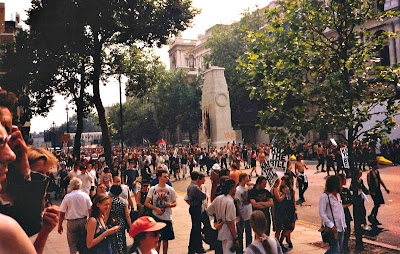 There were some clashes with police in Whitehall, after some people tried to scale the gates guarding the entrance to Downing Street. Police on horseback charged the crowd there, and 14 people were arrested. 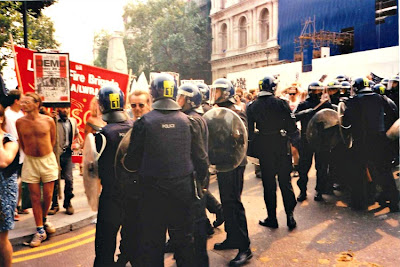 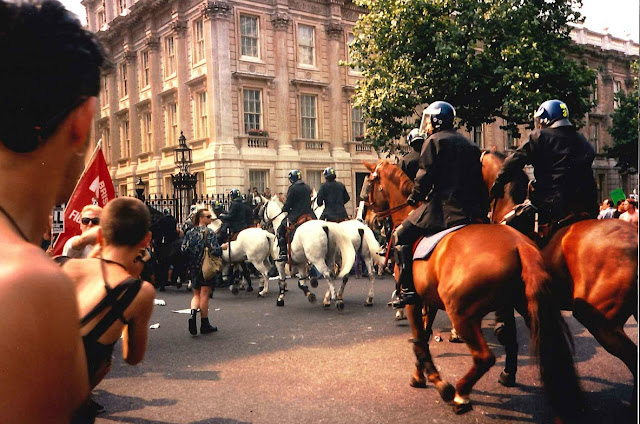 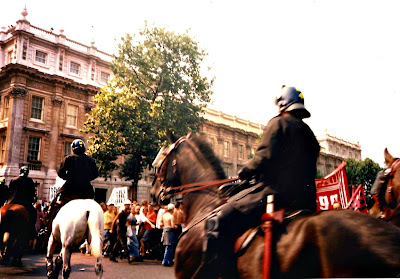 (all photos taken by me on the day - anyone got any memories of this demo or the others?  -more to come!)

See also: Report on this demo from Eternity magazine

This is one of my favourite headlines for a while, from Slate.Com:

'On the night of July 25, a 24-year-old man clutching a bag full of marijuana and ecstasy pills managed with relative ease to get on board an empty government jet used frequently by Chancellor Angela Merkel, while it was parked at a closed military section of the Cologne airport.

The man, a bodybuilder of Turkish descent named as Volkan T., proceeded to stage a raucous, one-man party. Reports said he stripped down to his underpants, sprayed fire extinguisher foam around the elegant cream and beige interior, pushed buttons in the cockpit, released an inflatable emergency slide and danced on the wing of the Airbus 319...

... he drove from his home in Cologne to the airport and got past a guard post by saying he had been invited to a wedding reception being held in the nearby officers' quarters. He then climbed a barbed wire fence, walked across the tarmac, clambered onto the plane's left wing and got in through an open emergency exit.

While playing with the cockpit buttons, he inadvertently triggered an alarm that was logged by military personnel at 8:40 p.m... Finally, at 12:16 a.m., dogs arrived to deal with the situation. Seven minutes later, Volkan T. was arrested, slightly injured from two bites to the leg. He has been detained in a secure psychiatric hospital ever since.


His antics put the plane out of action for several weeks and caused an estimated €100,000 ($133,720) in damage. The jet needed new carpet, a new coat of paint on its wing and a new emergency slide. It was declared operational again this week after a successful test flight'.