In 1936/37 there was a long and bitter miners’ strike in Nottinghamshire centred on Harworth colliery, sparked by the refusal of mine owners to recognise the miners’ trade union of choice. The incident described here took place at a dance the night after a conflict between strikers on the one hand and police and strike breakers on the other. 36 people were arrested over the week, with 12 people eventually jailed for up to two years for ‘riotous assembly’ (these charges related to the picket line clashes rather than the dance hall incident). 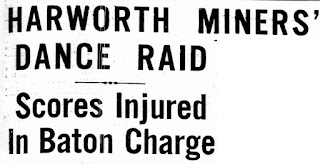 ‘The audience at the Harworth cinema was locked in last night prior to a police raid on the miners’ dance in the Market Hall a few doors away. Police went to the dance hall, arrested a number of men and then ordered the MC to get on with the dance.

Reinforcements of police then entered the small Town Hall, women dancers were separated from their partners, and what amounted to a pitched battle took place, the police freely using their batons. Men and women fought their way out into the narrow road way where the struggle continued for over 20 minutes.

Eye-witnesses report that injured men were lying all over the place. Women were crying, the whole village was in an uproar and the audience unable to leave the cinema. A call was sent out for Doctors to come to the village and attend to the scores of injured men. A number had to be taken by ambulance to the nearest hospital in Doncaster, nearly 10 miles away.

The five men arrested at the dance were charged at midnight last night before a special sitting of the Worksop (Notts) magistrates. They were Michael Kane, President of the Harworth branch of the Notts Miners Association, James Mould, Cornelius Fergusson, Frank Jobson and Samuel McCoombe and all were remanded in custody until Monday...

It is understood that warrants have been issued for the arrest of a number of other men, who are stated to be moving freely around the village but no attempt has yet been made to take any of them. Saturday night’s incident is the culmination to a very tense situation in Harworth during the past few days.

Following the national miners ballot declaration in support of the Harworth miners who have been out on strike 24 weeks in defence of the right to join the Notts Miners Association, the men remaining at work have adopted a very provocative attitude. Strikers pickets have been very small in number and members of the “chain gang” being escorted to the pit by the police have stepped out of the ranks and challenged individual members of the picket to a stand-up fight.

On Friday night a busload of scabs from Dinnington, Yorkshire were very provocative at the pit gates. Stone-throwing took place and every window in the bus was smashed. The police endeavoured to disperse the picket calling blacklegs who were off duty from the colliery company welfare club to their assistance.

The blacklegs brought with them billiard cues with which they struck at the strikers. A pitched battle ensued and the police and black legs retreated.

No arrests were made. On Saturday morning strong reinforcements of police were brought into Harworth by bus and cars... Everything was quiet during the day and the arrest of men at the dance, after they have been walking openly about the village all day long is regarded as particularly provocative. It will be recalled that the Council of civil liberties has already issued a report strongly critical of the police methods employed in this dispute, a state of terror having reigned in the village for nearly 24 weeks.

Women have been forbidden to go to the shops to make purchases, strikers attacked by scabs in their own gardens and young strikers waylaid and beaten up by gangs on the way home from neighbouring towns at the weekends’ [source: Daily Worker, 26 April 1937] 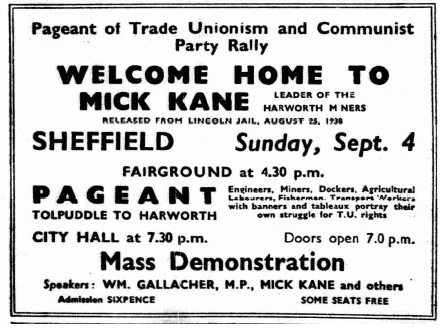 Mick Kane, arrested in the dance hall raid, was released from prison in August 1938 - marked by a demonstration in Sheffield (source: Daily Worker, 3 September 1938)

Posted by Transpontine at 12:38 pm No comments: