Continuing series of scanning in old flyers of things I went to in ancient times, or should I say documenting priceless cultural history artifacts, here's the programme for Hackney Volcano Festival held on Hackney marshes in August 2000.

This was a legal free festival, seemingly with some Millennium related funding, but featured lots of performers, sound systems etc. from the free party, punk and other scenes. The line up included for instance Luton's Exodus Collective, Out of Order Sound System (with Liberator DJs), Hackney punk system Reknaw and Homegrown radio (UK hip-hop). Reggae writer Penny Reel was on the Solution Sound System and Bobby Friction was on 'Purple Banana's Conscious Clubbing stage'.  Squatting/festival magazine Squall was trying to 'put some revolutionary stance back in the dance' and bands included benefit gig stalwarts P.A.I.N., Inner Terrestrials and The Astronauts. Quite a cross section of turn of the century London musical subcultures. Shame I can only really remember the Miniscule of Sound - 'the world's smallest nightclub' -  a tiny booth with a disco ball! 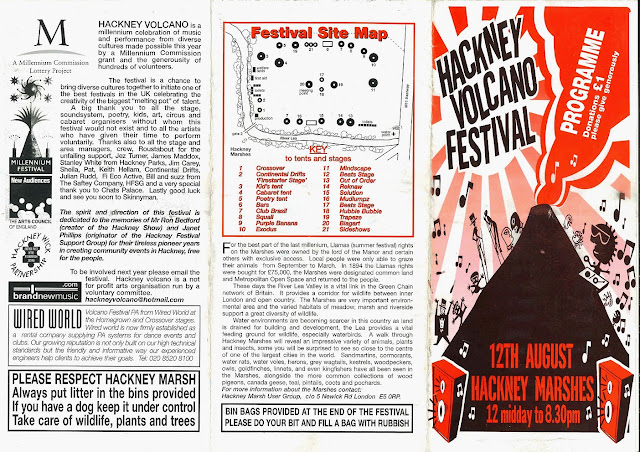 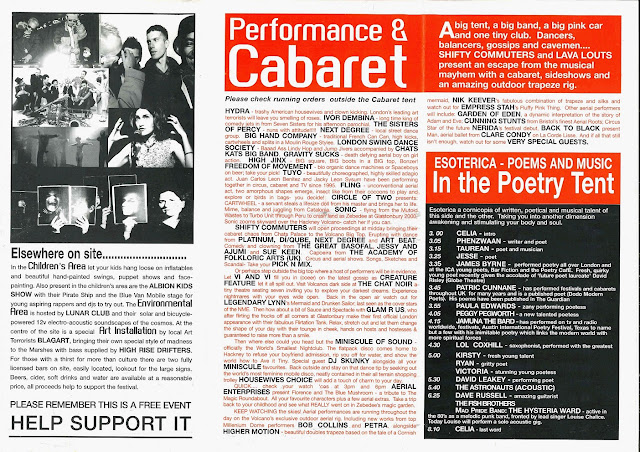 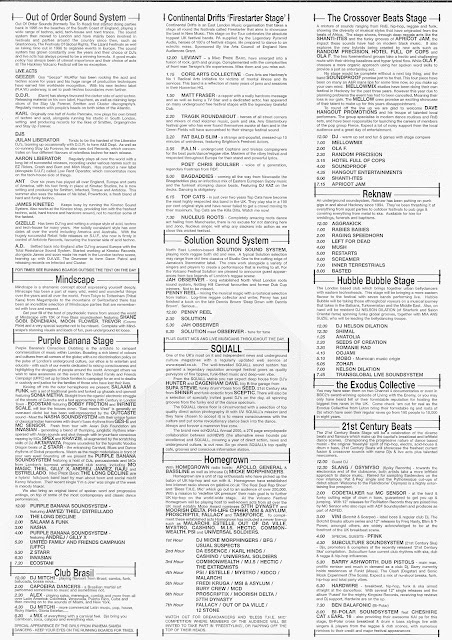 'Nobody can take away the dances you've already had' 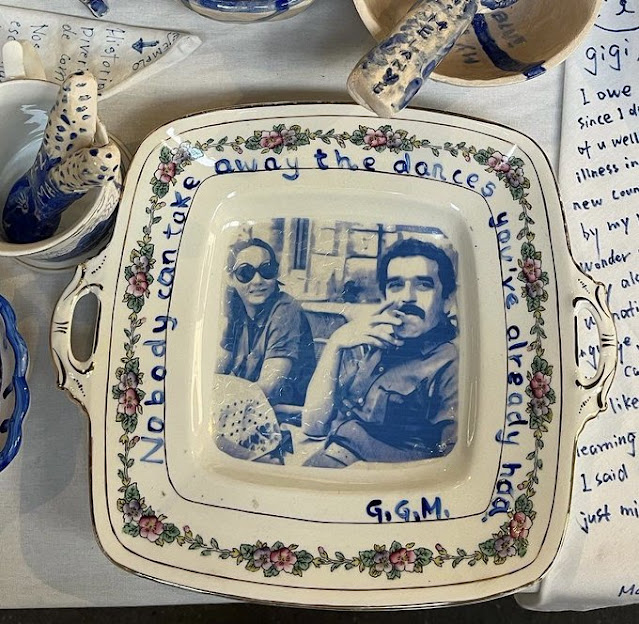 'For dancing in the streets' - solidarity with revolt in Iran

The 'Women, Life, Freedom' revolt in Iran is an inspiration. I can only express my solidarity for those who have taken to the streets following the death of Mahsa (Jina) Amini at the hands of the Guidance Patrol morality police, after she was detained because of how she was dressed (specifically for not 'correctly' covering her head).
So many others have been killed since, here's just some of those named so far: 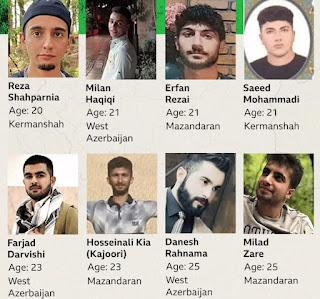 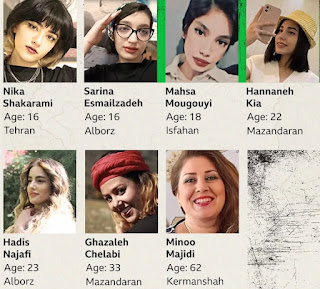 Let us never forget them, or Asra Panahi, a 16 year old killed after refusing to sing an anthem in support of the regime 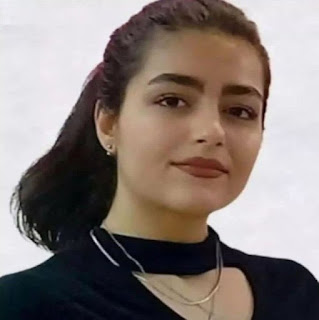 In a state which polices music and dancing so heavily it is no surprise that these are being forcibly expressed in the protest movement, most notably in Shervin Hajipour’s “For…” which makes a song out of tweets posted by people about what they are fighting for: ''For dancing in the streets,  For the fear we feel when kissing a loved one, For my sister, your sister, our sisters...For women, life, freedom
Interesting piece here by Omid Hessamian, 'Shervin Hajipour’s “For…” and the History of Iranian Protest Songs'
Echoes too of the 'dancing is not a crime' movement following the 2018 arrest and jailing of Maedeh Hojabri for instagram posts of her dancing. This piece, 'Dancing Tehran: Iran's Women Make A Stand' features women dancing in defiance and solidariy intercut with videos made by Maedeh Hojabri.
Update December 2022:
Mahsa Amimi remembered in London (Shoreditch) 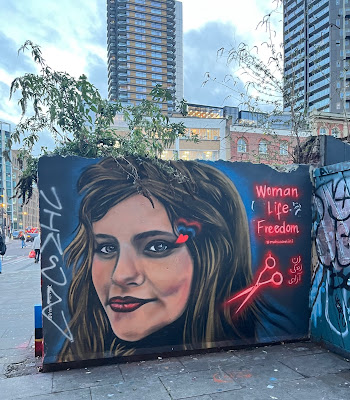 I was in Hackney recently for a Hackney radical history walk/talk and went past the Pembury Tavern on Amhurst Road. The pub has been there since 1856 and has witnessed much of the history under discussion. It has certainly changed since I first went there in the early 1990s and is no longer full of squatters - but neither is Hackney! No doubt it has always changed to reflect the changing locale and it was good to see that it still seems to be flourishing - now of course a home to craft beer (it is linked to Hackney based Five Points Brewing Co.) and pizza. 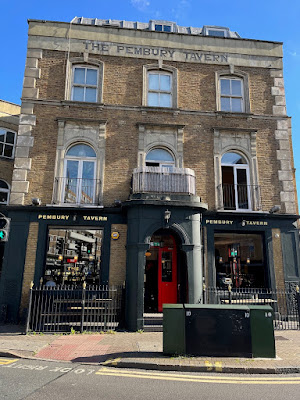 Anyway I came across a flyer from a night there in December 1998:  High-Rise 'Freestyle underground sounds every Thursday at the Pembury Tavern'. My friend Laurel from Luton ('Flo Hrd' junglist) was involved and it was another of our Luton friend's birthday (Kim). Hence I played a short set as Neil Disconaut, can't say my mixture of space disco and Ambush records breakcore exactly set the place alight but hey. 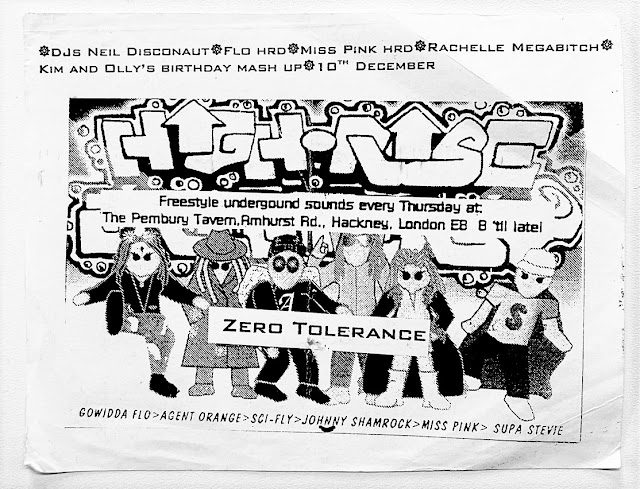 The Pembury was a regular venue for benefit gigs around that time. This listing from radical zine Contraflow from Autumn 1997 for instance highlights several gigs there, including benefits for Reclaim the Streets, Hackney Refugee and Migrant Support Group, the Autonomous Refugee Centre Hackney (ARCH) and Contraflow itself. Head Jam, PAIN, Inner Terrestrials in the house, not to mention Radical Dance Faction, Dead Dog Mountain and Tofu Love Frogs in the area. 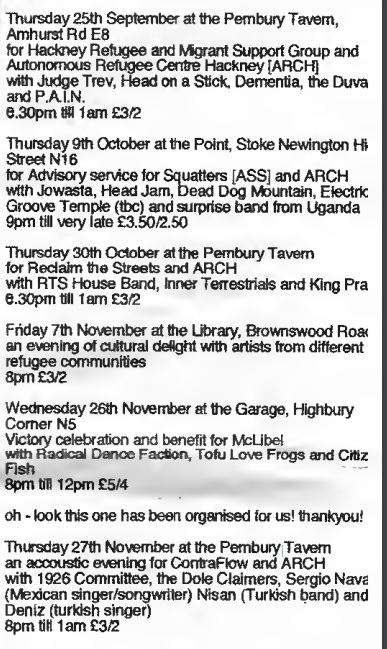 After first writing this I came across this mention of the Pembury in an interview with Class War founder Ian Bone in Freedom magazine (vol 82:2, 2022/23), where he talks about Hackney in the late 1980s/early 90s:
'The Pembury (pub) was like a sort of red base, with squatters, red actionists and class warriors, also a palpable anarchist community, like maybe there'd been in Brixton in the early '80s, lots of anarchists per head of the population and a lot of little magazines like Hackney Heckler, loads of other stuff, a very vibrant scene. There was the music scene, then we'd do stuff like chase the housing manager down the road. Yeah, people were declaring it the People's Republic of Hackney'. 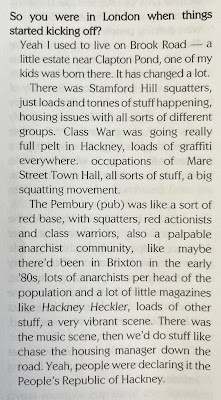 Good to see some old friends on the 'radical history faction' walk, some of whom were involved in some of those things mentioned above. There were various tales of poll tax protests and squatting adventures including the occupation of the empty London Fields Lido which helped prevent it being demolished and turned into a car park. 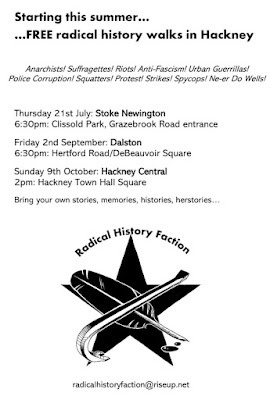 'We are dancing strong': A free festival on Hackney Marshes, 1997

The rather grandiosely titled Free Festival of Human and and Environmental Global Rights was a one day legal free festival held on Hackney Marshes on 20th July 1997 (a similar event had taken place in Finsbury Park the year before).
My diary note: 'We met outside the dub and roots tent. The sound systems were arranged in a line along one side of the park, ranging from a stage with punk bands, through various house and techno line ups, a drum & bass system and a more eclectic tent which seemed to be playing everything from Stevie Wonder to sort of Latin Jazz (the DJ was wearing a huge sombrero). With so much in such a relatively close space it was possible to listen to several sounds at once depending on where you were standing. We took kids dancing on our shoulders at the Big Sexy Festy Party sound system. The crowd wasn't as big as last year's in Finsburty Park, but it was nice and relaxed in the sunshine. At one end of the site were circus performers. There was a trapeze and stilts, but not much action while we were there, although four women in white dresses and silver foil angel wings emerged and ran into the dancing throng and there was also a giant robot marching around on stilts' 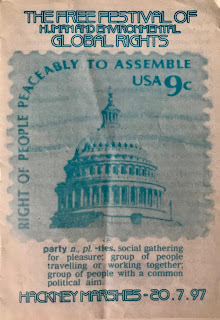 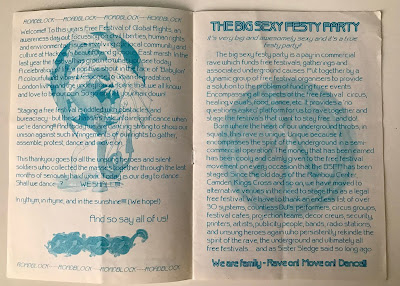 'Staging a free festival is riddled with obstacles and bureaucracy - but these hassles pale into insignificance when we're dancing. And today we are dancing strong to show our unison against such infringements of our rights to gather, assemble, protest, dance and move on' 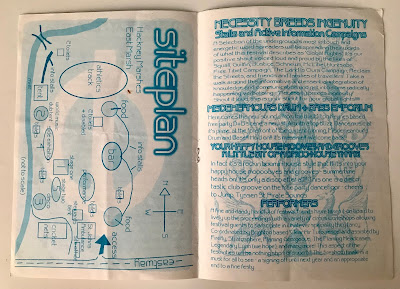 There were stalls there from various groups including Reclaim the Streets, Justice (Brighton anti-Criminal Justice Act group), Squall (squatting/counter culture paper), Friends and Families of Travellers and the Free Tibet Campaign. 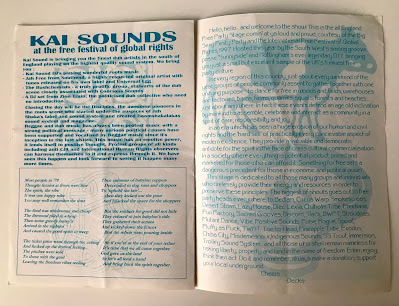 Kai Sounds ran the dub stage, with Jah Free from Southend, the Bushchemists, the Disciples and a Zion Train DJ set.
There was also a free party sound system stage, as explained in the programme:
'Hello, hello and welcome to the show This is the all England Free Party Stage comin' at ya loud and proud, courtesy of the Big Sexy Festy Party and the International Free Festival of Global Rights, 1997. Hosted this year by the South West's smiling groove posse Sunnyside and Nottingham's ever legendary DIY bringing you just a small but excellent sample of the UK's funkiest free party culture.
In every region of this country just about every weekend of the year, groups of people commonly assent to gather together with one unifying purpose to dance for free in woods and fields, warehouses and factories, barns, farms, quarries, squats, forests and beaches. just about anywhere. In fact these events defend an age old inclination by mankind to assemble, celebrate and interact as a community in a
spirit of care, responsibility and joy.
In an era which has seen a huge erosion of our human and civil rights and the hard sell of practically every conceivable aspect of modern existenve they provide a valuable and democratic
antidote for the spirit in the face of crass cultural commercialisation.  In a society where everything is potential product, priced and marketed for those who can afford it, something for free sets a
dangerous precedent for those in economic and political power,
This stage is dedicated to all those many groups and individuals who tirelessly provide their energy and resources in order to preserve these principles. The biggest of shouts goes out to free party heads everywhere; to Bedlam, Circus Warp, Smokescreen, Desert Storm, Lazy House, Disc-Lexia, Chilholm Tribe, Freebase, Fun Factory, Sacred Grooves, Discord, Slack, BWPT, Stroudoss, Mutant Dance, Vibe Positive Sounds, Pulse, Rogue, Spoof, Fluffy as Fuck, TWAT, Toe-to-Head, Pineapple Tribe, Exodus, Chiba City, Misdemeanor, Indigenous Sounds, 55 Trout, Immersion, Trolley Sound System and all those who shall remain nameless for risking liberty, property and land in the name of freedom .
Enter, enjoy, think then act. Do it and remember, always make a donation, support
your local underground' 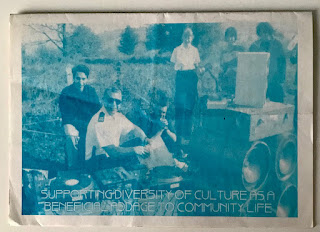 The East London Gay Centre was at 19 Redmans Road, Stepney in the 1970s. As this report from 1976 describes it faced sometimes violent hostility, some of it seemingly organised and quite possibly by the far right that had a significant presence in that area at the time. In this instance 'an apparently organised group of men ran up the road shouting fascist slogans and throwing pub glasses and beer bottles' while a small party was going on at the centre.
The centre was a place where people lived as well as socialised, and this article seemingly written by a resident suggests that this was central to being able to live an authentic life - 'Even with gay bars and clubs you can limit your gayness to one night a month or a week, and limit being gay to having sex. But you're not just gay every night at the club or when sleeping with another woman, you are gay the whole time... This is then the first point of living gay centres - by living with other gay people you can be gay the whole time' 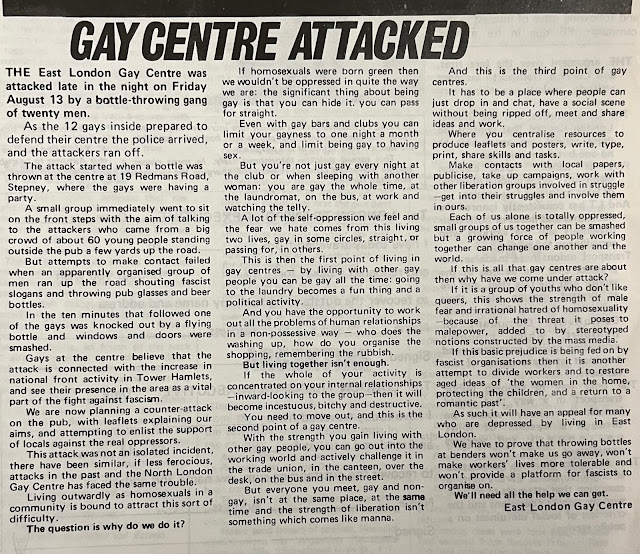 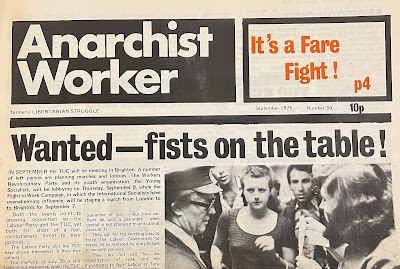