The second in a series of posts on the 1981 summer uprisings in England:

Night number two was in Toxteth, Liverpool, 30 years ago on Saturday July 4 1981. In fact the trouble had started the night before, on the same Friday night that Southall had exploded. Police had tried to arrest a young black man on a motorbike, but a crowd rescued him. There was a couple hours of street fighting between police and young people.

But it was on the Saturday and Sunday nights that arguably the most intense rioting of 1981 took place:

'last night [Saturday] police officers investigating reports of a stolen car were attacked with bottles and stones. A crowd of 150 black and white men took control of Upper Parliament St, set up barricades using overturned parked cars. Police took cover behind riot shields but were overwhelmed by the bombardment of missiles. A BBC camera crew were chased by a masked gang brandishing pick-axe handles who took a £12,000 camera and destroyed it' (BBC News, 5 July 1981). 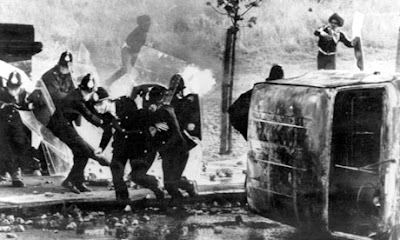 'The next evening [Saturday] rioting erupted on a huge scale. Barricades were built with overturned cars and a builders’ compressor; scores of petrol bombs were thrown at the police; rioters donned Ulster-style masks to avoid identification. The police could not cope. The press reported, ‘the police produced a show of force sufficient to enrage the black population, but not enough to quell the riots’.

The streets were barricaded again the next night [Sunday]. 'By then as many whites as blacks had joined the rioting' (Guardian). The rioters seized a fleet of milk floats and a concrete mixer to drive at the police lines, forcing the 800-strong force to retreat. Several buildings were burnt down, including the National Westminster Bank and the businessmen’s club, the Racquets. With the area clear of police, ‘there was an assumption that anyone who was not police would help themselves’ in the wholesale looting of shops. [Guardian] Reports told of middle aged women, white and black, queuing with shopping trolleys to loot supermarkets. Of the rioters, ‘fewer than 40% were black’. [Guardian] The deputy chief constable, Peter Wright, made it clear that ‘at the savage climax of the trouble, the rioters were mostly white.’ There were smaller, ‘imitation’ disturbances in white areas like Kirkby, Scotland Road, Walton, Woodchurch and Birkenhead.

The rioting began to die down the next night. By calling in the police from as far afield as Manchester, the authorities were able to regain control of the Toxteth area. That night the rioting tended to be in the white areas on the edge of Liverpool 8, away from the storm centre of the Saturday and Sunday night'(Chris Harman, The Summer of 1981: a Post-Riot Analysis, International Socialism, Autumn 1981)

'The real crescendo came on Sunday night when the 800 policemen were totally overwhelmed by hundreds of black and white youths and resorted to the use of CS gas, the first time it has been used against rioters on mainland Britain. The police admitted during the night that the rioting was out of control and called in reinforcements from Lancashire, Cheshire and Greater Manchester. Rioters commandeered milk floats, a stolen fire engine and a cement mixer and drove them straight into police lines. They were armed with every conceivable weapon, including lengths of scaffolding which they thrust at the riot shields like medieval knights... At one point they managed to seize a hire hose which the police had been using on them and turn it on the officers. Faced with this attack, the police had no alternative but to retreat, leaving behind them a no-go area open to a crowd of jubilant looters' (Uprising!: the police, the people and the riots in Britain's cities - Martin Kettle and Lucy Hodges, Pan Books, 1982)

According to the police, 781 policemen were injured during the rioting, and there were 1070 recorded crimes and 705 arrests. Civilian casualties included at least two seriously injured when they were hit by CS gas canisters - the projectiles fired were designed to pierce doors in siege conditions, rather than for crowd control.

See also Cook Da Books - Piggie in the Middle Eight, a song about the riots by 1980s Liverpool band.

Good stuff. I've always maintained it takes riots to really move things along - Stonewall, May 68, '81, Poll Tax, and recent student ones that re-galvanised youthful radicalism. I'd argue extending the franchise and basic rights has always hinged on riots. It's where the marginalised and directly oppressed assert that the 'public sphere' belongs to everyone. MLK's "language of the unheard".

The '81 riots really did force the police to lay-off to some extent, and brought public investment for facilities, legal advocacy and urban regeneration. However flawed, it was clearly better than what was on offer beforehand.

BTW if you know of any theoretical literature on riots, I'd appreciate any tips. I've always been fascinated by their function as a progressive force.

Chris Harman on Brixton Riots in International Socialism journal no.14 1981 and EP Thompson's 'Moral Economy of The English Crowd in the Eighteenth Century' in the excellent 'Customs In Common' is justly well known and inspiration for a great of social and labour history that has sought to excavate the hidden social history of riot and tumult in Britain. Incidentally this year is not only the 30th anniversary of the 'Liverpool 8 Uprising' but also the centenary of the 1911 Liverpool general strike - here two workers were shot dead by soldiers (sent by Home Secretary Churchill) and days later in the national strike, two workers were shot in Llanelli - the last civilians killed on mainland Britain by the army.

It's definitely a 'hidden' history in danger of being wiped away by the usual suspects. There's enough living memory to keep it alive for now, but I wonder for how long. The restructure of public space and residential areas (especially in inner-cities and city centres) definitely has 'crowd control' in mind. A case of space affecting time.