'Because all these serious faces’ll drive you mad, the only meaning is without meaning– Music blends with the heartbeat universe and we forget the brain beat' (Jack Kerouac, Desolation Angels, 1965)

Playwright and actor Steven Berkoff (b.1937) wrote an autobiography 'Free Association' in 1997. Born in a Jewish family in Stepney (his father was a tailor), he spent his teengage years on the Woodberry Down Estate and hanging out around Stamford Hill (he went to Hackney Downs School, as did Harold Pinter). The book includes some great descriptions of going out dancing in London in the early 1950s, in particular at the Tottenham Royal, the 51 Club in Soho and the Lyceum Ballroom. 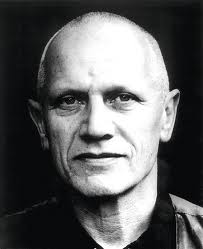 'I recall in my youth the extreme beauty of some of the men and women, the sharply fierce eyes and beautiful peach-like skins and the men with their handsome Celtic faces. They would gather together like warring clans at the weekly stomp at the Tottenham Royal,which was run by Mecca. I was to write a short story about that  dance hall called Mecca - it was published in my collection Gross Intrusion. What an ironic title, Mecca Dance Halls, for it was indeed our Mecca and the weekly call to nature was as primitive as the herds of rutting deer that would gather on the Scottish moors for their mating, selecting and challenging.

It was the golden time, the weekend when the coarse and unsatisfying work had been shed and the day-to-day dose of humiliation was over, at least for me, and one could wash the week away, in the ‘neutral’ environment of the Mecca. All men and women were equal there, since the humbling work you did during the week mattered not at the Mecca. Your schooling might be shabby and abrupt, your teachers callous and indifferent, your hopes no higher than to be cannon fodder for industry and factories if you were a native, and if you were a second-generation immigrant you might be absorbed into the skills the migrants brought with them and be a worker in the garment industry, a cutter, tailor, presser, or as in my particular case, a a ghastly menswear shop.

In the Royal, Tottenham, you were you wished to be - warrior, lover, Jimmy Cagney, Tony Curtis, villain, spiv, leader, loner, heavy, Beau Brummell...

....on Saturday we could forget all these other struggles, the dead and stultifying world outside in which you had to assert yourself with the blunt instruments of a poor education and little guidance and the hope of becoming a taxi driver or the manager of Cecil Gee’s Menswear. Now all that was behind you and in your drapes and rollaway Johnny Ray collar you spraunced into the Mecca with the expectation of a dream. Anything could and would and did happen, since the Mecca played into your hands: it was the greatest money-spinner of all time because it restated and restored the tribe and tore away the constraints of the civilized world of work and buses and factories. Here you could be who you thought you were. You created yourself. You were the master of your destiny. You entered quiffed and perfumed in the most expensive aftershave Boots had to offer. You entered and already the smell of the hall had a particular aroma of velvet and hairspray, Brylcreem and Silvikrin, lacquer, cigs, floor polish...

First you go and deposit your coat and then jostle for a square inch of mirror so as to adjust your phallic quiff, which has to protrude enough for it to be stable, until your very arm aches and you have to lower it to restore the blood supply. Many arms were crooked and like birds we were preening and pecking. In the ladies' I imagine even more complex rituals were going on, since this was the sea of flesh, a virtual harvest of all the young, bright, beautiful, sweet, delicious and not-so-beautiful and not-so-delectable, but at least the energy of all that youth swarming together in the Mecca was formidable...

...every night at the Royal was a dream time. You walked as if in slow motion and got there early so that you stood a good chance of pulling some sweet, delectable creature, had a good dance and swanned around. The dance was all-important since this was a way of demonstrating your skill as a mover, your grace, wit, balance and tricks. The jive was one of the greatest dance forms ever invented. And so all your arts were in some way fulfilled. You were the dandy, the mover and performer in your own drama, the roving hunter and lover, the actor adopting for the girl the mask of your choice. You wore your costume and walked the hall beneath the glittering ball and when you saw someone that you felt was about your stamp you asked her for a dance; if it was slow, when you took her on to the floor your heart started to increase its beat...

When you entered the Royal, the band, usually Ray Ellington, would be up the far end. The Stamford Hill crowd would stand on the left-hand side and the crowd from Tottenham would stand on the right; there would be no mixing unless you felt cocky and wanted to fraternize; in that case you elected yourself to the position of leading luminary and went to pay your respects. Dancing was the thing and as the clock ticked away until the terrible hour of 11  p.m. when the band would stop, you became more and more desperate to find someone you could take home and crush for half an hour of fierce kissing and squeezing and creating sparks as your gaberdine rubbed against her taffeta'.

I learned to jive at a formal session which a young teacher called Leslie taught at a small jazz club in Finsbury Park. I don’t remember who took me there or how I heard about it. In one corner of the room (and I now remember the room was walled with mirrors - it must have been a small ballet school in more genteel times) was a record player and Leslie would show us the basic one-two-three-four.

Once we had mastered this very simple rhythm, the next step was to guide the woman while in a kind of side-to-side locomotion our arms would spin her like a top. With the determination that was to be a hallmark of my youthful endeavours, I threw myself into the jive and practised night and day to work it out in mirrors, on door handles and on a current girlfriend, a flaring redhead who I met on the Hill. She was from the other side of the manor, which was bad news for both of us, but at that time we were mainly concerned with getting the jive together.

After a while I got into the swing of it and Greys Dance Hall became my weekly Tuesday night session. A kind of Finsbury Park clan would gather there. When you came in there was a little bar where you could buy sandies, tea, coffee and soft drinks. The place had a weird and pregnant atmosphere, not least because Curly King would turn up from time to time and it was also the time I first glimpsed the Kray twins. They were always immaculately turned out in dark suits and ties...

...Sunday was Lyceum night, but you could always do some hopping at the 51 Club in Little Newport Street. That was good for jazz and they played the best records and you danced your feet off. I did less and less exercise at school I made up for it by jiving, at which I was becoming a veritable Gene Kelly. 1 had perfected my jiving via Leslie at Grays, Finsbury Park, fine-tuned it at the Royal [Tottenham] and let it go at the‘51’.

It was my sanctuary. A small dark room with some of the best dancing to be seen in the West End. I would come home some nights soaked to the skin and it was even better than sex. I evolved a style that was ultra cool. By this time the Johnnie Ray era had been replaced by Teddy Boys and you wore four-button suits, shirts with stiff collars and double cuffs. My collars were sent each week to ‘Collars Ltd’ for starching and laundering, and woe betide if the collars came back soft or not stiff enough. I would go bananas. The style of dance was affected by the suit you wore and so you had to lift your arm, keeping your elbow fairly well in to your side or your jacket would be pulled up and you would appear ungainly. No, you had to dance cool so as to keep the form intact.

It was a brief but unique period in English social and fashion history, since it twisted the jive away from its American cousins and adapted it to fit into an idiosyncratic London style. The chaps at the Lyceum became fops and Beau Brummels and the suit was more than ever your calling card or your place of esteem. You had to be immaculate'.
Posted by Transpontine at 6/05/2013 09:34:00 pm 6 comments:

Ryan takes ecstasy and other US presidents

Struggling to remember the names of Cold War US presidents? Here's a handy South London mnemonic taught to my daughter by her history teacher!

Protests are spreading across Turkey following the violent police assault on the Gezi park occupation on Taksim Square in Istanbul city centre. At least 100 people have been injured as gas and water cannon have been deployed against people protesting against the demolition of the park to build a shopping centre. 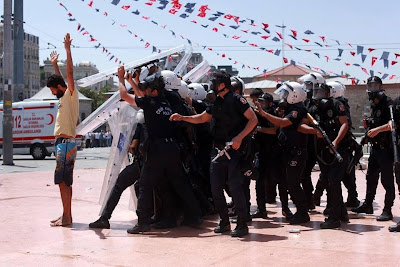 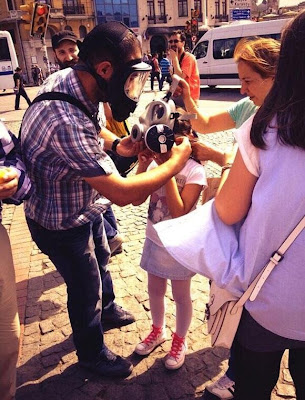 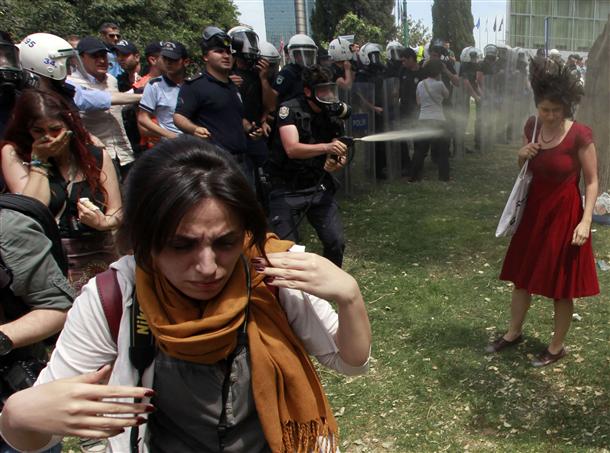 
Earlier, occupiers had put up tents and had the usual occupy mix of meetings, discussions, music and hanging out.﻿ 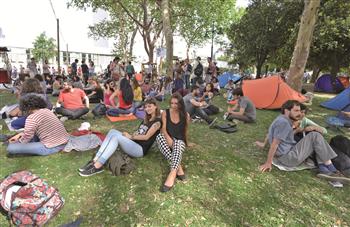 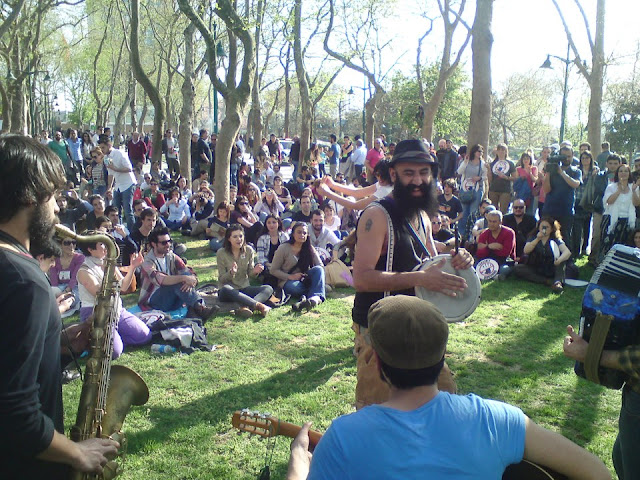