I have taken part in many May Day celebrations large and small, but the biggest was certainly in Dublin in 1994. The occasion was a huge parade to mark the centenary of the Irish Congress of Trade Unions, I believe it was actually held on Monday 2nd May 1994, notable as the first May Day bank holiday in Ireland.
It was more a celebratory affair than a demonstration with a spectacular street theatre pageant. It looked great, and in the evening there was a fantastic open air gig with a rare (for then) appearance of Moving Hearts, some songs from Christy Moore, and 1990s favourites The Saw Doctors. I ended up with friends and a guitar singing rebel songs in a pub.
There's some RTE footage of the event online; here's a few photos I took on the day: 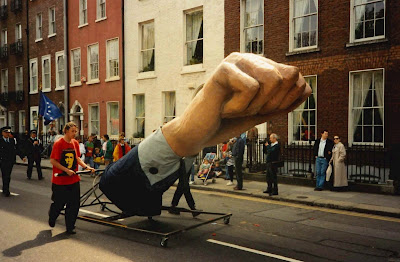 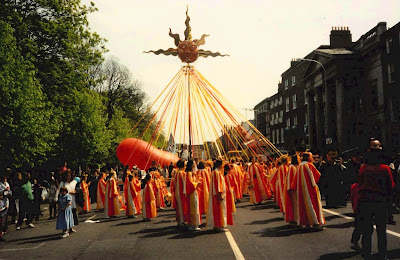 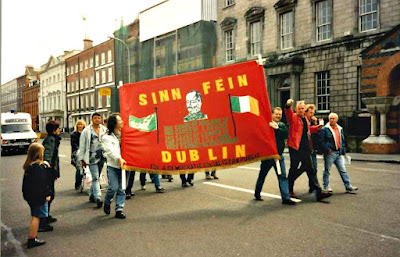 Still it was also a dangerous and tragic time in the North, with the Irish Peace Process inching forward towards an IRA ceasefire later that year while loyalist killers seemed to be stepping up sectarian attacks.  The following month saw the UVF kill six people watching a World Cup match at a bar in Loughinisland.
In Dublin we stayed for the weekend with some Irish friends we know from their time in London and who had moved back home. They had been involved with the Troops Out Movement in London, which I was a member of. I was also active in Justice for the Casement Park Accused which campaigned around an infamous miscarriage of justice in Belfast.
That weekend in Dublin we went to an an event in a hotel where long time Troops Out Movement member Nina Hutchinson was being honoured for her support for Irish prisoners in English jails (I will write more about Nina another time). The 'Gathering of the Clans' brought together families of prisoners. 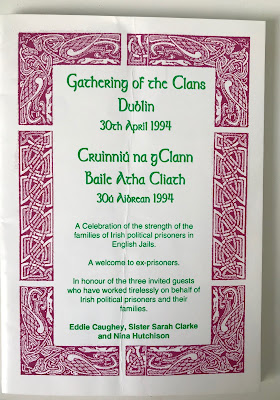 After it finished some of us went on to an after party in the far-famed Ballymun Flats, late night drinking with ex-prisoners amongst others. The next day we went to the Widow Scallans pub in Pearse Street for a drink, followed by the May Day parade on the Monday.
Later that month, on the 21st May, the band The Irish Brigade were playing a benefit gig at Widow Scallans for prisoners in an event organised by Sinn Fein's Prisoner of War department. There were hundreds of people inside. Two UVF members approached the bar with a bomb, intending to place it inside but were blocked by one of the stewards, Martin Doherty. Doherty was shot dead but he managed to prevent them getting in and they abandoned the bomb and fled. Had the bomb exploded inside the pub, there would have been a massacre and no doubt many of the people we had met on that May Day weekend would have been killed or injured (I later heard that Doherty, who was from Ballymun, had been at that party).
[I recently donated some photos and papers to the MayDay Rooms in London for their archive of Troops Out Movement and related materials. If you have anything you can share with them get in touch with them. This post is one in a series where I contextualise this material with my recollections]
See also:
The Hunger Strike, the Irish War and an English Town: Luton 1980-81
Remembering Bloody Sunday
Posted by . at 5/19/2022 07:57:00 am No comments:

The Police, Crime, Sentencing and Courts Act 2022 is now law, bringing in new police powers summarised by Liberty as including:
Creating a ‘buffer zone’ around Parliament.
Giving police power to impose noise-based restrictions on protest.
Criminalising one-person protests.
Giving police power to impose restrictions on public assemblies.
Creating the offence of wilful obstruction of the highway.
Powers to criminalise trespass.
No sooner has it passed than it was announced in the Queens Speech this week that one of the Government's key forthcoming priorities is to pass yet more laws against protests.
None of this is really about police 'needing' new powers  - they have for instance had the power to arrest people for obstructing the roads for decades. As with the inhumane plans to deport asylum seekers to Rwanda, this is a theatre of performative cruelty which aims to appease and politically mobilise that section of the population that seethes and resents those seen as 'other' and bringers of social, demographic or political change. But the Government is clearly trying to create a hostile environment for protestors after several waves of inspiring demonstrations over the past couple of years.
Here's a selection from the movements since 2020, as seen from London.
Black Lives Matter
The police murder of George Floyd in  Minneapolis on May 25th 2020 sparked a global wave of  Black Lives Matters protests. One of the biggest in London took place on 7 June 2020 with at least 50,000 people starting out from near the American Embassy - crowd seen here heading on to Vauxhall Bridge. 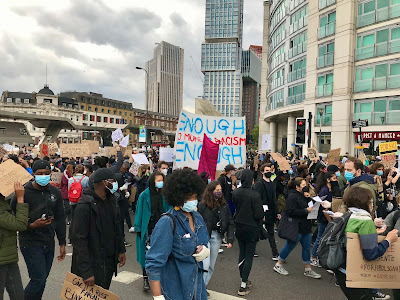 Sarah Everard Protests
The murder of Sarah Everard by a serving police office in March 2021 saw the heavy handed policing of a vigil at Clapham Common (near where Sarah was kidnapped) and many local protests against rape and sexual violence, including walk outs from some schools. Picture below is of school students in Trafalgar Square in April 2021.
Kill the Bill protests
What was originally known as the Policing Bill met with a movement of opposition including riots in Bristol in April 2021 (for which 12 people are currently in prison) and protests in many other places. Pictures below are from London demo from Hyde Park, April 2021. 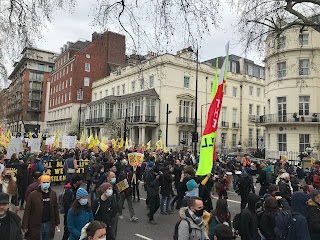 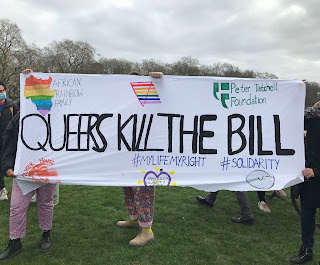 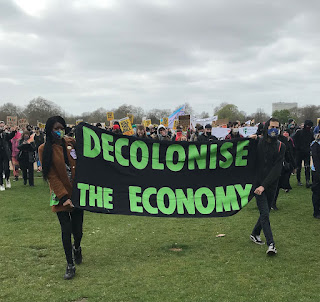 Kill the Bill posters (these were flyposted around Brockley, South London): 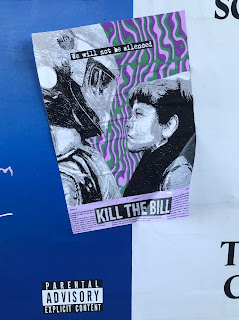 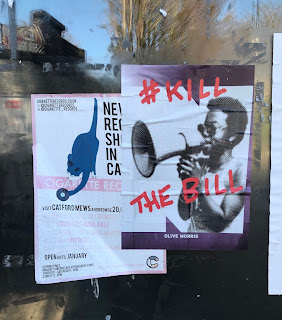 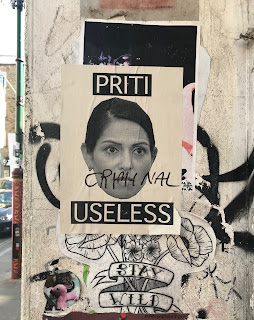 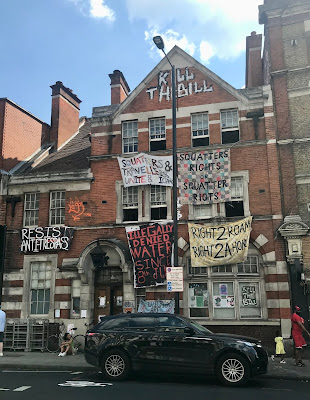 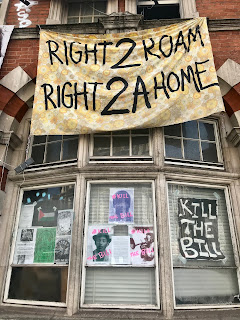 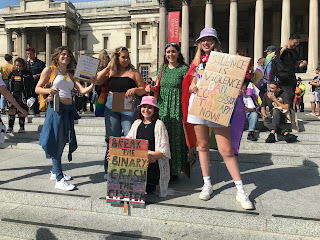 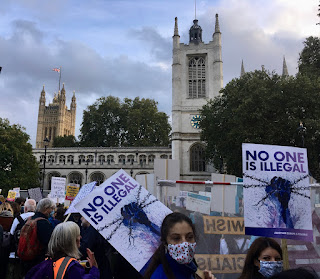 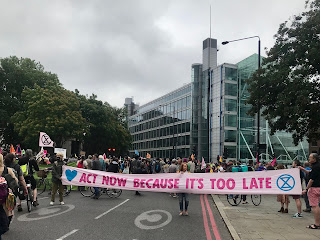 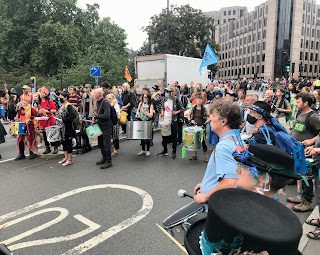 April 2022 - Extinction Rebellion week of action including here on 16 April a march from Hyde Park up Edgware Road. 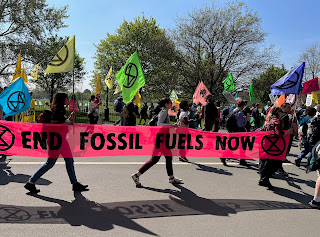