Love is the Message Podcast

I was pretty excited to hear that Tim Lawrence  and Jeremy Gilbert have started a new podcast, Love is the Message. Tim is the great cultural historian of disco with his books on The Loft, Arthur Russell and early 1980s New York, while Jeremy co-hosts one of my favourite podcasts, ACFM on Novara Media which looks at the weird/pyschedelic left.

They describe the new podcast as follows:

'Love is the Message: Music, Dance & Counterculture is a new show from Tim Lawrence and Jeremy Gilbert, both of them authors, academics, DJs and dance party organisers. Tune in, Turn on and Get Down to in-depth discussion of the sonic, social and political legacies of radical movements from the 1960s to today. Starting with David Mancuso's NYC Loft parties, we’ll explore the countercultural sounds, scenes and ideas of the late 20th and early 21st centuries. ”There’s one big party going on all the time. Sometimes we get to tune into it.” The rest of the time there’s Love Is The Message' 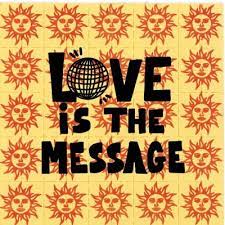 In the introductory episode they talk a lot about David Mancuso and his famous Loft parties which they see as a bridge between the counter-culture of the late 60s/early 70s and the emergence of disco not just as a music but as a  new way of being on the dancefloor. As Lawrence describes it in the show, when Mancuso moved to New York he was 'heavily committed to the ideas that were fermenting around civil rights, around gay liberation, around the feminist movement of course the anti war movement and he also got interested in experimenting with LSD... it was very much the idea that the party could become a manifestation of these energies. It had become dangerous to go out on the street, anti-war protestors were getting killed by the state for protesting against the Vietnam war. There was this idea that the dancefloor space, that intimate private space could also function as a safe space, as a refuge where these energies could be cultivated, could be nurtured, could be given freedom to explore themselves'.

Of course there had been 'discotheques' through the 1960s but these were primarily heterosexual courting spaces with short songs and regular breaks for slow dances and trips to the bar.  The focus was not on losing yourself in the music and the crowd. Lawrence describes The Loft as a an experiment where Mancuso used longer, percussive tracks as part of 'setting up the parameters,  exploring the outer limits of what happens when you take the dancefloor,  you turn it into a space of openness, of possibility, of exploration, of transformation, where there are no clear cut limits being set... using the neutral space of the floor as a space where the rules were taken away and people were  allowed to enter it and redefine the set of the rules. The grand experiment was what happens when you start to bring a different form of music into this setting and you let the music take you somewhere, you let it drive the space'.

Lawrence and Gilbert are not just theoreticians of this sort of stuff but actually put on parties with Mancuso before his death in 2016, so expect to hear a lot more about this in future episodes.