Our first dancing questionnaire from Poland:

1. Can you remember your first experience of dancing?
I was probably 6 and had rhythmic lessons in kindergarten I went to. I was told (or my mother was) that I had no sense of rhythm and cannot attend the lessons. Actually I didn't enjoy them because I was a very very very calm (and even sad) child. The second one is when I was on a wedding of my parents' friends and I was dancing with a girl my age (I was 7 or 8) to a Polish wedding music - it's called disco polo (keyboard melodies and pre-programmed rhythms + cheap folk melodies and sentimental lyrics). The third time I was 10 - and I went to a summer camp and I was dancing to stuff like Ace Of Base, Guns'n'Roses, Metallica (slow dance to "Nothing Else Matters") - basically early 90's eurodance and rock stuff popular in Poland.

2.What’s the most interesting/significant thing that has happened to you while out dancing?
Nothing at all, just pure physical joy. Recently I noticed I'm a better dancer and am more open to sounds when completely sober than after 5 or 6 beers, however I have a feeling of absolute joy and fulfillment while being on booze and hearing Fleetwood Mac "Everywhere". I just can't help it ;) . I never did any drugs to dance.

3. You. Dancing. The best of times…
Many times. Moshing to Polish pop-punk bands in the age of 15. Joe Strummer tribute nights after he died in 2002 and dancing like mad to all rockabilly stuff put between Clash songs Moshing like mad to Pixies in 2004 in Berlin. Indie-pop parties in Warszawa few years ago. Hearing Fleetwood Mac "Everywhere". Hearing MIA "Jimmy". Hearing "You Spin Me Like A Record" and "Last Night The DJ Saved My Life". House party in a club in Prague from about 7 to 10 in the morning after a night of wandering through the city (my friends took xtc I was just on alcohol) .

4. You. Dancing. The worst of times…
Anytime when you act as if you are having a good time and for whatever reason you keep pretending

5. Can you give a quick tour of the different dancing scenes/times/places you’ve frequented?
1990's - eurodance, Spice Girls, Babylon Zoo, Scatman John, Chumbawamba, George Michael, Michael Jackson - this is what we were dancing to in our school parties.

1999-2002 - rock and punk, mainly live music in Warszawa, not caring about danceability of the music I listen to and bands that I watch

2004-2009 - internet era: indie gone electro gone BLOG HOUSE gone dubstep, bassline and even hiphop or ironic eurodance etc. (everything melted together), started going to clubs in 2004 when I began earning money, before I didn't go to clubs on weekends; sometimes I choose more strict styles - go for a techno show, when the guy like Redshape from Berlin comes but usually local DJs blending many styles

6. When and where did you last dance?
Last Saturday in an awful (from musical point of view) place called Klubokawiarnia in Warszawa - they play very bad housed-up versions of biggest dance hits like Blue Monday or rhytmically numb housed up r'n'b (you have 4x4 + r'n'b vocals), and all djs play almost the same set and cannot really mix well. Awful place, but my friend from London came and she chose this club. 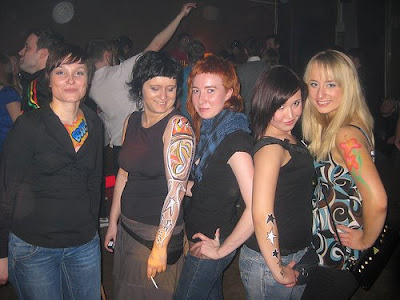 Picture of clubbers at Klubokawiarnia by Twisted Karolina at Flickr

7. You’re on your death bed. What piece of music would make your leap up for one final dance?
Probably I could pick something more energetic, but "One For The Heads Who Remember" by Skream seems appropriate.

All questionnaires welcome - just answer the same questions in as much detail as you like and send to transpontine@btinternet.com (see previous questionnaires)
Posted by Transpontine at 9:46 pm