The noise of history

'All around me there was an incredible rushing noise, which I knew was composed of shouting and screaming and firecrackers and stamping hoofs, but sounded to me like a great wind, like history'
(Hari Kunzru, My Revolutions, 2007)

Kunzru's quote is from his novel of late 60s/early 70s radical politics, in which the narrator describes taking part in the anti-Vietnam War demonstration by the US Embassy in London's Grosvenor Square. But that exhilarating noise of history, the sound of the crowd in motion, has been heard in many times and places.

Henry Cow's 'Nine funerals of the Citizen King' is a track on their 1973 debut album 'Legend' and signalled the radical critique which they carried forward until breaking up five years later. The lyrics reference Lewis Carroll ('the Snark was a Boojum' from his poem 'The Hunting of the Snark'), Gertrude Stein ('a rose is a rose is a rose') and Shakespeare ('O, gentlemen, the time of life is short!...An if we live, we live to tread on kings', Henry IV, Part 1).

The latter was also quoted in Guy Debord's 'The Society of the Spectacle' (1967), and as the song refers to the 'spectacle of free' I wonder whether Henry Cow had been reading Debord. If so they were ahead of their time - the first English translation of 'The Society of the Spectacle' was made by Black & Red (Detroit) in 1970, but it was certainly not widely known. The line 'we'll work to live to buy the things we multiply, until they fill the ordered universe' could have come straight out of Debord, or even an Angry Brigade communique from the same period.

Nine funerals of the Citizen King

Down beneath the spectacle of free
No one ever let you see
The Citizen King
Ruling the fantastic architecture of the burning cities
Where we buy and sell...

If we live, we live to tread on dead kings
Or else we'll work to live to buy the things we multiply
Until they fill the ordered universe

Once upon a time my punky self would have dismissed this as 'prog'. But I was so much older then, I'm younger than that now.

Oh and they played a benefit for Brixton Socialist Club in 1978.

1984 Chronicle of a Year Foretold: February

A chronology of events in the UK

Wed 1 February – print unions and News International agree deal to resume printing of The Times; Sogat 82 calls off blacking of Radio Times on day BBC takes them to court – union members had refused to distribute Radio Times as part of a dispute with Maxwell’s British Printing and Communications Corporation over redundances – as  a result BBC switched printing to Hunter Print in the North East, but the boycott continued (GH 2/2)

2 February: Gilbert & Page factory at Colney Heath, Hertfordshire, which makes snares and pens, set on fire by animal liberationists (I.2)

Monday 6 February: police visit offices of Friends of the Earth investigating the leak of a Government document about nuclear dumping at sea (GH 7 Feb)

Monday 6 February: Government announces reduction in scale of planned cuts in housing benefit ‘to head of a rebellion on his own back benches’ but remains criticised by pensioners and child poverty organisations (GH 7 Feb)

Monday 6 February: ‘9 people arrested outside London High Court during Animal Liberation Front protest at delay of appeal sentence for Steve Boulding jailed for 15 months last June, for conspiracy to cause damage at lab using animals in experiments’ (I.2)

Wed. 8 February: court orders workers to end occupation of the Sovereign Explorer oil rig in the Firth of Clyde off Largs. The rig was built at Cammell Laird in Birkenhead, but was damaged in gales during sea test. The CL workers  wanted it to be brought back there for repairs, but the company insisted it be taken to a yard in France (GH 9 Feb)

Thurs. 9 February One day walk out at Scott Lithgow shipyard in response to threatened takeover and loss of 2000 jobs

Thurs 9 February: police seize documents from investigative journalist Duncan Campbell and search his house after he is involved in a bike accident (GH 16 Feb)

Monday 13 February: NUM meeting for delegates from Scottish pits in Edinburgh decides to postpone for a week decision about whether to stage indefinite strike against closure of Polmaise and Bogside colliery, pending a series of pithead meetings. 100 Polmaise miners lobbied the meeting for an all out strike, and some angrily shouted ‘sell out’ at the NUM Scottish leaders (GH 14 Feb)

Monday 13 February: life models at Glasgow and Edinburgh art colleges refuse to pose nude in campaign for better pay and conditions. At the latter, ‘Classes went ahead, and students produced drawings of the clothed models’ (GH 14 Feb)

Monday 13 February: 2500 railway workers stage a 24 hour strike, causing cancellation of at least 75% of trains in Strathclyde area. The unofficial strike organised by the Strathclyde NUR action committee was against plans for driver only trains and automated stations. It was criticised by the NUR leadership as well as management. In a separate dispute, 4000 bus workers went on strike for two hours in protest against planned closure of three bus garages in Glasgow (GH 14 Feb 84)

Tuesday 14 February: a man accused of being a police informer is found shot dead by the IRA near Crossmaglen (GH 15 Feb)

15 February: miners walk out at Seafield colliery in Fife in dispute relating to disciplining of miner; strike at Killoch in Ayrshire in response to management action over overtime ban (GH 16 Feb)

17 Feb: employment secretary Tom King hit by an egg during a protest by Cammell Laird shipyard workers on a visit ot Birkenhead in Merseyside (GH 18 Feb)


Mon. 20 February: strike by miners in Doncaster area following merger of Goldthorpe and Highgate collieries (workers from two pits were not paidbeing the same). Miners also walk out at Manvers Collliery in South Yorkshire in dispute over meal breaks, supported by strikes at six other local pits over the next week.

Mon. 20 February: 16 arrests in clashes between hunt saboteurs and police at harecoursing meeting in Altcar, Lancashire (I.2)

Mon 20 February: NUM delegates meeting in Edinburgh votes against strike against closure of Polmaise, despite support fro strike by NUM president Mick McGahey (GH 21 Feb) . By this time rumours of hit list of pit closures were rife, but Scottish miners were reluctant to strike on their own.

Tues. 21 February: two members of the IRA and  British Army soldier killed in a gun battle between an undercover BA unit and the IRA at Dunloy, County Antrim.

Wed 22 February: NCB chairman Ian MacGregor knocked to the ground after fence gives away during a  protest by  miners and his car tyres let down in a visit to Ellington colliery in Northumberland (GH  23 Feb)

Thursday 23 Feb: two Greenham women say they are shot at after cutting through fence. An American patrol fired two shots after the women refused to lie face down. They are arrested but unhurt (GH 28 Feb). Government denied shots were fired.

Friday 24 Feb: Thatcher's car is hit by an egg during a demonstration by 500 students as she visits Warwick University. A Conservative students meeting with Cecil Parkinson (Trade & Industry Secretary) at Essex University after 'students threw missiles at him and blocked his way' (GH 25 Feb)

Friday 24 Feb: Police and troops saturate the funeral of IRA volunteer Henry Hogan in Dunloy, shot dead earlier in the week. There are scuffles as police block the mourners path - supposedly to prevent IRA firing shots over the coffin (GH 25 Feb).

Tuesday 28 Feb: TUC day of action in support of GCHQ workers - walk outs (mostly half day strikes)  at hospitals, DHSS offices, the Yarrow warship yard, newspapers (leading to halting of all Fleet Street papers), North Sea oil rig at Methil, car factories,. 40,000 march in London from the Embankment to Jubilee Gardens.(GH 29 Feb). GCHQ workers had been given to the end of February to renounce union membership in return for one off £1000 payment - most did. 40 asked to be transferred to other Government departments

Wednesday 29 February: seven Americans begin a world peace walk with a vigil at the Holy Lock US nuclear submarine base, followed by a torchlit procession with supporters to Greenock. They aim to walk to Moscow to arrive on Hiroshima Day (GH 1 March)

Meanwhile back in the UK pop charts, these were the top twenty singles in February 1984:

Some pictures from Athens last weekend:

Some street art from the Exarchia area: 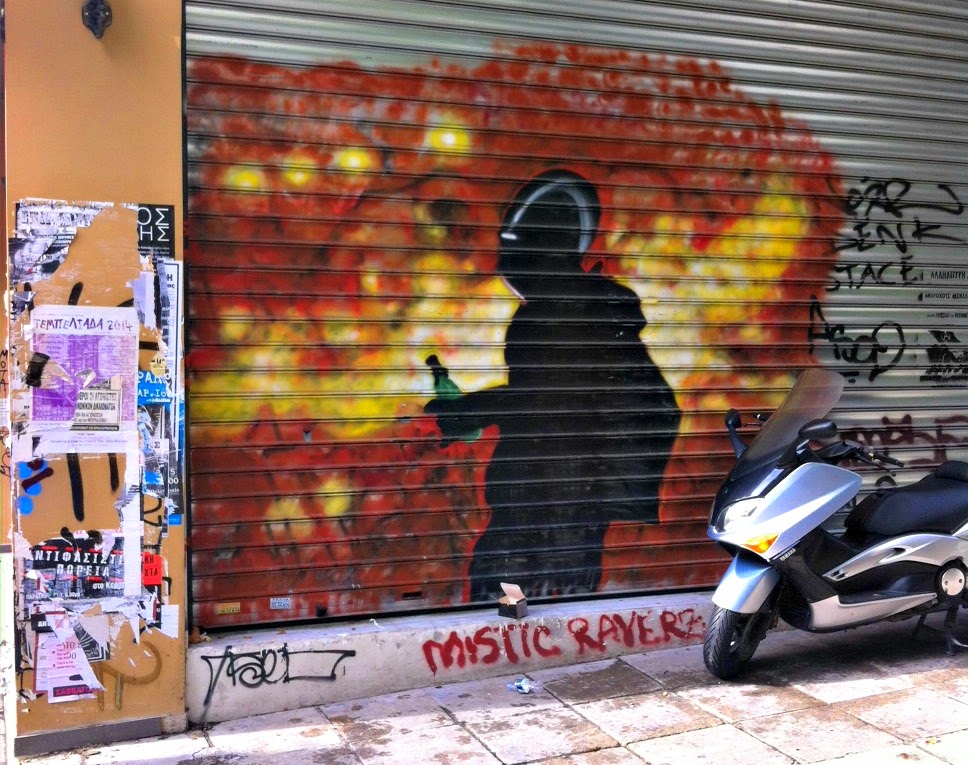 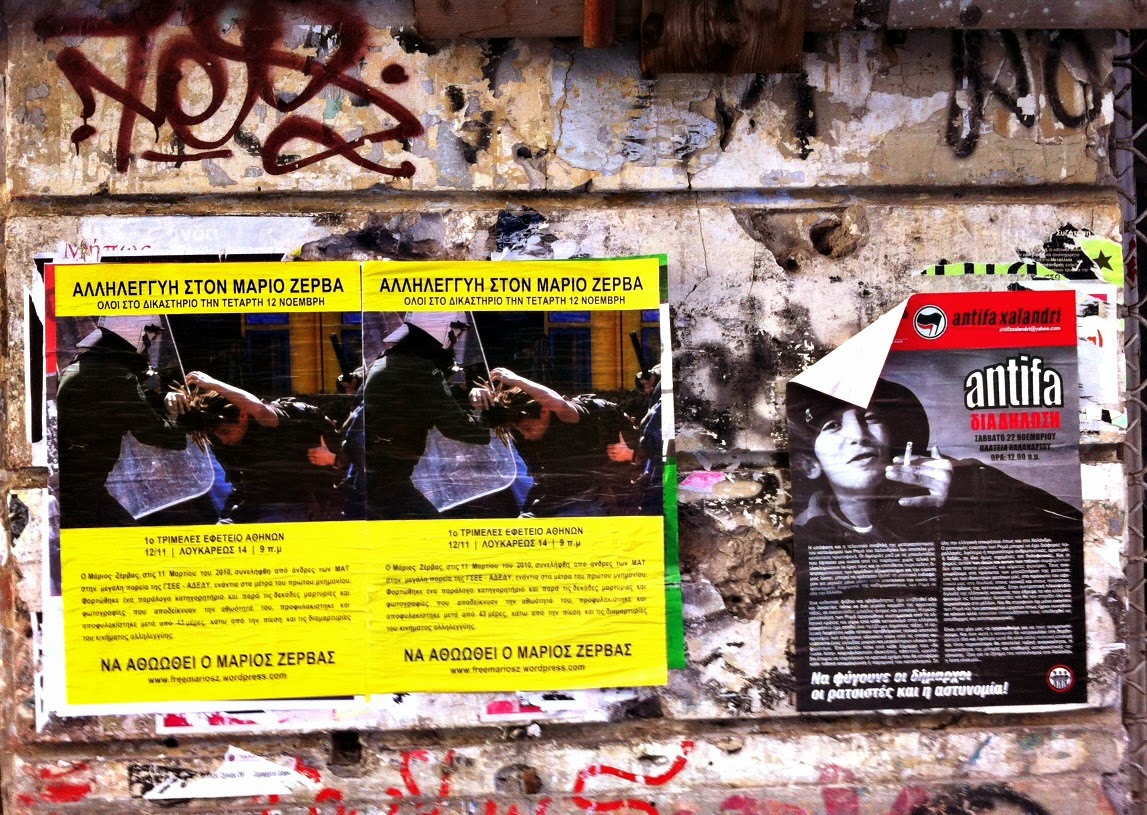 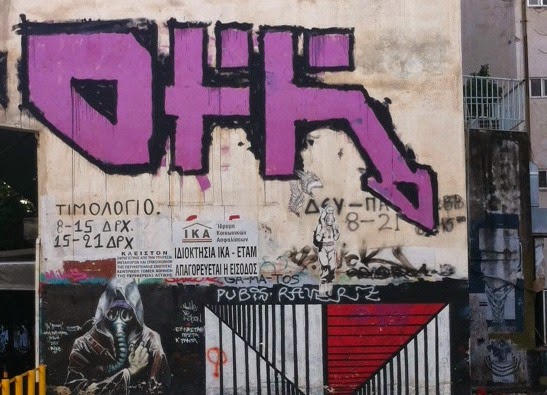 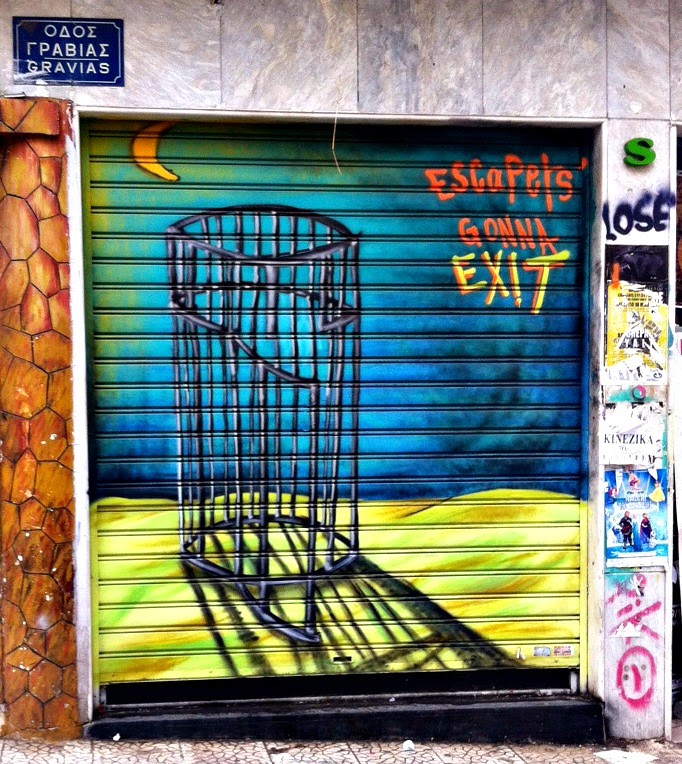 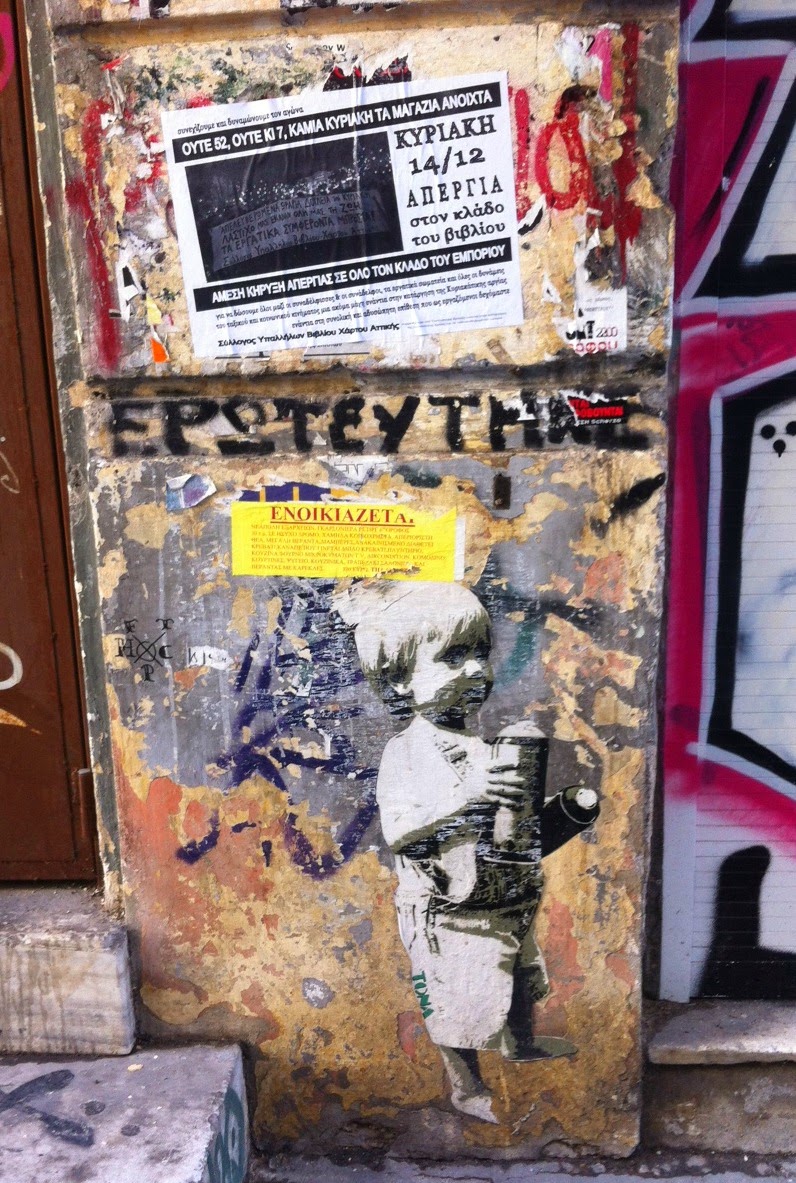 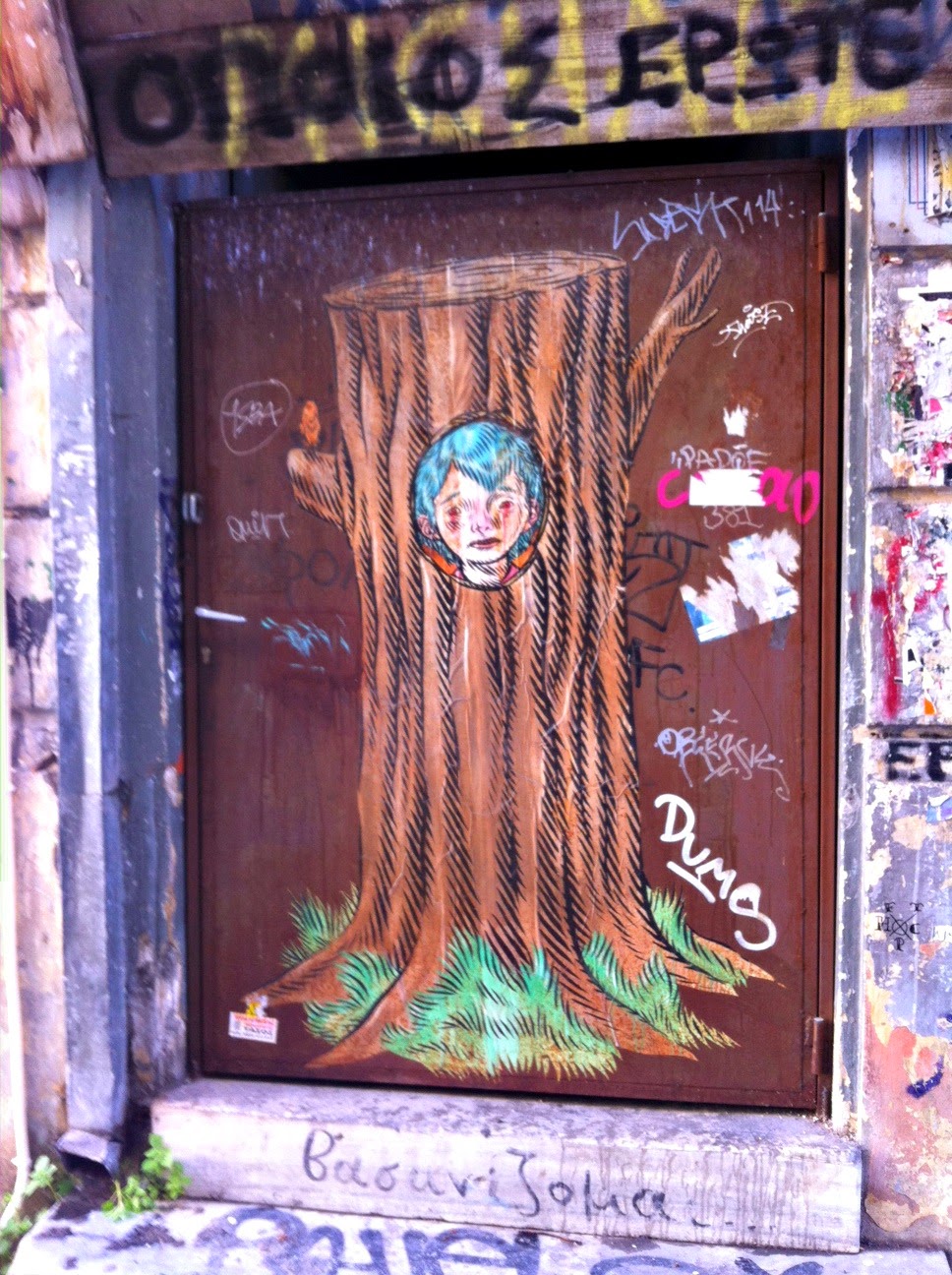