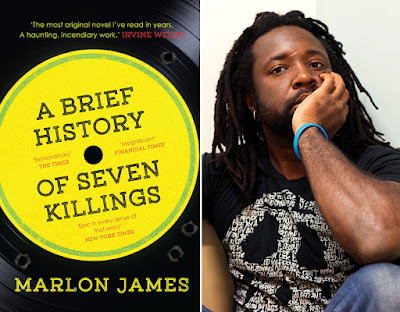 Reading Marlon James' brilliant 'A Brief History of Seven Killings' has led me into a re-appreciation of Bob Marley. Of course everybody loves Marley, but the very ubiquity of his image, from cans of drinks to posters on student stoners' bedroom walls, is part of the problem. Like The Beatles or The Clash it's hard to simply listen to the songs buried under decades of nostalgia and music industry marketing.

While reading the novel I went back and listened properly to Marley's output for the first time in years, starting with his early material. And yes a lot of it still sounds great! Reading about the political and social conditions of 1970s Jamaica in the novel, you can certainly understand the incendiary impact of songs like 'Them Belly Full (But We Hungry)' or 'Talkin' Blues' ('who's gonna stay at home when the freedom fighters are fighting?').

In some ways the novel is only tangentially about Marley, referred to as The Singer throughout. He rarely appears himself as a character, but he is a central focus for many of the other characters whose lives are shaped by their involvement, in various ways, in the shooting of Marley in December 1976. For James this incident is just a moment, albeit a key one, in a bigger geopolitical story that includes the Cold War and its impact on the political situation in Jamaica, polarised between two main parties and their related armed gangs, and subsequently the transformation of local gangsters into major players in the international drugs trade. All this and a lot more than seven killings.

But at one point James does reflect briefly on the wider significance of Marley as a global talisman for 'sufferahs' everywhere:

'Three girls from Kashmir sling on bass, guitar and drums, fresh faces brimming out of burkas, propped up and held together by a backdrop of the Singer streaked in red, green and gold stripes, thick like a pillars. They call themselves First Ray of Light, soul sisters to the Singer smiling with his rising sun. Out of a wrapped face comes a melody so fragile it almost vanishes in the air. But it lands on a drum that kicks the groove back up to where the song lingers, swells and soothes. Now the Singer is a balm to spread over broken countries. Soon, the men who kills girls issue a holy order and boys all over the valley vow to clean their guns, and stiffen their cocks, to hold down and take away. The Singer is support, but he cannot shield, and the band breaks away.

But in another city, another valley, another ghetto, another slum, another favela, another township, another intifada, another war, another birth, somebody is singing Redemption Song, as if the Singer wrote it for no other reason but for this sufferah to sing, shout, whisper, weep, bawl, and scream right here, right now'.

The 'Three girls from Kashmir' referred to here are the band Pragaash (whose name translates as first ray of light), who appeared briefly in December 2012 but gave up a few months later after the Grand Mufti in Kashmir issued a fatwa terming singing as un-Islamic and the band received online threats.