Rock Against Racism was a significant cultural force in Britain during the late 1970s, mobilising some of the best punk, post-punk and reggae bands of the periods to perform and publically condemn the far right National Front (predecessors of today's British National Party).

Here's a few RAR internal documents from 1979 (click to enlarge). First up is the RAR constitution: 'RAR is rockers against racism and the shit conditions that create it. We are against the National Front, the British Movement, all racist politicians and racists everywhere. We are for multi-racial roots unity, forward sounds and militant gigs. We are politically and financially self-supporting but we gig with anyone who shares our aims… Although we are called ‘Rock Against Racism’ we support the struggle against other forms of oppression. There is no way we will allow women, gays or Irish people to be put down or made the butt of dumb jokes from a RAR stage. While RAR is a deadly serious political message, we are also a bunch of loonies dedicated to keeping Britain Dayglo’. 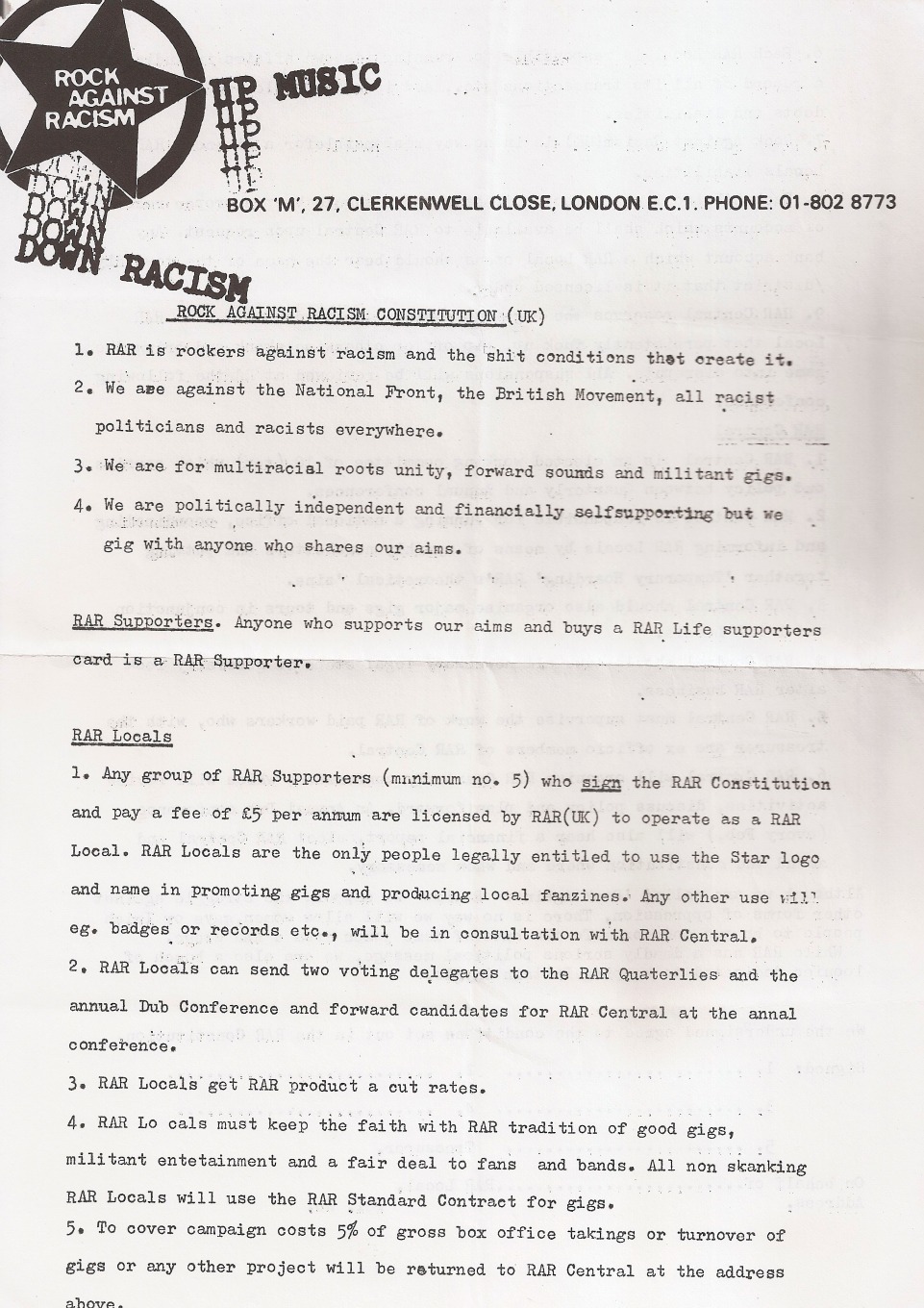 Organisation was based around ‘RAR Locals’ sending delegates to an annual Dub Conference, as well as RAR Quarterlies. National co-ordination was by an elected ten person 'RAR Central'. Obviously one risk was that local groups using the RAR brand would not adhere to the values of the movment - the consitution stipulates that 'RAR Locals must keep the faith with RAR tradition of good gigs, militant entertainment and a fair deal to fans'. 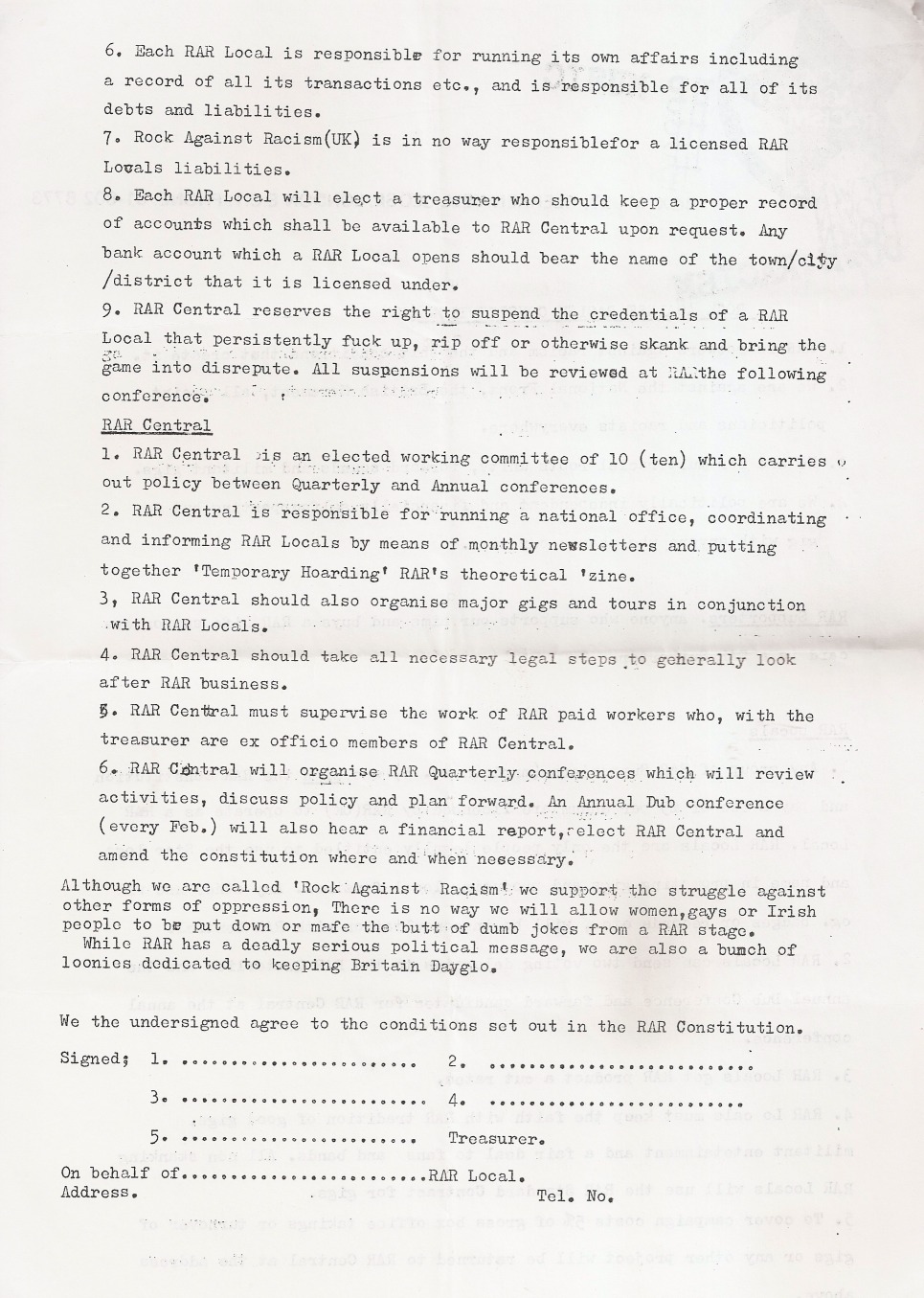 This November 1979 internal newsletter includes a report of a quarterly ‘RAR remix’ conference held in London, with 50 delegates.

It gives an idea of some of the practical concerns, such as dealing with Councils and commercial agents for bands when putting on gigs. RAR developed a Standard gig contract to deal with this that ‘protects you against being ripped off and will give bands confidence in your organisational abilitiies’.

In 1979, the Dance and Defend tour had included 20+ gigs ‘as a response to the police riots in Southall, West Brom and Leicester’ (all involved clashes with police on anti-National Front protests). The biggest event was ‘Southall Kids are Innocent’ at the Rainbow in London, two nights featuring The Pop Group, Misty, The Ruts, Pete Townsend, Aswad, The Enchanters, The Members and The Clash. 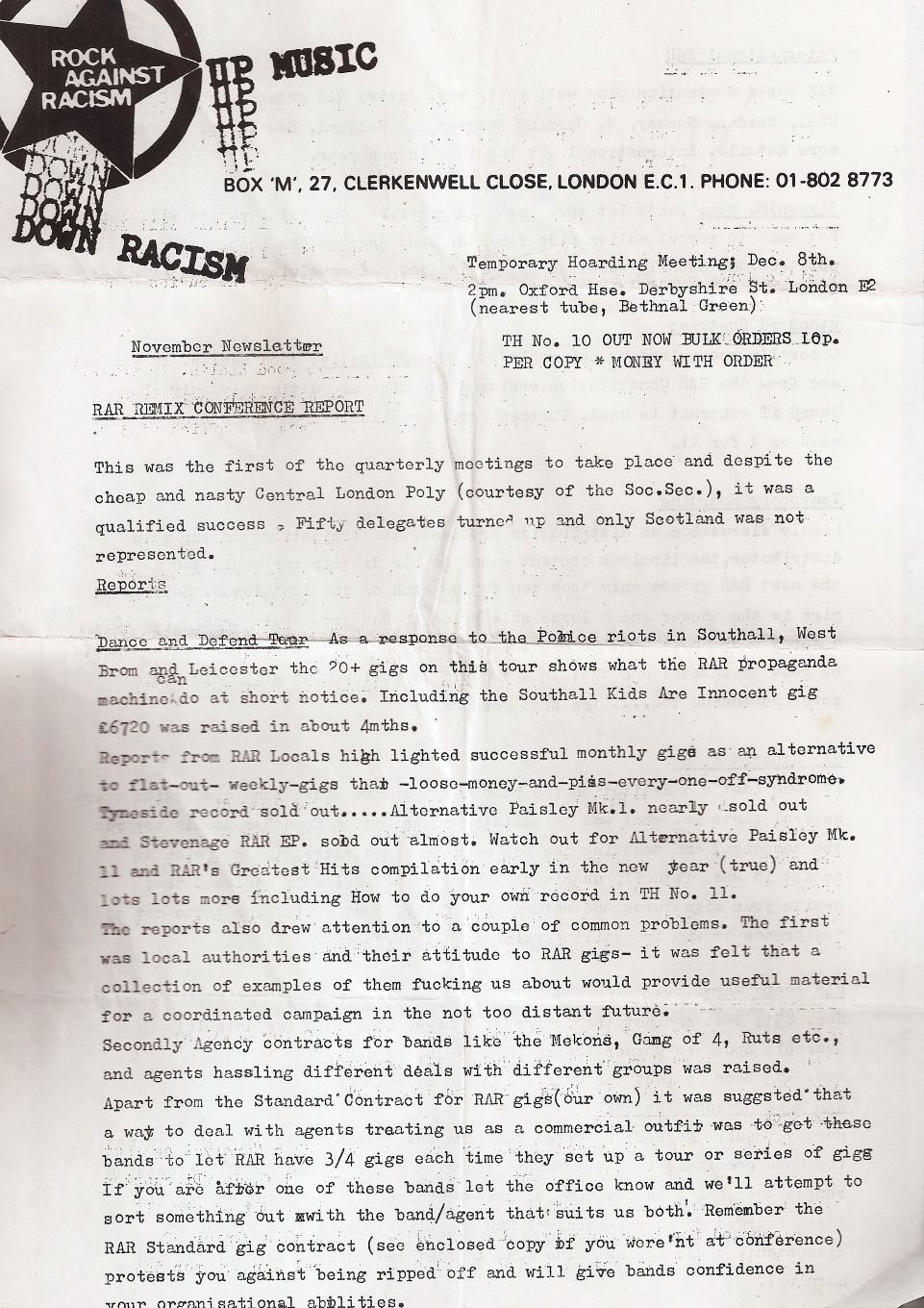 Some RAR Locals had put out records as well as putting on gigs ‘Tyneside record sold out… Alternative Paisley Mk. 1 nearly sold out and Stevenage RAR EP sold out almost’. Groups were also being formed in other countries ‘Active RAR groups across Canada, USA, Sweden, Norway, West Germany, Belgium and Holland’ . 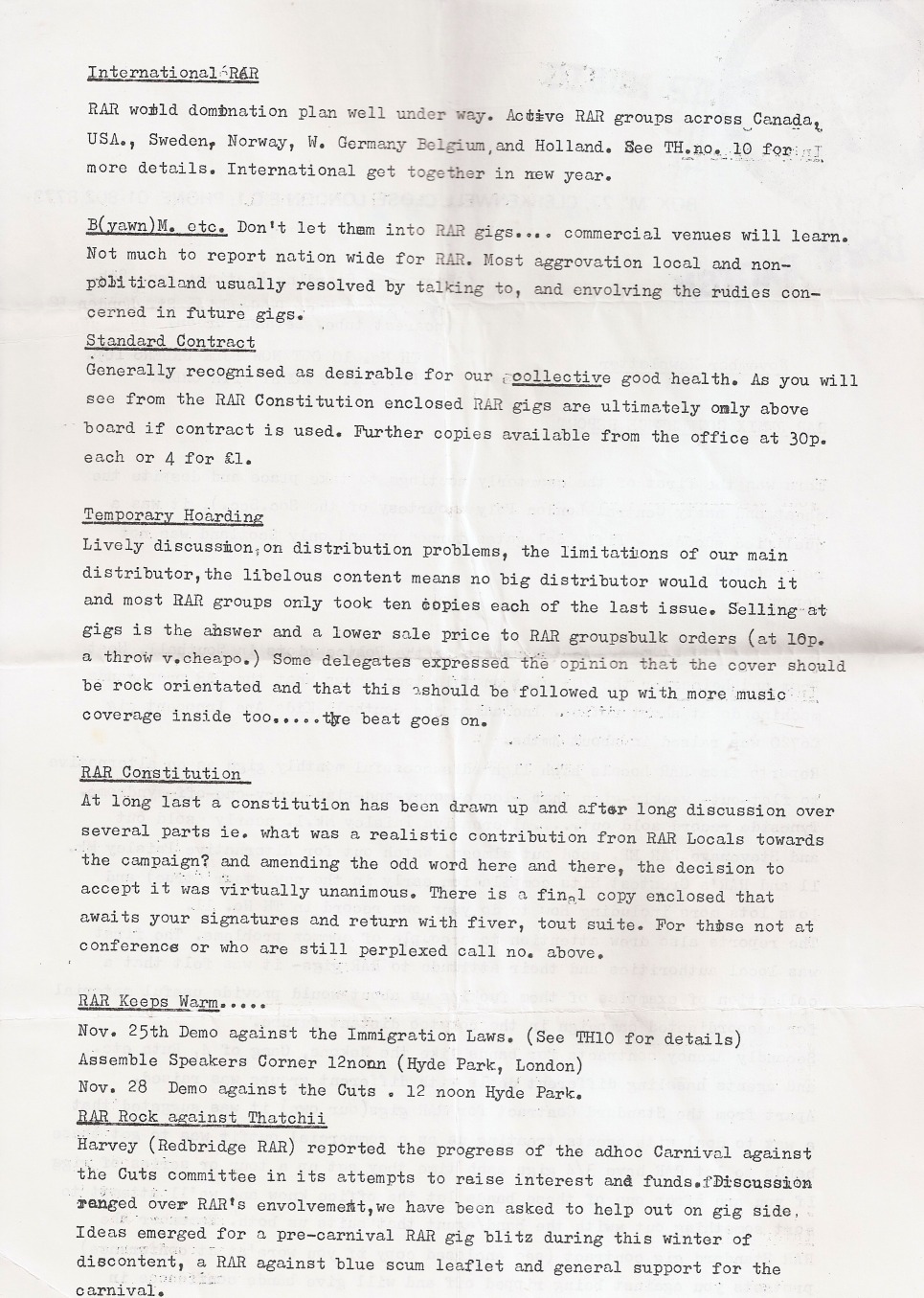 RAR Central put people in touch with each other who wanted to start a local group. When I was at school in Luton in this period I wrote off to RAR for information, and got this letter back: 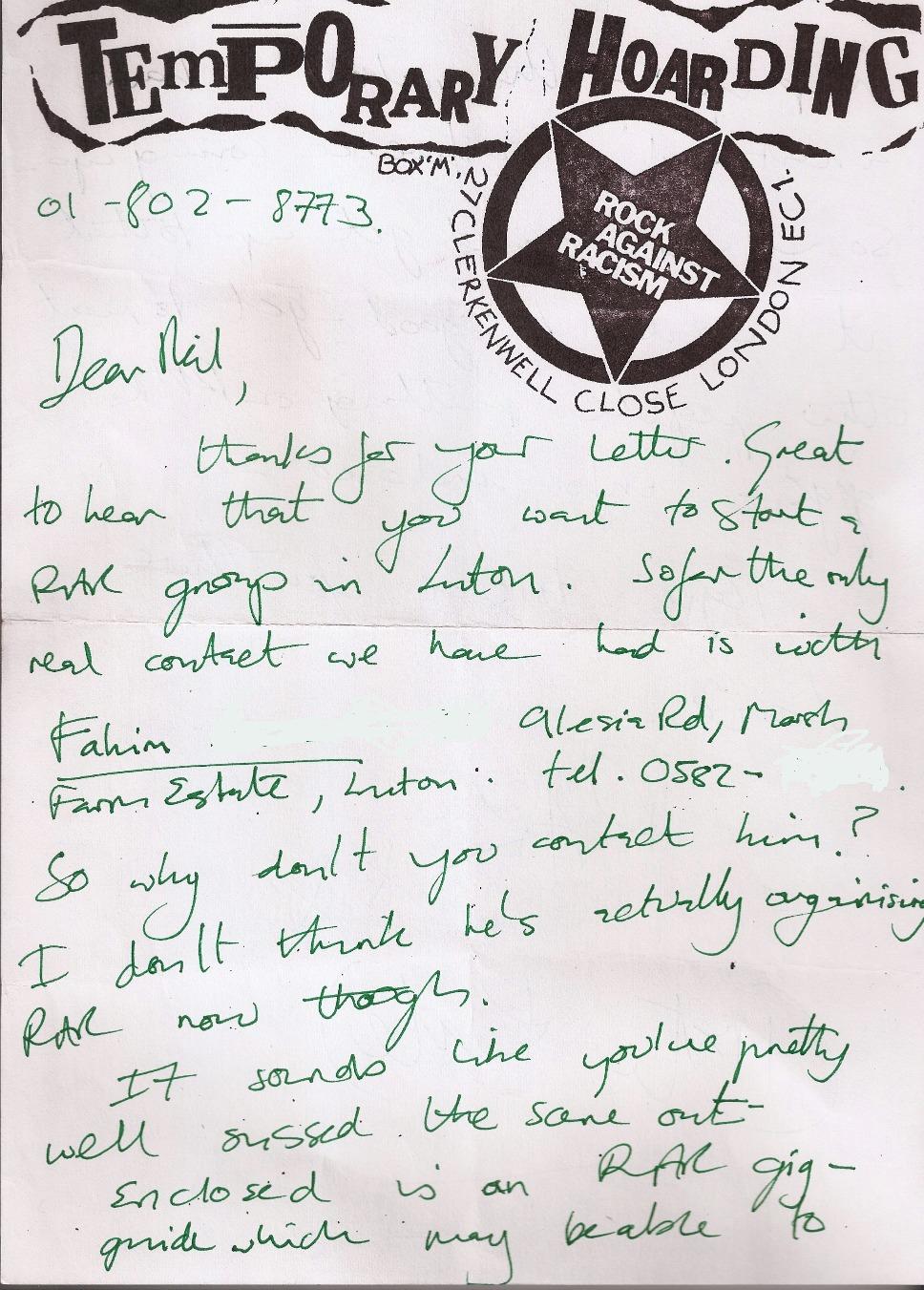 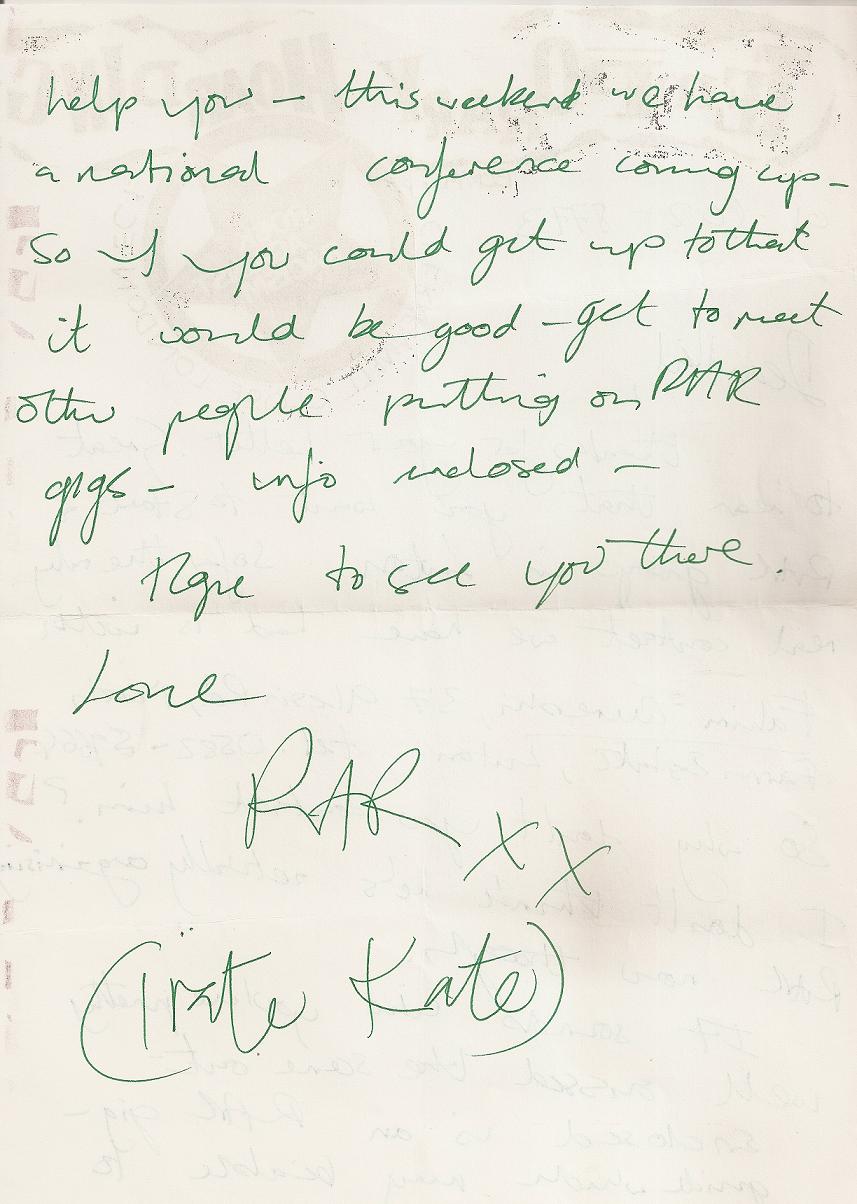 I knew absolutely nothing about putting on gigs and didn't get any further with Luton RAR. But I did start to get involved with going on anti-NF protests, which was the start of a great adventure...

The letter was signed Irate Kate, who I now know to have been Kate Webb: 'In 1977 I dropped out of college and started working for Rock Against Racism. I was seventeen and called myself (I wince at the thought) Irate Kate. I began as a volunteer but soon became RAR’s first paid worker and the youngest member of its national executive... I left RAR in 1981 as the central collective was tearing itself apart over differences about the way we should proceed (an argument, as I recall, between becoming more corporate and professional, or returning to the grass roots and staying outside the mainstream – and inflamed as these things often are by personal animosities). I had organised a benefit with UB40 at the local fleapit in Brixton; sensing RAR had run its course, and wanting to get into film, I went to work in this cinema, then known as The Little Bit Ritzy'.

Kate's brief account at her blog New Mills has links to some other RAR resources, but as she notes there's still a lot about that time that has never been properly documented.

Nothing Is Lost said...

Kate here - not Woods, but Webb. Just to let you know there's a panel tomorrow at the British Library to discuss RAR with myself, Lucy Toothpaste, Tom Robinson and Denis Bovell. We'll be discussing Daniel Rachel's new Picador book, Walls Come Tumbling Down: the music and politics of Rock Against Racism, 2 Tone and Red Wedge. If you can make it, come up and say hello.