This interview with Linton Kwesi Johnson was published in the newspaper Socialist Challenge (29 April 1982) under the headline 'We're di forces of vict'ry', alongside a couple of his poems. 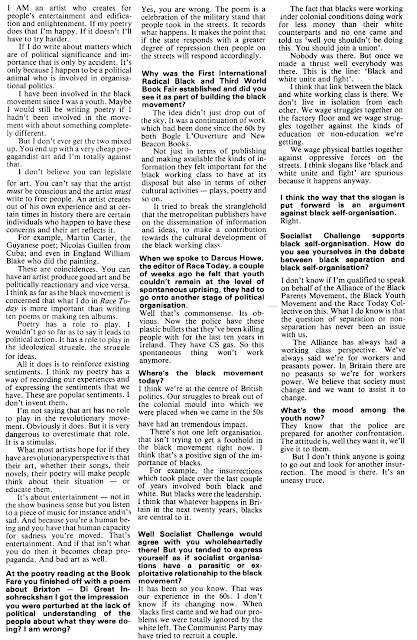 'I am an artist who creates for people's entertainment and edification and enlightenment. If my poetry does that I'm happy. If it doesn't I'll have to try harder. If I do write about matters which are of political significance and importance that is only by accident. It's only because I happen to be a political animal who is involved in organisatonal politics.
I have been involved in the black movement since I was a youth. Maybe I would still be writing poetry if I hadn't been involved in the movement with about something completely different. But I don't ever get the two mixed up. You end up with a very cheap progagandist art and I'm totally against that.
I don't believe you can legislate for art. You can't say that the artist must be conscious and the artist must write to free people. An artist creates out of his own experience and at certain times in history there are certain individuals who happen to have these concerns and their art reflects it. For example, Martin Carter, the Guyanese poet; Nicolas Guillen from Cuba; and even in England William Blake who did the painting. These are coincidences. You can have an artist produce good art and be politically reactionary and vice versa.
I think as far as the black movement is concerned that what I do in Race Today is more important than writing ten poems or making ten albums.
Poetry has a role to play. I wouldn't go so far as to say it leads to political action. It has a role to play in the ideological struggle, the struggle for ideas. All it does is to reinforce existing sentiments. I think my poetry has a way of recording our experiences and of expressing the sentiments that we have. These are popular sentiments. I don't invent them. I'm not saying that art has no role to play in the revolutionary movement. Obviously it does. But it is very dangerous to overestimate that role. It is a stimulus.
What most artists hope for if they have a revolutionary perspective is that their art, whether their songs, their novels, their poetry will make people think about their situation or educate them.
It's about entertainment - not in the show business sense but you listen to a piece of music for instance and it'ssad. And because you're a human being and you have that human capacity for sadness you're moved. That's entertainment. And if that isn't what you do then it becomes cheap propaganda. And bad art as well'.
The paper also includes an advert for a '3 the hard way - an evening of poetry with Dub Poets' at Lambeth Town Hall in Brixton with LKJ, Oku Onouua and Michael Smith. The latter was to be killed in the following year in Jamaica after heckling a government minister of the then ruling right wing Jamaican Labour Party. 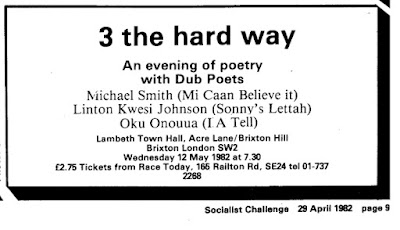 (Socialist Challenge was the newspaper of the International Marxist Group)
Posted by Transpontine at 4/25/2022 08:07:00 am No comments:

Images of musicking and dancing feature heavily in the exhibition 'Life Between Islands: Caribbean-British Art' at Tate Britain. 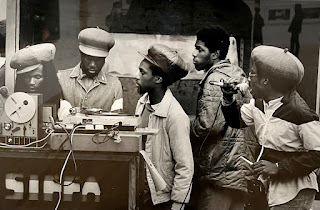 'The various musical styles created in widely defined Black Atlantic history have proved so influential that we are obliged to consider the consistency with which they have summoned the possibility of better worlds, directing precious images of an alternative order against the existing miseries, raciological terrors and routine wrongs of capitalist exploitation, racial immiseration and colonial injustice. Those gestures of dissent and opposition were voiced in distinctive keys and modes. They carried the cruel imprint of slavery and were influenced by the burden of its negation.

However, that is not the most important observation we can make about them. The transcoding and transcendence of suffering made productive, becoming useful, but never, in spite of what Bob Marley had said, seeking redemption, directs our attention towards more elusive possibilities. Energised by political and social movements, those musical formations were anticipatory. They helped to construct and enact a 'not-yet' and enchanted it so that it could be both pleasing and seductive. It could be intoxicating and it could be enhanced the ingestion of intoxicants.
Here we encounter the possibility that, under optimal conditions, singers, dancers and audiences, DJs and selectors might be able to collaborate so that they could glimpse the edge of their world, grasp the fragility of the order they inhabited and apprehend the fleeting but fundamental possibility of Babylon's overthrow'
(from Paul Gilroy, 'Colour Bars and Bass Cultures, Dub Aesthetics and Cockney Translations: Music in the Creole History of Black Life in Britain' in 'Life Between Islands' (Tate 2021)
The exhibition closes on 3 April 2022
Posted by Transpontine at 4/02/2022 08:36:00 pm No comments: