It's the start of a new term in British student life, and yes no doubt at the end of Freshers Week some students are going out dancing, having a lot to drink and maybe something a little stronger.

But at the Royal Holloway Students Union in Surrey the local police obviously thought this was a big crime fighting priority. According to Workers Liberty:

'On the night of Friday 27 September, at least fifteen police officers were present at Royal Holloway Students’ Union in Surrey, engaging in the profiling and searching of students attending a freshers’ week social. This included both uniformed cops with tasers and sniffer dogs and, even more bizarrely, undercover police disguised as students. The police had been invited into the student union by a commercial manager; no student or elected student representative authorised their presence or was consulted. The police were particularly targeting black students: an all-too common reminder of the police's systematic racism. When a group of students attempted to challenge the police action, one of them – former Royal Holloway SU President and current University of London Union Vice President, Workers’ Liberty member Daniel Cooper – was manhandled to the ground by seven officers and arrested. He was held until Saturday afternoon'.

Demonstrations are continuing all over Greece following the murder of Pavlos Fyssas by fascists this week. An anti-fascist lost an eye on Wednesday after being hit by a police tear gas cannister, and numerous anti-fascists have been injured and/or arrested. Check Occupied London for latest updates.

A demo has been called in London at the Greek Embassy tomorrow (Saturday 21 September), 1 pm at 1a Holland Park, W11 (facebook event details here).

'On the night of September 17th, a 34-year-old man died in the early hours of Wednesday morning after he was attacked by a neonazi (member of Golden Dawn) and subsequently stabbed in Piraeus. The victim has been named as Pavlos Fyssas (who went by the stage name of Killah P.), a hip-hopper involved in the antifascist scene, organising anti-racist concerts and other social activities in the area where he lived. He was stabbed in the chest outside a café at 60 Panayi Tsaldari Avenue in Amfiali, in the Keratsini district of Piraeus, shortly after midnight by a group of neonazis dressed in black and camouflage uniforms. The name of the 45-year murderer of Fyssas appears to be Giorgos Roupakias.

More specifically, Pavlos’ friends made a remark against Golden Dawn inside a cafe where they were watching a football match. Somebody from a nearby table overheard them and made a phonecall to Golden Dawn members. Golden Dawn squads arrived almost simultaneously with DIAS motorbike police. Pavlos tried to help his friends evade the scene, but he was ambushed by another Golden Dawn squad and surrounded. Then another Golden Dawn associate drove with his car opposite in an one-way street, stopped and stabbed him to death, while the DIAS policemen did not intervene. One girl asked them to help but they didn’t. They only approached afterwards to arrest the man with the main suspect. Pavlos was taken to Tzanio hospital, where he died shortly afterwards. Before he died, he managed to identify the perpetrator and his accomplices, according to reports'.

Mass arrest of anti-fascists opposing the EDL in Tower Hamlets

The English Defence League demonstration in London yesterday didn't amount to very much, with around 500 taking part. Fears that they would pick up momentum in the aftermath of the Woolwich killing of soldier Lee Rigby have not been borne out.

The EDL had intended to march on East London Mosque in Whitechapel claiming that Tower Hamlets is under sharia law - presumably just because it has a large Muslim population. The police kept them well away from there however.  After meeting in Southwark by the south end of Tower Bridge, they were escorted over the bridge to the edge of Tower Hamlets at Aldgate and back again. Later a few of them wandered through Bermondsey shouting slogans then dispersed.

A larger counter demonstration of several thousand people gathered in Altab Ali Park in Whitechapel where the EDL had originally planned to get to - a provocative gesture as the park is named after a local man killed in a racist attack in 1978. Speakers included Max Levitas, who fought against fascists in this part of London in the 1930s. 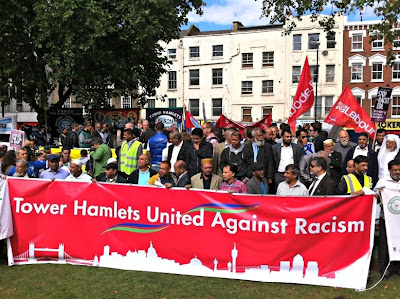 In an attempt to get nearer to the EDL, a large part of the crowd headed by an Anti-Fascist Network bloc set off round nearby streets. Some of them ended up being kettled by police, who later staged a mass arrest of anti-fascists under Section 12 and Section 14 of the Public Order Act 1986 - the laws which allow the police to impose conditions on public demonstrations and assemblies. In other words, they were arrested for diverging from the route imposed by the police - for little more than standing in the wrong road.

Final numbers have not yet been confirmed but it seems that in the region of 200 anti-fascists were arrested. Bail conditions have been imposed preventing those arrested from taking part in protests 'within the boundaries of the M25 where the English Defence League, English Volunteer Force or British National party are present'. This seems to be a deliberate police strategy to combat the resurgence of militant anti-fascism - South London Anti-Fascists and similar groups have shown that they can mobilise growing numbers of people at a time when the wheels seem to be coming off the SWP-led Unite Against Fascism. 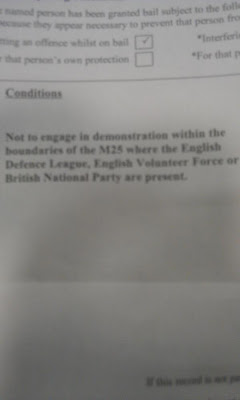 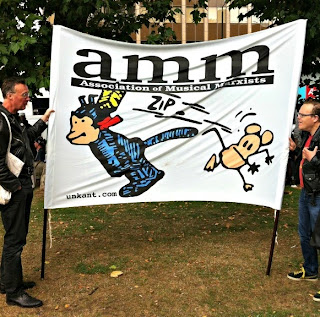 On a musical note, I noticed that the Association of Musical Marxists had a banner out yesterday.

And in the park there was a great performance by UK Apache. After a rendition of his famous 'Original Nuttah' ('Bad boys inna london, Rude boys inna england') he sang Tenor Saw's 'Lots of Sign' - fantastic.

Posted by Transpontine at 8:35 am No comments:

I caught the last day of Ellen Gallagher's AxME exhibition at Tate Modern on Sunday. Particularly taken with this Sun Ra homage: 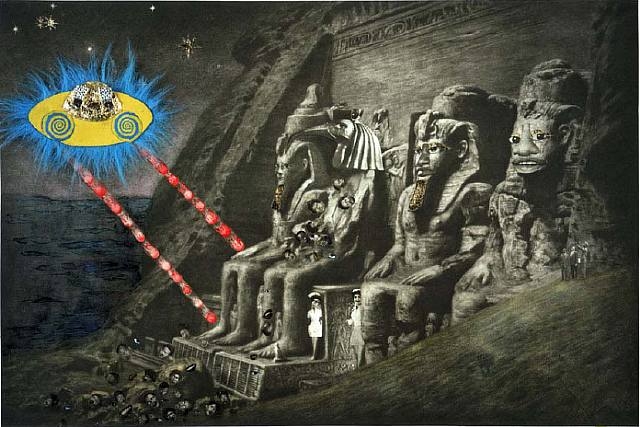 'Abu Simbel 2005 is based on a print that hung in Freud’s library, showing the Temple of Ramesses II. Reworking the faces of the Pharaoh’s statues and adding incongruous figures, Gallagher also brings in a cartoon-like spacecraft derived from Sun Ra’s film Space is the Place 1974. The evident humour of the piece belies its knowing references, setting black historiography that claims a cultural lineage stretching back to ancient Egypt alongside Sun Ra’s fantasy of discovering a new homeland in outer space' (Tate)
Posted by Transpontine at 8:46 pm No comments: