The fourth in a series of posts on the summer riots of 1981.

On Tuesday 7th July 1981, on the same night as the first stirrings of the uprisings reached Manchester, there was also trouble in north London's Wood Green area. The local MP (Reg Race) reported to the House of Commons the next day:

'There were a large number of disturbances in my constituency last night, and 35 shops in Wood Green High Road were looted or had their windows broken. Reports in the press and by various individuals claim that 26 policemen were injured and 50 civilians arrested. Crowds of 400 to 500 youths — black, white and of Mediterranean origin—roamed around Wood Green High Road. A serious situation developed'.

(The reference to Mediterranean origin seemingly arose from the participation of Cypriot youth). 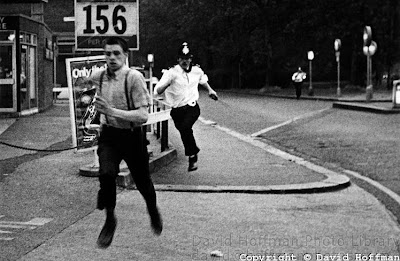 (photo from Wood Green © David Hoffman Photography, who has seemingly been photographing riots for 30 years)
The Times reported that in Wood Green 'the trouble began when a group of between 300 and 400 black youths began to gather near Turnpike Lane Underground station and marched along the High Road… The Special Patrol Group was called in. Police carrying riot shields attempted to drive the youths from the High Road. They had started fires in waste bins, and police cars were stoned…. In one men’s outfitters, a gang of black youths even took time to strip every window model of their trousers. Mr Mel Cooper, the owner commented: "They looted thousands of pounds worth of stuff, most of it trousers and shirts"' (Times, 8 July 1981).
Posted by Transpontine at 8:00 am

I was in the area that night and recall Dainton Connell Arsenal hooligan being amongst the mob at the top end of Wood Green. RIP

D was a Wood Green boy

If you look at the David Hoffman site you've provided a link to, you';; see that the photo you publish is in fact in Woodford Green and NOT Wood Green