Another in the series of posts on the 1981 summer uprisings. 30 years ago today, on Saturday 11 July, riots raged in Leicester, both in the city centre and in Highfields (the latter with its large Asian community). The following report comes from Socialist Worker, 18 July 1981:

'Last Friday the solicitor's office of Tony Reed-Herbert, the nazi gun-runner, was picketed by anti-racists. Highfields district of Leicester boiled over in a riot against police. This time the retaliation against oppression and deprivation overflowed to the City Centre on Saturday night.

Police could do nothing to prevent angry youth from smashing the windows of banks, posh shops and and fashion shops. In Highfields cars were overturned and set alight. By midnight the shopping centre was a scene of desolation. The main streets were empty except for police.

In Highfields, strangers were embracing each other. Blacks and whites were united and conscious of a common enemy. The local fascists must feel like they've been slapped round the face with a wet flannel. Even Goodson, the Chief Constable, was forced to admit that there had been no racial tensions leading up to the disturbance.

On Sunday the police took revenge on Highfields. They invaded dressed ready for combat with riot shields, batons and crash helmets. The community retaliated by erecting blazing barricades and throwing bricks and petrol bombs. They were defending their neighbourhood- not looting. The local residents were united against the police invasion and front doors were left open to let people in to hide and take refuge. Women and men of all ages were involved, black and white'.

Image (click to enlarge) from Leicester local paper at the time. Note caption: 'A dummy lies half out of a smashed window, still fully clothed'! 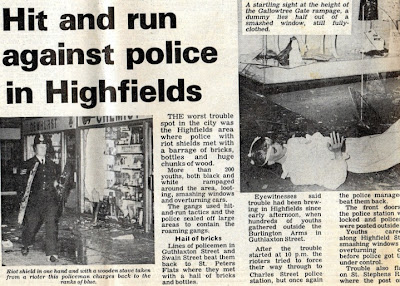 Posted by Transpontine at 5:58 pm