The death of artist Lucian Freud this week reminded me of going to his big exhibition at Tate Britain in 2002. As a sometime mandolinist the painting that has most stuck in my mind is his 'Large Interior, W11'.

It was painted in his west London flat in the early 1980s. A lot of the coverage of Freud's life and death has focused on his tangled family relationships - and yes this picture does include his daughter Bella Freud on the mandolin next to his son Kai Boyt, with Kai's mother Suzy on the right, and Celia Paul (with whom Freud also had a child) on the left. 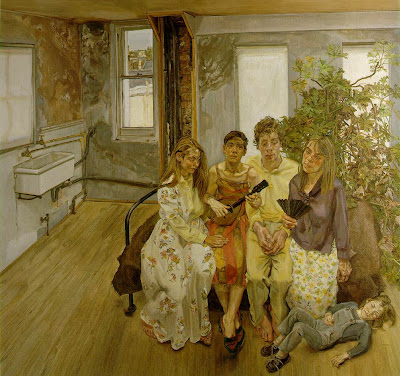 But there's more to this picture than a Hello-style celebrity line up. Its compositon is based on Pierrot Content, an early 18th century painting by the French artist Jean Antoine Watteau. This is one of a number of paintings by Watteau based on figures from the world of Commedia dell'arte, the travelling Italian theatrical troupes from where the stock theatre and ballet characters of Pierrot and Harlequin were derived. The troupes were often denounced as vagabonds, and indeed one of the main companies was expelled from Paris in 1697 after complaints about their 'gambling, gluttony and drunkeness'. Freud was also a travelling artist in his own way, or at least a refugee whose family left Berlin to escape the Nazis. 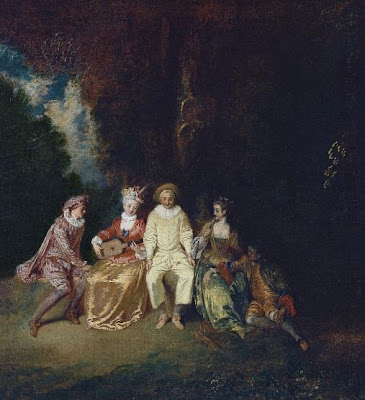 Posted by Transpontine at 7:42 am