Eye witnesses told of “brutality I simply could not believe", of women thrown to the pavements and beaten, of others holding back fearfully, yet desperate to help their sisters.

The shocking events of that night began when a man and a woman started arguing across the square from the lesbian disco at the Tabernacle, Notting Hill. The man chased the woman, threatening her with attack. Outside the Tabernacle she held a broken bottle in front of her to fend him off. At this moment a police constable arrived on the scene – and made a grab for the woman while the man stood by grinning.

Two lesbians went to the women’s aid and almost simultaneously police reinforcements – summoned when and by whom remains a mystery – rounded the corner in a van. There was utter confusion as the police milled around women leaving the disco, and accounts from people in different parts of the crowd tell no clear story. But within moments the violence had begun.

One woman was held spread-eagled at waist height. Her T-shirt was rolled up her body to bare her torso and she was repeatedly struck in the stomach with a truncheon, report eyewitnesses. Other women were thrown to the pavement. Still others were slapped and punched. There were serious injuries inflicted, and at least one woman had to be taken straight to hospital by ambulance.

But the trouble did not in there. Some 20 women were arrested for obstruction and assault and taken to a Notting Hill police station. In cells, in charge rooms and in the public areas of the station there was even further abuse – both verbal and physical. One woman called forward to have her details taken was slapped in the face and pushed back into the wall behind her. Another, in great distress at the scenes, was taken to the cells where three officers are said to have attacked her. Police women offered as much violence as police men, said those who were released from the station at 4 am the following morning.

Only a partial list of injury was given to the conference the next day. One woman had a cracked spine, another a cracked rib. Cuts and extravagant bruising were commonplace.

Lawyers attending conference gathered statements from eyewitnesses in preparation for the prosecution to be brought and for official complaints which are to be laid against the police involved.

Women who travelled to London for the conference and must now stay for the court hearings badly need financial support for their unexpected delay. Conference launched the Lesbian Social Defence Fund and contributions are urgently needed. They should be sent to the fund c/o A Woman’s Place, 48 William IV Street, London WC2'.

There's a brief account of this incident in this interview with Trisha McCabe at Gay Birmingham remembered:

'The first national lesbian conference was in London, in 1981 and I don't recall there being a second one. The women I went with were a real cross over between the revolutionary feminist group and the Women and Manual Trades group, some weren't part of our group but hung out with us because they were plumbers or carpenters and there was a link.

I can't remember anything about the conference itself, what it was for, the content, or what came out of it, but I do remember the excitement and the postcard which I thought was very cool. It had a black background with three lesbian symbols against a flash of fire. I sent one to my mother, her response was 'What will the postman think?', and my father was going 'I don't think you should worry about the postman'. I do remember there was a lot of aggro around it and the reaction of the police. For some reason the police were out a lot and a lot of different women got arrested and there was a real carry on. We must have been having some sort of protest, I remember running round on the streets, piling in when a copper tried to get someone out of the crowd, and making sure they didn't. One woman was put in a police car, and these other women went round and opened the other door and she just got out again, but ended up being arrested again and up in court the following morning, so we did a lot of hanging around in the police station. Another friend had this huge argument with the policeman and I dragged her off and nearly suffocated her, just holding her so she couldn't fight and get arrested. A couple of friends of mine got convictions, but I can't remember what they were doing'.

The photo below, which features in Anita Corbin's Visible Girls project, was taken in the Tabernacle, Notting Hill Gate, 1981 on the night of the National Lesbian Conference social: 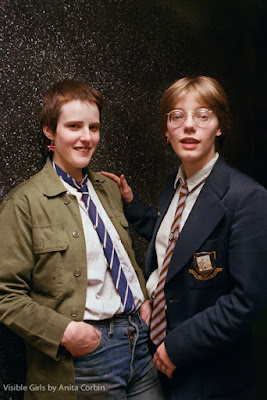 Posted by Transpontine at 7:47 am No comments: