From the Face magazine, February 1983, as part of an overview of the soundtrack to London nightlife at that point, an interview with the late Colin Faver 'One of the Camden Palace's four DJs who also plays Cha-Cha, the one nighter that provides a pansexual sideshow to Heaven's straight night each Tuesday'. 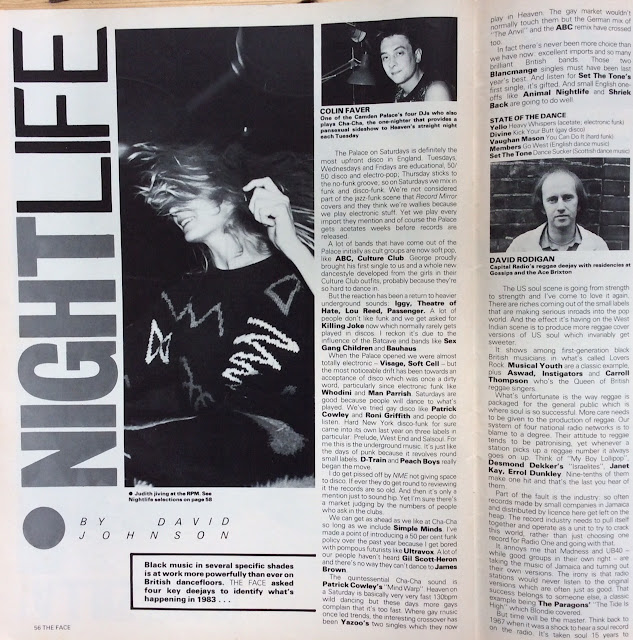 "The Palace on Saturdays is definitely the most upfront disco in England. Tuesdays, Wednesdays and Fridays educational, 50-50 disco and electro pop;  Thursday sticks to the no-funk groove; so on Saturdays we mix in funk and disco funk.

A lot of bands that have come out of the Palace initially as cult groups are now soft pop, like ABC, Culture Club. George proudly brought his first single to us and a whole new dancestyle developed from the girls in the Culture Club outfits, probably because they're so hard to dance in.

But the reaction has been a return to heavier underground sounds: Iggy,  Theatre of Hate, Lou Reed, Passenger. A lot of people don't like funk and we get asked for Killing Joke now which normally rarely gets played in discos. I reckon it's due to the influence of the Batcave and bands like Sex Gang Children and Bauhaus.

When the Palace opened we were almost totally electronic –  Visage, Soft Cell – but the most noticeable difference has been towards an acceptance of disco which was once a dirty word, particularly since electronic funk like Whodini and Man Parrish. Saturdays are good because people will dance to what's played. We've tried gay disco like Patrick Cowley and Roni Griffith and people to listen. Hard New York disco funk for sure came into its own last year on three labels in particular: Prélude, West End and Salsoul. For me this is the underground music. It's just like the days of punk because it revolves around small labels. D-train and Peach Boys really began the move.

I do get pissed off by NME not giving space to disco. If ever they do get round to reviewing it the records are so old. And then it's only a mention just to sound hip. Yet I'm sure there's a market judging by the numbers of people who ask in clubs.

We can get as ahead as we like at Cha-Cha so long as we include Simple Minds. I made a point of introducing a 50% funk policy over the past year because I get bored with the pompous futurists like Ultravox. A lot of people haven't heard Gil Scott-Heron and there is no way they can't dance to James Brown.

The quintessential Cha-Cha sound sound is Patrick Cowley's 'Mind Warp'. Heaven on a Saturday is basically very very fast 130bpm wild dancing but these days more gays complain that it's too fast. Where gay music once led trends, the interesting crossover has Yazoo's two singles which they now play in Heaven. The gay market wouldn't normally touch them but the German mix of 'The Anvil' and the ABC remix have crossed too.

In fact there's never been more choice than we have now: excellent imports and so many brilliant British bands. Those two Blancmange singles must have been last year's best. And listen for Set The Tone's first single, it's gifted. And small English one-offs like Animal Nightlife and Shriek Back are going to do well"

State of the Dance: 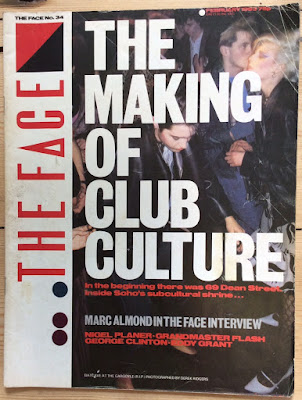 The interview was written by David Johnson who now runs the Shapers of the 80s website, which includes a wealth of information about London clubbing in that period, in particular the so-called Blitz Kids/New Romantics scene, which as he notes nobody actually in that scene called themselves! He discusses this article in the context of what else was going on in 1983 here.