I found this CBS inner sleeve in an old record the other day - actually it was Leonard Cohen's Songs from a Room from 1969. It sets out the arguments for records, presumably in the face of impending competition from cassettes and 8-track cartridges. Obviously CDs were still on the distant horizon, and MP3s beyond most people's science fantasies at that point. Still vinyl enthusiasts and retromaniacs would argue that many of these arguments still hold true. Of course they don't mention the downside, like the fact that said Leonard Cohen album is unplayable after I left it on the deck on a sunny day and it got warped. 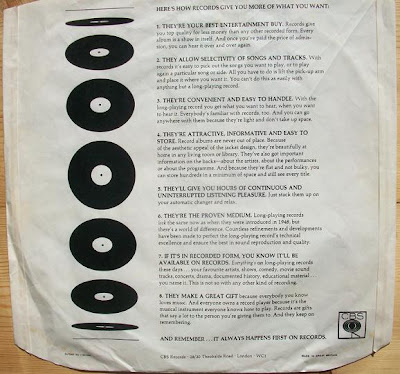 'HERE'S HOW RECORDS GIVE YOU MORE OF WHAT YOU WANT:

1. THEY'RE‘YOUR BEST ENTERTAINMENT BUY. Records give you top quality for less money than any other recorded form. Every album is a show in itself. And once you've paid the price of admission, you can hear it over and over again.

2. THEY ALLOW SELECTIVITY OF SONGS AND TRACKS. With records it's easy to pick out the songs you want to play, or to play again a particular song or side. All you have to do is lift the pick-up arm and place it where you want it. You can't do this as easily withanything but a long-playing record.

3. THEY'RE CONVENIENT AND EASY TO HANDLE. With the long-playing record you get what you want to hear, when you want to hear it. Everybody's familiar with records, too. And you can go anywhere with them because they're light and don't take up space.

4. THEY'RE ATTRACTIVE, INFORMATIVE AND EASY TO STORE. Record albums are never out of place. Because of the aesthetic appeal of the jacket design, they're beautifully at home in any living room or library. They've also got important information on the backs — about the artists, about the performances or about the programme. And because they're flat and not bulky, you can store hundreds in a minimum of space and still see every title.

5. THEY'LL GIVE YOU HOURS OF CONTINUOUS AND UNINTERRUPTED LISTENING PLEASURE. Just stack them up on your automatic changer and relax.

6. THEY'RE THE PROVEN MEDIUM. Long-playing records look the same now as when they were introduced in 1948, but I there's a world of difference. Countless refinements and developments have been made to perfect the long-playing record's technical excellence and ensure the best in sound reproduction and quality.

7. IF IT'S IN RECORDED FORM, YOU KNOW IT'LL BE AVAILABLE ON RECORDS. Everything's on long-playing records these days... your favourite artists, shows, comedy, movie sound tracks, concerts, drama, documented history, educational material... you name it. This is not so with any other kind of recording.

8. THEY MAKE A GREAT GIFT because everybody you knowloves music. And everyone owns a record player because it's the musical instrument everyone knows how to play. Records are gifts that say a lot to the person you're giving them to. And they keep on remembering.

AND REMEMBER... IT ALWAYS HAPPENS FIRST ON RECORDS'
Posted by Transpontine at 5:55 pm