Zazous: dancing under the Nazis in France

'Dancing, particularly upon Sundays, had been the rage among young people before the war, but after the Occupa­tion was banned both by Vichy and the Germans. The Germans were wary because such gatherings of young people might cause unrest. Vichy had other reasons: dancing was held to be indecorous when so many Frenchmen had been killed or were languishing in prisoner-of-war camps; it would encourage fraternization with German soldiers; it might promote promiscuity…Nevertheless, in early 1942 the prohibition began to be flouted. Cardinal Gerlier noted with regret that even some Christian families were infringing the ban, which he deplored because 'among all the different forms of recreation, dancing is the one that expresses joy most fully'. There was too much misery abroad and, he added in a reference to the Germans, it was wrong 'to dance under the gaze of those who observe us'.

Those ever-present 'observers' had lifted the ban in the occupied zone for their own troops by mid-1941 but had left the decision regarding French civilians to the Vichy authorities for 'if [they], in spite of the disgraceful defeat of their country, wish to dance, it is in the German interest not to prevent their so doing'. Since Vichy continued the prohibition, many private dancing schools, which were allowed, sprang up to circumvent the ban. Learning ballet and ballroom dancing was suddenly found to be a very popular activity. Measures were therefore taken to control the schools by imposing stringent conditions: not more than fifteen couples per session were allowed to take part; enrol­ments had to be for at least five sessions; apart from the dancers, only parents could be present; the sole musical accompaniment must be a piano or a gramophone; no drinks whatsoever could be served; advertising of classes was for­bidden. 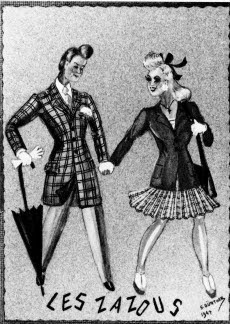 The high fees demanded by the schools limited their clientele and frequently they were patronized by middle-class 'zazous', the contemporary equivalent of the 'teddy-boys' and their partners. Descriptions of this gilded youth vary. Simone de Beauvoir terms them rebels against the Revolution Nationale, wearing long hair 'a la mode d'Oxford', sporting umbrellas… and generally comporting themselves in an anarchic, Anglophile fashion… They affected an outlandish garb: the young men wore dirty drape suits with 'drainpipe' trousers under their sheep­skin-lined jackets and brilliantined liberally their long hair, the girls favoured roll-collar sweaters with short skirts and wooden platform shoes, sported dark glasses with big lenses, put on heavy make-up, and went bareheaded to show off their dyed hair, set off by a lock of a different hue. The 'zazous' used English expressions, read American literature, and delighted in crooning, in the style of Johnny Hess, 'Je suis swing, dadoudadou/ Dadou la. . .oua. . .oua.'

But the 'ploutocrato-zazous', the exponents of jazz, were not held in esteem by the extreme collaborationists. Vauquelin, of the Jeunesses Populaires Franchises, held them to be 'the victory of democratic besottedness and Jewish degeneracy . . . the product of twenty years of Anglo-Saxon snobbery on the part of decadents . . . the proof ... of the physical and moral degradation of a section of our young people'. Vauquelin's squads of bully-boys were ordered to 'get them'. Thus on June 14, 1942 the squads carried out raids at Neuilly, in the Quartier Latin, and on the Champs-Elysees, cropping the hair of any 'zazous' they could find.The police joined in the hunt as well.

Youth will none the less be served. Thus, as the war dragged on, the ban on dancing was increasingly disregarded and the 'bals clandestins' flourished. In the countryside the jeunesse Agricole Chretienne reported in 1943 that dancing was going on in almost every canton of the Rhone, not only in isolated barns and remote houses, but even in the small towns. In Paris students danced in bars off the Boul' Mich' and 'la jeunesse doree' in more sleazy establishments near the Etoile. Dancing, jazz, outlandish dress became marks of a veritable counter-culture of youth, one which differed from that of the Resistance because it was effete, but never­theless anti-killjoy, anti-prudish, and, in the final analysis, pro-Allied'.