Following the death last week of Ian Tomlinson after being assaulted by police at the London G20 demonstration, I guess I'm not the only person whose mind wandered to the Angelic Upstarts classic 'The Murder of Liddle Towers' (1979). The answer, for those who don't know the song, is 'Police Killed Liddle Towers'. 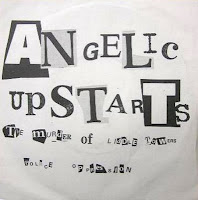 Liddle Towers was a 39 year old electrician and amateur boxer from Gateshead who was arrested outside the Key Club in Birtley (Northumberland) in January 1976. He told people that the police 'gave us a bloody good kicking outside the Key Club, but that was nowt to what I got when I got inside'. A few weeks after being released from custody he died of his injuries. An inquest into his death recorded the notorious verdict of 'Justifiable Homicide'.

The Upstarts sang: 'Why did he die, or did they lie? I think he's dead, so a doctor said / He was beaten black, He was beaten blue / But don't be alarmed, it was the right thing to do / The police have the power, Police have the right / To kill a man to take away his life / Drunk and disorderly was his crime / I think at worst he should be doing time / But he's dead / He was drunk and disorderly and now he's dead' . 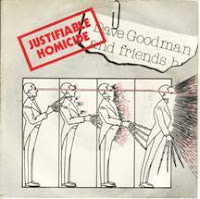 Sex Pistols producer Dave Goodman released a record called 'Justifiable Homicide' on the same subject in 1978, apparently with Paul Cook and Steve Jones from the Pistols playing on the track.

The Tom Robinson Band dedicated their 1979 album, TRB Two to Mrs. Mary Towers, the mother of Liddle Towers. The song Blue Murder on this album goes: 'Well they kicked him far and they kicked him wide / He was kicked outdoors, he was kicked inside / Kicked in the front and the back and the side / It really was a hell of a fight... / He screamed blue murder in the cell that night / But he must have been wrong cos they all deny it / Gateshead station - police and quiet/ Liddley-die... / Lie lie lie diddley lie /Die die die Liddley die'.

The Death Song for Alfred Linnell 1887

Liddle Towers was not the first or the last person to die at the hands of the police to be commemorated in this way. Way back in 1887, Alfred Linnell was killed in clashes with police during the Bloody Sunday demonstration n London's Trafalgar Square (pictured below). William Morris helped carry his coffin, and wrote the Death Song to raise money for Linnell's family: 'What cometh here from west to east awending? / And who are these, the marchers stern and slow? / We bear the message that the rich are sending / Aback to those who bade them wake and know / Not one, not one, nor thousands must they slay, / But one and all if they would dusk the day'. 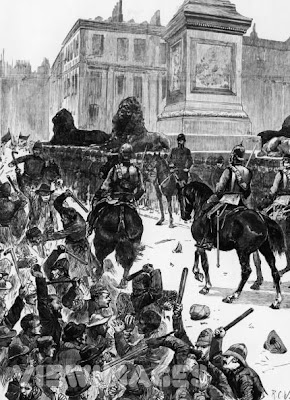 In 1974 Kevin Gately, a young student, was killed in Red Lion Square, London, during an anti-National Front demonstration. Gately is mentioned in a song called Spirit of Cable Street by People's Liberation Music, featuring Cornelius Cardew and recorded in 1976: 'Now at Red Lion Square the people fought with bare hands / Like their parents did down at Cable Street / Keep alive the fighting spirit of Kevin Gately / Brave anti-fascist fighter. / Unite in the spirit of Cable Street'.

30 years ago this month, on 23 April 1979, socialist teacher Blair Peach died at the hands of the police Special Patrol Group during anti-National Front protests in Southall, West London. Linton Kwesi Johnson recorded a track 'Reggae fi Peach' on his 1980 album Bass Culture (there is a dub version of this track on the album LKJ in Dub; Basque band Negu Gorriak have also recorded a version as Reggae Peachentzat).

There is also a 1979 song by Mike Carver called Murder of Blair Peach, while the track Justice by The Pop Group mentions both Peach and Gately: 'Who killed Blair Peach? / Political prisoners caught at Southall / And tried by kangaroo courts / A man had to have his balls removed/ After being kicked by the S.P.G. / It doesn't look like justice to me... / Who guards the guards / Who polices the police / What happened at Red Lion Square / Who killed Kevin Gately'.

Sinéad O'Connor's Black Boys on Mopeds also refers to the death (without naming Roach) - the sleeve of her album 'I do not want what I can't have' includes a picture of Colin and thanks to to the Roach family. The song includes the line: 'England's not the mythical land of Madame George and roses. It's the home of police who kill Black boys on mopeds'.

I agree with the sentiments of those punk and new wave tunes, but what terrible music! I saw most of the punk/new wave acts of that era, and while TRB were just trite live (as on record), the Upstarts gave me an awful headache (Motorhead in the late-seventies made my head feel worse, but can't think of any other band I'd rank above the Upstarts for giving me a headache). Linton Kwesi Johnson is much better! I can think of a load more anti-cop punk songs but none directly about cop murders. However, for older anti-cop songs what about The Equals "Police On My Back", an under-rated band with some great tunes like "I Get So Excited" and "I Can See But You Don't Know"

Apparently, The Jam song "Time for Truth" also has a Liddle reference, in "Bring forward those six pigs, we wanna see them swing so high".

Must be quite a few Irish folk tunes on this subject...

Oh yeah, and on another punk tip - "Carlo Giuliani" by Conflict

There is a mention of Colin Roach in the Deman Rockerz song 'Iron Lady'.

Thanks for all these, for this post I stuck to just English examples of police-related deaths, I could certainly fill a few posts with Irish ones and perhaps with others internationally.

The song 'UK' by the odd old punkers Crisis features the line 'Kevin Gately was an accident, know what I mean!!' I think it's from 1978 or 1979. They also had a song called No Town Hall all about the local Southwark struggle to resist the moving of the Town Hall on Peckham Rd to somewhere posher. Strange as the band were from Guildford. Some of them went on to be in Death In June, a band of some reputation for confusing artwork and message re: Nazism.

Good call Ruinist, can't believe Stewart missed that Crisis one. I was thinking about that Southwark Town Hall song recently, I used to have it on vinyl in a yellow sleeve I recall. Was that what it was about - I know their political judgement was later called into question (to say the least) but really was moving the Town Hall out of Camberwell/Peckham the priority struggle to sing about in the late 70s?

Jimmy Kelly was an omission, he died in 1979 in Liverpool in similar circumstances to Liddle Towers I believe - he is also mentioned in the Pop Group 'Justice' which has the line 'Jimmy Kelly arrested in Liverpool, And later died in custody/

mcfeat, the Partisans song 'Police Story' seems to be available on Itunes - if you search on Youtube there's also a version of it there. Not sure about the Pop Group track though.

‘Sparkbrook Pride’ features photographs of Sparkbrook residents and will being launched this spring in the UK.

Residents from the West Indies, Ireland, Pakistan and India feature alongside the newer communities from Sudan, Afghanistan and Malawi.

Change is overdue and on its way