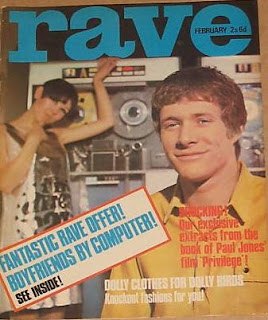 Paul Jones on the cover, 1967 + 'Fantastic Rave Offer: Boyfriends by Computer' (years ahead of its time) + 'Dolly clothes for dolly birds'
Rave was an English pop magazine started in 1964. As Jon Savage describes in a recent Observer article on '60s pop zines, Rave 'was five times as expensive as the weekly music papers, but in return you got an 80-page or so A4-size monthly, with excellent quality paper, meaty content and great photographs - by Jean Marie Perier, Terry O'Neill, Marc Sharratt and others... Rave went further and deeper with articles about Stuart Sutcliffe, the lost Beatle, a fashion round table with John Stephen and the Pretty Things, and notices about up-and-coming groups such as the Yardbirds. Photo shoots were set in (for then) unusual locations, like Portobello Road or Covent Garden, and stars including Jeff Beck were used to model gear such as PVC overcoats. Like Fabulous, Rave prominently featured young women writers. Cathy McGowan was a regular, along with Maureen O'Grady and Dawn James. However, if the ads for guitars were anything to go by, Rave also appealed to young men. Balancing teen pop with groups like the Yardbirds, the Byrds and the Who, it acquired a circulation of 125,000 by 1966'. 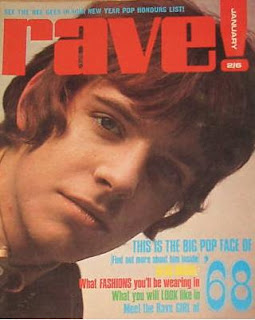 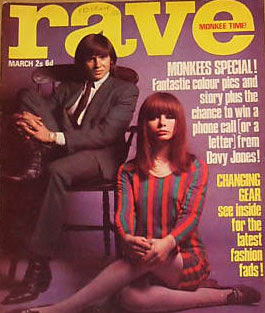 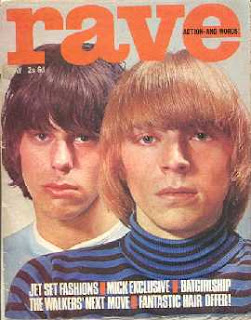 It looks fabulous - if only there was a decent modern equivalent. Or should I say, if only modern times warrented an equivalent.

Love the tag-line in the logo of the Yardbirds one ( http://1.bp.blogspot.com/_29Q2slWBvmY/SrvWQqyl96I/AAAAAAAACYs/gYqDYUPPftY/s1600-h/rave1.jpg )which says "ACTION AND WORDS"

Do you know if any of the old articles are online anywhere? I'd be interested to read the Stuart Sutcliffe one for a kick off

I used to pick this up when I was a teen. Great magazine and it kept us Americans up on the Brit Scene and ahead of those who didn't know it existed. I remember it was the pkace I first saw and read about the Yardbirds,

I am the Rave features journalist Dawn James and I was a teenager then and am still working at writing. We did not have any idea then that we were kind of making history or that The Beatles would live forever as they have or that Eric Clapton would have his dream that he told me about when he was 18 and would make a difference to the music world.
My pop star sister Twinkle is well and still as pretty and blonde and mad as ever.

I am still friends with Annie Barker who was features editor of Mirabelle all those years ago.

Still miss Adam Faith and Brian Jones and George Harrison. John Lennon got on with me fine but do not miss him so much,love his first wife Cynthia and still in contact with her.

Great to hear from you Dawn

Dawn My daughter is wrting a feature on the image depicting Davy Jones from Rave March 1967. D you know the identity of the woman sitting next to him ?

Hi I remember buying my one and only copy of Rave issue 3 on way home from school for some reason kept it in mint condition and still have,love looking at articles and photo's. Bought a lot of mags then POP weekly, record song books, and also Ready Steady Go!magazine have a copy of that also---am I sad?

This mag meant so much to me....I was living in San Francisco, was a freshman in high school, loved music...and England. I seem to remember an article in the form of a diary....it was all so wonderfully interesting and what can I say...it was the sixties.Wish I had all those mags still.
Thanks for the memories.
Pamela

Only 4 years too late - am searching for a Jimi Hendrix article/interview from the April 1967 Rave - anyone willing to photocopy or scan for me?
Thanks!

Rave used to have a connection to a really "fashion" band called the Raves. I saw them play in the West Village in 1966. Musically they were "garage"{ at best. But they sure had the clothes! Hendrix jammed with them just before he went off to the UK. For some reason I thought the mag - ran/managed financed the band. Its a very ancient memory at this point

Rave magazine was totally British with no connection to the USA. I used to buy it regularly in the mid-60s. I don't think it lasted that long. Unfortunately, I disposed of all my issues long ago. I remember it had articles on singers and bands and male and female fashion spreads featuring models like Twiggy and Jean Shrimpton. It also had an advice column. It was a unizex magazine appealing to guys and girls.

Wow now that's way cool, yep I used to get Rave n Hit Parader religiously every month when i was 16 -18 loved those mags 😆 great mags.

Hi me and my friends were mad about the yardbirds and around 1966 we made a huge poster out of pictures from Rave magazine and sent it to their office begging for them to arrange for us to meet the boys!! Well they did!! And I remember having the afternoon off school and going to London for the meeting! Had some great pictures and these got lost. Would love to see them. Does anyone know of any way this is possible? Think it was July. ( don't think it was 1967). It was a long time ago!!

Message for Dawn James. I used to work at Rave and Model Girl as a junior. My name was Shirley Wilson. Would love to chat. I remember you and Annie Barker, also names I worked with were Chelita Sekunda, Kathleen Jones, Dennis Barker, Maggie Koumi, Roger Pinney, Terry and a music writer names Julie can't remember her surname although that might have been another mag. Are you on FB?
My email address if you want to drop me a line is shirley@sdpr.co.uk

Great images in Rave but one thing lacking, never any credit to photographers!

Hi dawn, I worked in the advertising dept making up the editorial with advertising material on Rave magazine. I remember the first main adv. was the Canadian Novelty Shirt Co.also worked on Mirabelle, if you go to back issues I was Keith on teenage jury. Seems a long while ago 74 years old now

Thank you for all your fine work and sharing your memories. Rave was a huge part of our lives as we were starving for news and views on the pop scene. HAve you ever considered writing a book on those times? Cheers, Brent

There were a few credits in the early issues but wished that had continued!