Slim Gaillard, Jack Kerouac and Me

In Hanif Kureishi's latest novel, Something to Tell You, the narrator mentions being in a club in London in the late 1970s and meeting Slim Gaillard, prompting him to remark 'There can't have been many people alive with two pages devoted to them in On the Road... this was a man who'd known Little Richard and dated Ava Gardner, Lana Turner and Rita Hayworth'. 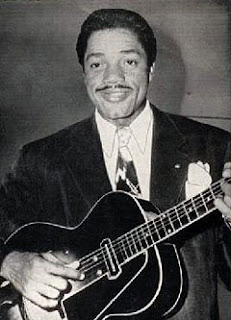 It reminded me that I too once saw Slim Gaillard (1916-1991), in the late 1980s (1987?) playing in a room above the Alexandra pub opposite Clapham Common in South London. By this time he was an old man, playing the piano, singing songs and still doing his trademark stream of consciousness private 'o-reenee' dialect.

Other than his age it wasn't vastly different from the scene described by Jack Kerouac in "On The Road" (written in 1951): '... one night we suddenly went mad together again; we went to see Slim Gaillard in a little Frisco nightclub. Slim Gaillard is a tall, thin Negro with big sad eyes who's always saying 'Right-orooni' and 'How 'bout a little bourbon-arooni.' In Frisco great eager crowds of young semi-intellectuals sat at his feet and listened to him on the piano, guitar and bongo drums. When he gets warmed up he takes off his undershirt and really goes. He does and says anything that comes into his head. He'll sing 'Cement Mixer, Put-ti Put-ti' and suddenly slow down the beat and brood over his bongos with fingertips barely tapping the skin as everybody leans forward breathlessly to hear; you think he'll do this for a minute or so, but he goes right on, for as long as an hour, making an imperceptible little noise with the tips of his fingernails, smaller and smaller all the time till you can't hear it any more and sounds of traffic come in the open door. Then he slowly gets up and takes the mike and says, very slowly, 'Great-orooni ... fine-ovauti ... hello-orooni ... bourbon-orooni ... all-orooni ... how are the boys in the front row making out with their girls-orooni ... orooni ... vauti ... oroonirooni ..." He keeps this up for fifteen minutes, his voice getting softer and softer till you can't hear. His great sad eyes scan the audience. Dean stands in the back, saying, 'God! Yes!' -- and clasping his hands in prayer and sweating. 'Sal, Slim knows time, he knows time.'

Slim sits down at the piano and hits two notes, two C's, then two more, then one, then two, and suddenly the big burly bass-player wakes up from a reverie and realizes Slim is playing 'C-Jam Blues' and he slugs in his big forefinger on the string and the big booming beat begins and everybody starts rocking and Slim looks just as sad as ever, and they blow jazz for half an hour, and then Slim goes mad and grabs the bongos and plays tremendous rapid Cubana beats and yells crazy things in Spanish, in Arabic, in Peruvian dialect, in Egyptian, in every language he knows, and he knows innumerable languages'.

Well in Clapham I don't recall bongos or people sitting on the floor, but I guess I was a 'young semi intellectual'! That was my only direct encounter with someone from the beat generation, other than once hearing Brion Gysin give a talk in Bedford library of all places (standing in for William Burroughs who didn't show- this was mid-80s).

Posted by Transpontine at 11:33 pm

Yes - I was there! Jason Rebello on piano too (oh-voutie).

I came across this site trying to track down recollections of the Dance Chase club at the Alexandra. Nothing seems to be on the web about this. My first encounter with Northern Soul and particularly good when they got Jonathan More from Coldcut to do a guest set. Used to love Flim Flam at the Harp Club too - a proper musical education.

Good to have some verification of my memories stoibee. I've googled Dance Chase a couple of times to no avail either, I was thinking about posting about it and similar places. My take is that because there is this notion of 1988 Acid House Year Zero, the years before are dismissed as just rare groove chin stroking. Whereas I would say that that 1985-8 were also very exciting years for dance music, not only because of a generation rediscovering Stax, northern soul and rare groove, but also in terms of all the great new music like Prince, Mantronix etc. I think Dance Chase had a mixture of old and new (at least I distinctly remember dancing to Janet Jackson in the Alexandra, unless that was another club in the same place). There was also Wear it Out (or was it Wear it Down?) in the Loughborough Hotel with a similar vibe, and on a bigger scale Jay Strongman's Dance Exchange at the Fridge. Not to mention Wendy May's Locomotion. Anyway if you (or anybody else) has more memories of these places, maybe I'll get it together to do a proper post - including scanning in my Dance Chase membership card which I still have (remember those banners they had with the kind of Keith Haring-ish figures?).

"(remember those banners they had with the kind of Keith Haring-ish figures?)"

Yes....I remember the banners, and Kevin Moore from Burnley who set the night up, painted the banners and the rest of the visuals and DJ'd. Where is he now?

My dad is 87 and recently confided that the fist movie he saw was Hellzapoppin. I told him I had seen Slim Gaillard at the 100 Club in the mid eighties and we watched some clips together on YouTube. I was a teenager when I saw Slim Gaillard. I didn't read On the Road until I was in my late twenties. I bumped into him in York once and he chatted about meeting Ronald Reagan.