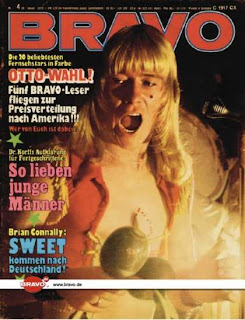 Simon Reynolds kicked off a week of posts about The Sweet with the provocative question 'was there in fact a better British hard rock vocalist of the 1970s than Brian Connolly of The Sweet?'. Of course die-hard 1970s rockists would have been horrified at the very suggestion of admitting The Sweet to the hard rock canon - a glam pop band who didn't even write their biggest hits.
But anybody listening to tracks like Ballroom Blitz or Teenage Rampage now would surely have to agree with joint songwriter Nicky Chinn that 'the records sound quite raw and punky... this was pop that had an edge: there were hard guitars, there were crashing drums'. Not only that but the songs were short, punchy and relatively fast compared with some of the ponderous 'real' heavy metal of the time - what Barney Hoskyns has called 'The beefed-up, turbo-charged 'Chinnichap' sound - bubblepunk'.
The band even had a proto-punk attitude several years before The Sex Pistols, as Chinn recalled: 'We were doing "Ballroom Blitz" on Top of the Pops, and all day Steve [bassist Steve Priest] had been acting a bit strangely. After the opening bars of the song, he turns round with his back to the camera, and on the back of his leather jacket were the words FUCK YOU'. Unsurprizingly, this was never broadcast by the BBC. 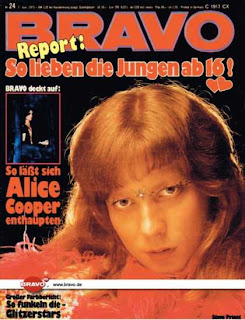 Even their gender bending is often derided, because unlike Bowie they didn't learn it from Lindsay Kemp. They are sometimes bracketed with Slade as 'brickies in eyeliner' (to use Siouxsie Sioux's memorable phase). But for a generation of pre-pubescent children like me watching in awe on Top of the Pops it probably had a bigger impact than Bowie, if only because they were so ubiquitous. As glam blogger the Stardust Kid puts it: 'In most respects glam rock is totally fake, but to young kids like me it was real and alive. It may have been 'Brickies in eyeliner' but to the kids it was 'stardust for the dudes''.

I'm not sure I would go as far as Barney Hoskyns in suggesting that The Sweet influenced black American style from George Clinton to Prince, but who know maybe he's right that 'Space-age glam also played a large part in the look of P-Funk. George Clinton was funk's own Roy Wood, while Bootsy Collins - the rhinestone-encrusted overlord of space bass - was the Sweet's Steve Priest on Pimpmobile overdrive'.
But I do agree with Todd Haynes (director of glam celebration Velvet Goldmine) that glam was 'the result of a unique blending of underground American rock with a distinctly English brand of camp theatricality and gender-bending. And for a brief time pop culture would proclaim that identities and sexualities were not stable things but quivery and costumed, and rock and roll would paint its face and turn the mirror around, inverting in the process everything in sight'.
From Youtube - The Sweet on Top of the Pops in 1973 performing Blockbuster - all silver platform shoes and gold catsuits. The band were sometimes accused on stealing this riff from David Bowie's Jean Genie - in fact both of them probably took it from The Yardbirds 'I'm a Man', itself a cover of Bo Diddley - orginality is often over-rated!
Most quotes from Glam!: Bowie, Bolan and The Glitter Rock Revolution - Barney Hoskyns (London: Faber: 1998). Brian Connolly (top) and Steve Priest (bottom) on the cover of German teen magazine Bravo, 1973 (sourced from Cover Browser)
Posted by Transpontine at 9:41 pm

I always remember the debates about which band did falsetto harmonies first - Sweet or Queen
I first saw Queen on some Saturday morning show like The Geordie Scene with a film of them doing Coco or Poppa Joe. They were bubbglegum for sure then and big in the USA but they were quirky in their rhythms - an aspect of early glam I still love eg Rock and Roll Part Two, Johnny Kongos.
Their b sides and albums had definite aspirations to be hard rock. SweetFA , Desolation Boulevard. I recall debates in the teen mags of the day with Deep Purple fans deriding The Sweet for their rock pretensions and glam fans dismayed at the band's rock workouts at live gigs. Most agreed they were a fine live act and quite filthy!