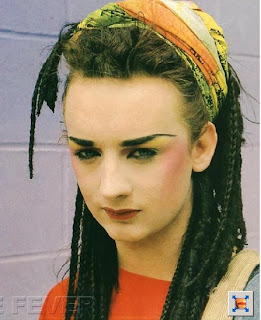 I won't be joining the tabloids in gloating over the fate of Boy George, jailed last week for 15 months for 'handcuffing a male escort to a wall and beating him with a chain'. I don't want to defend his actions - he seems to have got stuck in druggy paranoia, with bad consequences both for himself and others - but I hope he gets out soon and doesn't get too hard a time inside.
I am sure he can handle himself though - not just through his legendary bitchy wit (as highlighted in his entertaining autobiographies Take it Like a Man and Straight) but through his physical presence. As I recalled in a previous post, I remember seeing him at Turnmills in the mid-1990s standing head and shoulders above most of the crowd and built like a working class Irish South London geezer - which is actually part of what he is.
I was never a great fan of Culture Club's music, but I did appreciate the global gender confusion they caused. I actually liked Boy George's DJing though - people were snotty about him not being able to mix, but he wasn't just a celebrity putting on obvious tunes. He put out some great dance tracks on his More Protein label, including Lippy Lou's wonderful lesbian white ragga pop house anthems Freaks and Liberation.
Anyway I am sure we haven't heard the last of Mr George O'Dowd.
Posted by Transpontine at 10:48 pm

Got to agree with you there, Transpontine, he's much too talented to disappear from our lives.

I interviewed him a few years ago and was tremedously impressed by him, he was very, very honest and absolutely hilarious. A joy to interview, in fact.

I thought he was a pretty good DJ too. I remember seeing him sometime in the mid-nineties maybe and he played some great stuff, including What I Am by Edie Brickell - totally out of context with a lot of the other stuff he played but it worked like a dream.

I love the fact that Everything Starts With An E sampled the theme tune from the old b/w Robinson Crusoe series they used to show in the six weeks holidays. He deserves our gratitude for his involvement in this alone.

I've knew him when he was 15, met him in the bogs of the Vortex. He was always charming, warm and witty.
He did feel at the time though that being gay (which he described to me in explicit detail) was temporary and that he would end up married with children.
As I saw him through the years he grew bitchier.
Maybe it was the drugs?
I feel sad that he is going through this experience. He seems unable to stop 'undoing' himself. Self-sabotage.
He is one celebrity that will have a genuinely interesting auto-biography at the end of it though.