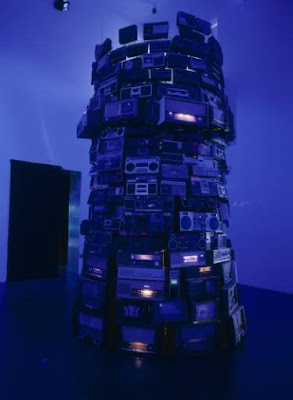 Only a few days to go of the exhibition by Brazilian artist Cildo Meireles at Tate Modern (London) - it closes on 11th January. If you haven't been yet, I strongly recommend it.
The exibition starts with some of his earliest work from the 1970s under the Brazilian military dictatorship, including his Insertions into Ideological Circuits which involved printing political messages on banknotes and Coca-Cola bottles and putting them back into circulation.
Several of the installations feature sound elements. Fontes is a room full of 1,000 clocks ticking in different rhythms and 6,000 suspended rulers making their own sound as people push through them. Babel )pictured) is a tower built of around 800 radios, bursting out white noise which shfits as you move around it. It is also a kind of museum of the radio age -or what the artist has described as ‘an archaeological sample of events - with old style valve radios at the bottom and smaller transistor radios at the top.
Red Shift is a room set up like a domestic environment with everything - furniture, food, objects - in red. Watch out for a copy of Ottowan's D.I.S.C.O. in red vinyl (seriously). The final room, Volatile, is quite magical. If you've never waded barefoot through talcum powder by candlelight, now is your chance. But be warned - there will be probably be long queues for this and the Red room, so you might want to get there early.
More on Babel:

'The fact that the radios gathered together in this installation are tuned in to many different stations underscores, moreover, the notion that, even within a context of growing interrelationship between peoples, it might be possible to generate and assert difference. In opposition to the social entropy proclaimed in the narrative of Genesis, the demise of a universal language - and the subsequent end of a presumed transparency of meaning in the spoken language of all the inhabitants of the world - might in fact be associated with the interruption of a colonial rule that imposed the language and culture of a single nation upon everyone, and therefore constrained the emergence of alterity. Connected yet different, members of that network cannot thus be associated with exclusive interests nor reduced to a uniform amalgamate, being better understood as individual parts of a 'multitude' which produces and shares that which it imagines it holds in common. 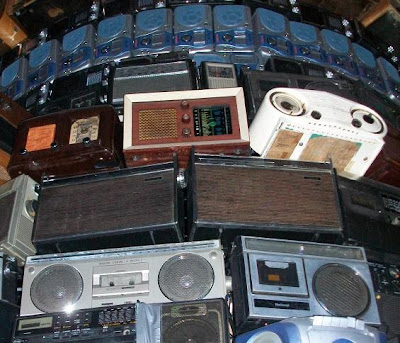 However, the other elements that make up Babel problematise this communal utopia, indicating that the expression of various opinions is an insufficient condition for the most equitable division of power between distinct human groups. From the first glimpse of the work, it is obvious to the visitor that the radios piled up by the artist to form the tower are bearers of the most varied technologies - from the obsolescent to the excess of resources. This diversity may be understood as an index of the unequal access of nations (and also of the many social strata within each one of them) to the power of communicating with that which is distant and, by this token, of asserting that which they deem to be important. In fact, the 'right to narrate' that all nations and communities constantly claim - the right to be heard, recognised and represented is always conditioned by the hierarchical (albeit disseminated and dispersed) control of technological media and political instruments through which it is exercised, thus rendering such media and instruments integral parts of the 'ideological circuits' that anesthetise difference and block change in stratified societies.
Even though they occupy the same space in the exhibition room, using the same means of transmission, these many different radios allude to the simultaneous presence, among different peoples or even within a single nation, of distinct social times. Thus they symbolise the asymmetrical distribution of power that allows for the assertion of sovereignties and the decentralised yet effective command of the mechanisms that structure exchanges between distant places.
The drone produced jointly by all of the sets also suggests that the immeasurable quantity of information transmitted by radio in the contemporary world - as well as by television and even more so by the internet - eventually obscures the content of intended communications, emptying them of clearly discernible meanings. Within any given transmission frequency, the number of stations is great enough for their broadcasts occasionally to overlay each other, mix or even cancel one another out. Thus, the listener is alienated from the speech of others less through scarcity than through excess of information, provoking a 'negative ecstasy of radio'. It is an ecstasy that reduces differences not by rendering that which is communicated more transparent but, on the contrary, by rendering indistinct each discourse that desires to affirm itself as unique. Paradoxically, this erasure of alterity becomes all the greater as the means of communication needed for its expression become more widely disseminated.'
From: 'Where all places are' by Moacir Dos Anjos in Cildo Meireles, edited by Guy Brett (London, Tate, 2008)
Posted by Transpontine at 5:16 pm