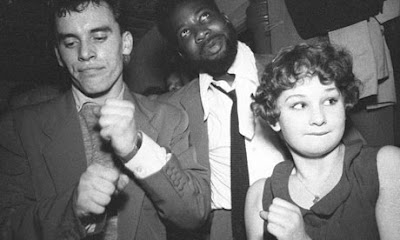 '... in 1956, I heard about this new dance craze called hand-jiving. So I made a number of visits to a coffee bar called The Cat's Whiskers in Soho. Cliff Richard used to appear there. I remember the place was crowded with young kids when I arrived. It was pretty late, but not after midnight. In those days, midnight was the witching hour; things closed up after that. I did not speak to anyone, but I do remember the atmosphere was very jolly. Wholesome would be a good word. And the reason they were jiving with their hands was just because there was precious little room to do it with their feet. Everyone was doing it, which was quite a bizarre sight.
The craze just fascinated me. It seemed like a strange novelty, but it really caught on. There were quite a few variations they could do, like one called the mashed potato... What's more, hand-jiving was an activity that everyone shared and had a go at in their own particular style. Not being a great jive artist myself, it was one of the things I could do, and I used to join in. .

how interesting! the Cat's Whiskers was my favourite hang-out before emigrating. Yes, hand-jive was great fun. I remember so little of it now; and my Canadian friends are bemused when I give them a demo. There was such a marvellous atmosphere in that coffee bar. It is a treasured memory of my younger days.