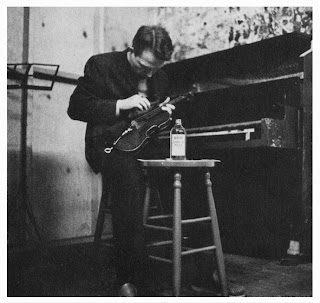 His many sound pieces included 'Drip Music' (1959): 'For single or multiple performance. A source of dripping water and an empty vessel are arranged so that the water falls into the vessel' and 'Comb Music' (1959): 'For a single or multiple performance. A comb is held by its spine in one hand, either free or resting on an object. The thumb or a finger on the other hand is held with its tip against the end prong of a comb, with the edge of the nail overlapping the end of a prong. The finger is slowly and uniformly moved so that the prong is inevitably released, and the nail engages the next prong. This action is repeated until each prong has been used'.

Photo is of him performing 'Solo for Violin' (1964) at 359 Canal Street, New York City during Flux Fest at Fluxhall - a piece for which the score reads simply 'polishing'.
Posted by Transpontine at 7:30 am