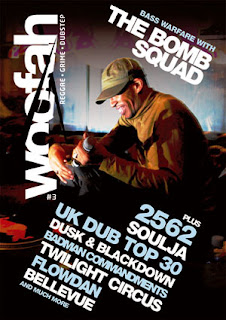 Woofah issue three has been out for a month now, but it's taken me a while to get round to reviewing it. If you haven’t seen previous issues, it’s a lovingly produced glossy A5 zine, aiming to cover reggae, grime and dubstep. As well as taking seriously musics that are under-represented in print (in my view), the contributors also have a strong sense of the way music emerges from connections between people in specific places and scenes, from their life journeys through these times and spaces, and from the sonic dialogue that is opened up when sounds created in a particular zone are transplanted somewhere else.

In the latter respect, I was fascinated to read the interview with The Bomb Squad (legendary producers of Public Enemy, among others). In the latest twist in the Black Atlantic dialogue, these African Americans have been seriously checking out dubstep made by people in England many of whom in turn would have grown under the influence of their groundbreaking hip hip productions. It’s all about the bass – ‘It’s dark, it’s heavy. At the same time its rebellious’ (Hank Shocklee).

Elsewhere an article on the history of UK Dub follows a route from Jah Shaka’s Dub Club at the Rocket on London’s Holloway Road through to Aba Shanti’s University of Dub at Brixton Recreation Centre, while Soulja of FWD recalls London and Essex hardcore and garage nights at places like Telepathy in Stratford, the Berwick Manor Club and Grays (Grays Inn Road) on her journey through to becoming dubstep promoter and working with Rinse FM – nearly 14 years on air as a London pirate despite crackdowns including an ASBO that banned one of the people involved from going above the 3rd floor of any building!

You can get it here. and you really should.
Posted by Transpontine at 11:22 pm