"In 1927 the charge of keeping a disorderly house at 25, Fitzroy Square, near Euston Station, was brought after a long period of surveillance by the police . The actual charge was that in the house there were: 'divers, immoral, lewd and evil disposed persons tippling, whoring, using obscene language, indecently exposing their private parts and behaving in a lewd, obscene and disorderly and riotous manner to the manifest corruption of the morals of His Majesty's Liege subjects, the evil example of others in the like case offending and against the Peace of Our Lord the King, His Crown and Dignity'.
Let's take a look at some of these heinous offences as related by police observers. Police Sergeant number 42 reported on January 3rd: "At 11.35. p.m. three men entered the basement door. The door was opened by a man wearing pyjamas... I saw them dance around him in the hall. At 12.20 four men were admitted by the man wearing pyjamas, who kissed one of the men as they entered. At this time the gramophone was playing in the front room, people were jumping and dancing making a very rowdy noise. I could hear the men in the front room singing and talking in effeminate voices. At 3.30. a.m. two men came out of the door. They were very drunk, vomited in the area, struggled up the steps and left."
On another occasion: "I saw a man standing at the door in a dressing gown. He kissed one of the men as they entered, laughed and shut the door. At 12.30. a.m. I saw four men walking in couples approach the house, they were cuddling.. one another as they walked and speaking in low effeminate voices ... They were men of the nancy type. "
….Several of the guests were followed after they left the house, with officers noting that the men cuddled each other whilst waiting for a bus. They were described as being 'powdered and painted'. The policeman who followed them said that they smelt strongly of perfume and guessed that, by their appearance, they were 'West-End poofs or male opportuners.' 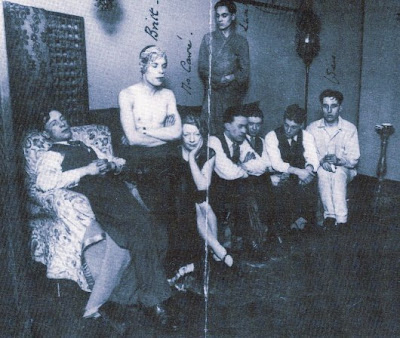 Police photograph in the aftermath of the 1927 raid,
showing Robert Britt (second from left)
Because of what they had heard and seen the police considered it their duty to raid the house on the 17th January, 1927. They surprised six people in one of the rooms. Robert Britt, a twenty-six-year­old dancer, was wearing a thin black transparent skirt with gold trimming and a red sash tied around his loins. The ladies shoes he was wearing caused him to appear taller than the other guests. He was naked from the waist up. Other people in the room were either in pyjamas or partly dressed. It seems difficult today to understand what offence they might have committed and even in the twenties a legal dispute ensued as to what exactly a disorderly house was. Several of the defendants were found not guilty but Britt was sentenced to eighteen months hard labour and others up to six months without hard labour".
Source: In Darkest London: antisocial behaviour 1900-1939 - Steve Jones (Wicked Publications, 1994).
Posted by Transpontine at 8:17 pm

I've been watching the 1980's series 'Brideshead Revisited' again the last few weeks. This post reminds me of some of the scenes in the film.