From Brooklyn, Onomé Ekeh recalls a life in dance from New York to Switzerland:

1. Can you remember your first experience of dancing?
No. It must have been when I was preverbal. I was always inclined to dance.

2. What’s the most interesting/significant thing that has happened to you while out dancing?
Entering a trance and replicating slash imbibing the moves of dancers far more advanced and superior to me.

3. You. Dancing. The best of times…
8 hour jags with a gallon of water, emerging at 10 a.m in the morning in a cloud of baby powder--thanks to the rocksteady crew types who need the stuff to be fluid.

4. You. Dancing. The worst of times…
Crowded. Cokeheads. People bogged down by alchohol, parking on the dancefloor. Insensitive DJs...

5. Can you give a quick tour of the different dancing scenes/times/places you’ve frequented?
Early in my NY career, I would go to BoB a bar on Eldridge St. on the lower east side on Wednesdays and Fridays'--this was pre-Giuliani, crowded, free, old school funk till dawn. Then I was introduced to "The Loft" on Avenue A, classic deep house on Saturday nights, shortly thereafter, The AfterLife (Deep House) which started from 3 am in a small theater company space in Tribeca--actually round the corner from what came to be known as "Body and Soul", sort of the last stand- a "Tea Party" from 4 to 10pm on Sundays. Classic house with Danny Krivits, Kim Lightfoot and others. Finally plagued by tourists and people on drugs...

6. When and where did you last dance?
At a cinderella type club in Zurich, Les Halles -which is normally a restaurant but on Christmas Day it turns into a fabulous dance party, straddling the balance of electric disco and paris house... 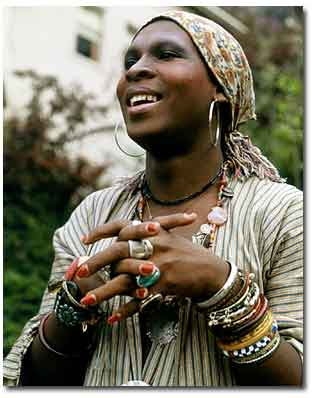 Sylvester, photo © Clay Geerdes7. You’re on your death bed. What piece of music would make your leap up for one final dance?
Hmmm. Sylvester (pictured), (You Make Me Feel) Mighty Real? Disco Inferno? Most anything 70s disco would raise me from the dead...