1987: dancing in Brixton and beyond

The Acid House moment of the late 1980s, like the Punk moment a decade or so previously, is often presented as a kind of Year Zero where something entirely new exploded against a backdrop of boredom and mediocrity. To sustain this narrative it is necessary to pretend that nothing much was going on beforehand. Simon Reynolds' (generally excellent) Energy Flash is a case in point: 'In 1987, London clubland was as crippled by cool as ever. The Soho craze for rare groove (early seventies, sub-James Brown funk) represented the fag-end of eighties style culture, what with its elitist obscurantism... and its deference to a bygone, outdated notion of 'blackness''.

For me personally, the house and techno scenes of the early 1990s were a period of unprecedented intensity. But was the time before it really so dull? Not for me. January 1987 was the time I first moved down to live in London, initially squatting on Brixton's Tulse Hill Estate while working in Lambeth Council libraries by day . I remember that year as being a time of great musical innovation, as well as appreciation for some fine older music.

It was a time of amazing electronic beats - 1986 saw the release of Janet Jackson's Control (produced by Jam and Lewis), Who is It? by Mantronix and Joyce Sims All n All. A time when the possibilities of sampling were first being explored - Pump up the Volume by MARRS and Coldcut's Say Kids What Time is It? both came out in early '87. It was the golden age of Def Jam, with License to Ill by the Beastie Boys and Public Enemy's debut Yo! Bum Rush the Show both coming out that year too. I remember lying on the beach in Majorca that summer listening to it - if that was 'outdated blackness' it sounded good to me (though the big track that summer in Majorca was I Found Lovin' by the Fatback Band, must have danced to that every night). And yes, a time of house music breaking through - Steve 'Silk' Hurley's Jack Your Body went to number one in Britain in January '87.

In clubs you would hear an eclectic mix of all this with earlier soul and funk sounds. The latter was partly being rediscovered as a result of checking out the source of hip hop samples. For instance I remember dancing to Jean Knight's Mr Big Stuff at Wendy May's Locomotion at the Town and Country club in Kentish town, a Friday night feast of Stax, Motown and Northern Soul. Like many people, I'd first heard the chorus as a sample in 1987's Mr Big Stuff by Heavy D and the Boyz.


One of the first clubs I went to in London '87 was a night called Wear it Out, in a room above a pub in Brixton - the Loughborough Hotel. Music was a mixture of classic soul/funk and new beats. I know it was there that I first heard Prince's Sign o' the Times, which also came out that year. The same venue became a big part of Brixton nightlife in the late 1980s/early 1990s, going on to become a gay club where they played lots of Stock Aitken & Waterman dance pop and then from 1989 to 1997 the home of the Mambo Inn, legendary Latin & African music club.

Danse Chase (or Dance Chase) upstairs at the Alexandra at Clapham Common had a similar musical mix of old and new. I remember hearing tracks there from Michael Jackson's Bad LP, another 1987 classic, on the day it came out. The image on the membership card, with its Keith-Haring-meets-the-Aztecs figures, was repeated on banners around the walls. I believe they were designed by promoter Kev Moore. 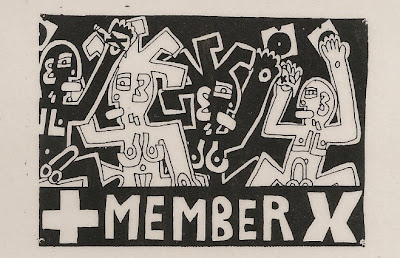 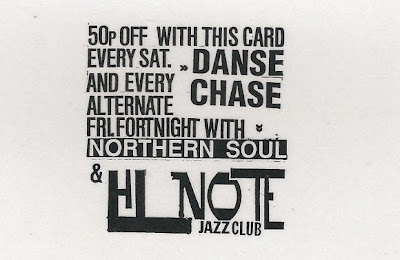 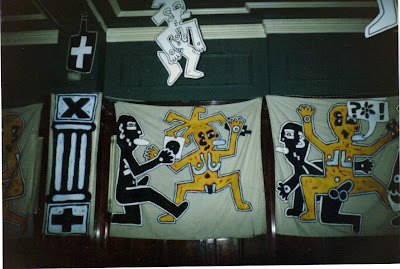 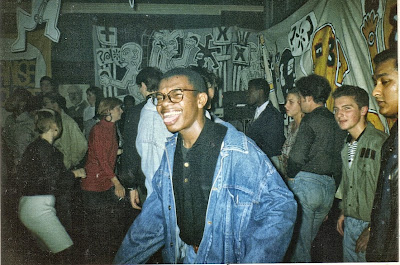 Danse Chase diversified into Northern Soul with what became the Southside Soul Club (some good memories of that place at Soul Source - photos of Dance Chase also sourced from there). They also had a jazz night (Hi Note), which was where I once saw Slim Gaillard. 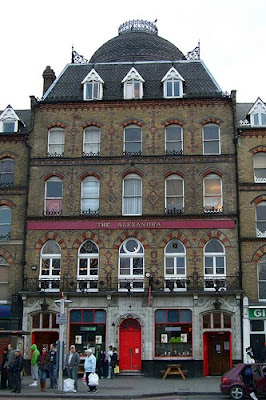 This short film of dancer Keb Darge was shot at the Alexandra in that period:

Another Northern Soul night was Agent 00-Soul at the George IV in Brixton Hill. I remember there being some serious dancers there, including a guy in a wheelchair who put my wannabe Wigan Casino moves to shame. 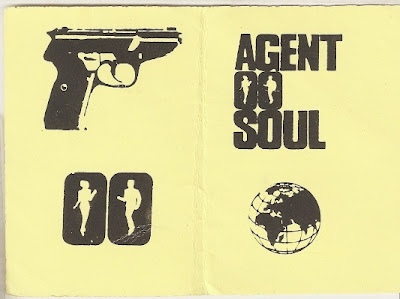 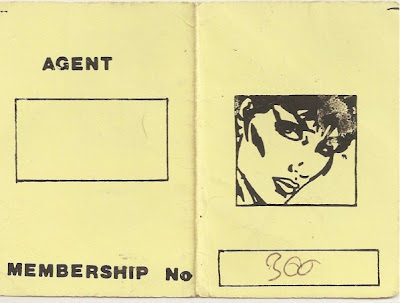 Also went out sometimes to the 121 club in Brixton, the squatted anarchist centre at 121 Railton Road (later home to Dead by Dawn). Some friends of mine from the South West London Direct Action Movement put on a party there that year, I recall flyering the Prince Albert pub and then dancing to disco in the basement at 121.

One of the biggest nights was Dance Exchange at The Fridge on Saturdays in Brixton, a big dancefloor with banks of TVs around it. 1970s 'Rare Groove' was a big part of the sound there, with great tracks including Maceo & The Macks 'Cross the Tracks', Bobby Byrd's 'I know you got soul' and The Jackson Sisters 'I believe in Miracles'. But plenty of contemporary sounds too. And yes I wore the uniform of black Levi 501s (bought from Allders in Croydon) and Doc Marten shoes, with flat top from Andy's/Haircut Sir? at bottom of Tulse Hill. 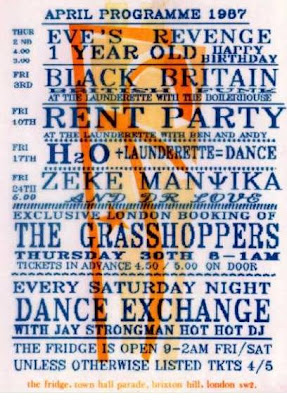 It was a similar mix of the old and new at the PSV club in Manchester where I went a couple of times in that period (the club in Hulme, also known as the Russell Club and the Caribbean Club had previously been the location for the first Factory club). This flyer from 1987 gives a sense of the variety of music to be heard out in that year: Tackhead, Trouble Funk, Sly & Robbie, Eric B, Joyce Sims, Mantronix, Prince etc. (there's an account of PSV by Mancky, who recalls tracks including Jocelyn Brown ‘Somebody Else’s Guy’, InDeep ‘Last Night A DJ Saved My Life’, Gwen Guthrie ‘Nothin’ Goin’ On But The Rent’, A Certain Ratio ‘Shack Up’ and Funkadelic 'One Nation Under a Groove'). 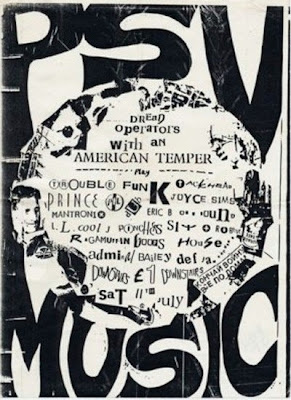 Finally in Brixton there was the Prince of Wales, a gay club on the corner of Coldharbour Lane. A cheap night out - £1 in rather than £5 for the Fridge - my main memory of it is dancing to extended mixes of Madonna and Hi-NRG tracks like Taffy's I Love My Radio. There's still a pub there, but it's half the size of the old gay club which occupied that whole corner, including where the KFC is now. I think the club closed down in the late 80s having achieved some notoriety in the 1987 trial of serial killer Michael Lupo, who was arrested after being spotted in the place.

That gloomy ending aside, 1987 was a pretty good year!

(a really good take on London 1980s nightlife is You’re too Young to Remember the Eighties – Dancing in a different time, which Controlled Weirdness wrote for Datacide. Great tales of warehouse parties, the Wag, Mud Club etc. and the times when almost all legal clubs closed by 2 am)

thanks for this - I, too have different memories of the London scene in the mid 80s: the warehouse parties in Camden & Kings Cross, the Acid Jazz dancers at Dingwalls on sunday afternoons (in fact, the whole concept of actually dancing to jazz!) and checking Tommy Chase's outfit. Through the mid-80s, before house really took hold, the mess of sounds - African Hi Life, rocksteady and rockers, N Soul, and funk, Soul II Soul, original R&B, electro and so on.

For me, the subsequent house and techno years were much more elitist, with jazzfunk DJs discovering electronic music and bringing their sensibilities to what started out as a very open minded scene.

The fashions were cool, too, the last shout before sportswear really took over, from the patches, bumflaps, 'status' labels to the neo-mod gear.

Great blog, by the way!

Blimey,that Danse Chase members card took me back. Great piece, thanks for taking the time to put it together. Cheers, Iestyn

Blimey, that Danse Chase members card and images are familiar. Totally agree with your comments about Simon Reynolds' dismissive swipe of the post-punk, pre-house era. Great writer, but a cheap shot. Currently researching a project focused on a Trouble Funk show at the T&C Club in 1986. The idea is then to broaden the story to take in some of the material you've written about. Thank you for taking the time to post it - makes me glad that people haven't forgotten about a very exciting time. If you have any go go recollections feel free to contact me: iestyn@digitalgas.co.uk

Good to hear from you, Trouble Funk project sounds interesting - what do you have in mind - a film, or a book? I know Stewart Home can talk at length on Trouble Funk and Go Go, not sure he was at the T&C gig but might be worth contacting him.

There was also the club downstairs at St matthew's Chuch on Friday nights.

And the warehouse parties (1986, I think) at the closed down Dickie Dirts at the Camberwell end of Coldharbour Lane. Remember one night where the building was heaving to the repeated playing of Aint Nothing Going On But The Rent, by Gwen Guthrie.

you know I started my journey onto the scene by accident. like Alice through the looking hole I was getting it on the Junping Jack Flash, Royal House.and ive neer stopped falin. ,:)

Hello
Just decided to do a set at my husbands school staff party. He is the Head and gossip in staff room means they've discovered I used to DJ as ran Wear it Out at The Loughborough hotel with my friends and did sets at The Fridge and The aAlexander pub in Clapham too in the mid 80's but as i am now 55 and my memory blurred and I have lost all my vinyl..don't ask..then your blog
really helped
Thanks for the fab memories

Bought back memories as I lived on tulse hill estate when P.O.W was a gay pub only thing that put me off was Brixton police coming to my flat asking questions which turned out aiding them to catch Michael lipo

Remember Rod from Eastenders lived on Tulse Hill Estate at that time too.