'Queer urban culture was the site of diverse intersecting modes of queerness and "normality," coalescing around their desires for homosex, sociability, and intimacy. These antagonisms crystallized in two prominent annual events: the Chelsea Arts Ball and Lady Malcolm's Servants' Ball -both held at the Royal Albert Hall. 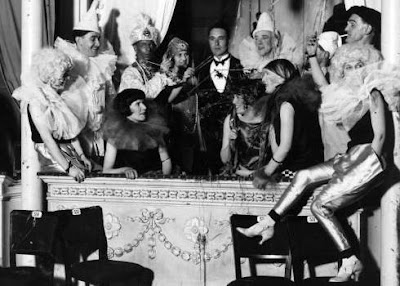 The former, in particular, was a centerpiece in the metropolitan social calendar, a New Year's Eve costume ball that attracted massive media attention and crowds of up to 7,000 socialites, artists, and ordinary Londoners in elaborate fancy dress. These "true pageants" were, observed Kenneth Hare in 1926, notable for their "variety, inventiveness, vivacity and colour." For many men, becoming part of this carnival gener­ated a palpable sense of release. Hundreds of working-class queans flocked to both balls, discarding the masks they wore in everyday life, wearing drag, dressing outrageously, and socializing unashamedly while never appearing to be anything out of the ordinary. In so doing, they were further protected by the Albert Hall's unique legal status: it was outside the Met's operational sphere. For once, temporarily and locally, men could fully escape police sur­veillance. 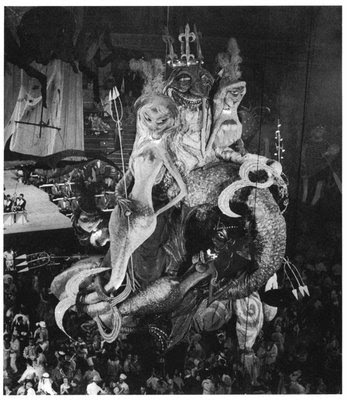 The results were spectacular. In 1934, one observer described "groups of men dressed in coloured silk blouses and tight-hipped trousers ... lips ... rouged and faces painted. By their attitude and general behaviour they were obviously male prostitutes."... 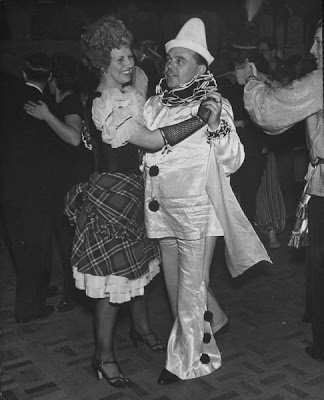 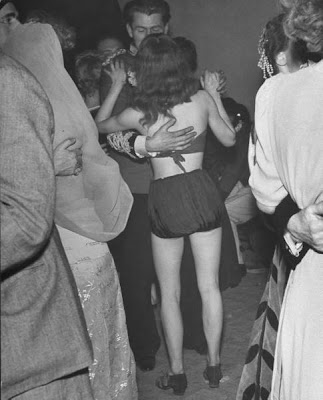 From the early 1930s the organizers of both events were increasingly exercised by these "disgraceful scenes," and a nagging sense that men's behavior was somehow out of control. In 1936, Lady Malcolm herself wrote cryptically - apparently in some desperation-to the Times: 'Each year I notice at the ball a growing number of people, who, to be frank, are not of the class for whom the ball is designed. It is what it is called- a servants' ball, and I am jealous that it shall go on deserving that name." 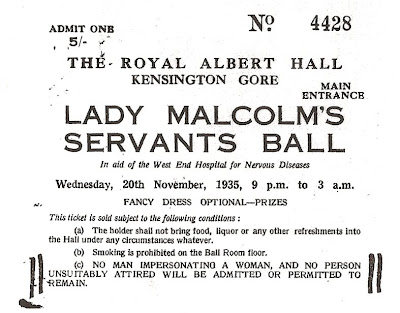 Both balls employed private stewards to maintain "order" and exclude "undesirables." From 1933, having failed to secure a police presence, Malcolm employed two ex-CID officers to remove any identifiable "sexual perverts." From 1935 tickets were sold with the proviso that "NO MAN IMPERSONATING A WOMAN AND NO PERSON UNSUITABLY ATTIRED WILL BE ADMITTED". On entry, men's costumes had to be approved by a "Board of Scrutineers." Whatever they tried, however, the organizers could neither keep the "Degenerate Boys" out nor adequately contain their visibility; indeed, they often struggled even to identify them amidst the fancy dressed crowds. In 1938, an observer thus described the "extraordinary number of undesirable men at this Ball who were unmis­takably of the Homo-Sexual and male prostitute types." Well into the 1950s, the balls remained, in Stephen's words, "a great Mecca for the gay world."

Working-class men reappropriated two high-profile public events, creat­ing a space at the center of metropolitan culture in which they could be together and socialize free of the constraints that braced everyday queer lives.' 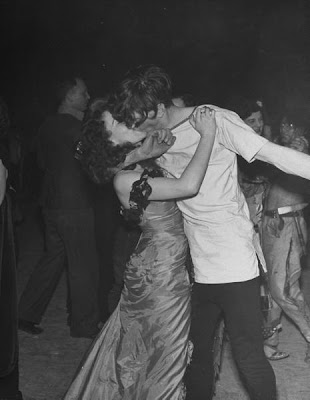 Quote: Queer London: Perils and Pleasures in the Sexual Metropolis, 1918-1957 - Matt Houlbrook (University of Chicago Press, 2005) - I couldn't find any specifically drag photos, but these images certainly show that this was some party.
Posted by Transpontine at 3:31 pm

Posts such as these make me love yr blog!

I greatly enjoyed your article on the Chelsea Arts Club Ball. I am completing my Masters at the Architectural Association and was looking for more information about the "unique legal status" of the Royal Albert hall you mention. Where can I find more information?