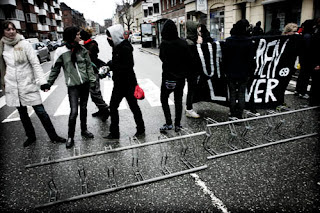 Thousands of people have taken to the streets of Copenhagen in angry protests against yesterday's police eviction of Ungdomshuset (the 'Youth House'). There has been a Reclaim the Streets party, barricades and tear gas. Solidarity actions have taken place all over Europe.

The occupied house has functioned as the major alternative social centre in the city since 1982. Its role as a free party venue has been important. A recent communique calling for more Youth Houses asserted: "We are fed up with commercial discotheques, stinking with profit greed and discrimination. We want genuineness, honesty and a life we have influence on. We are tired of social events closing when the party is at its peak, because nobody wants to work for free in a club with a boss. We decide when to close and start our parties, where they take place and what's going to happen. We don't have to consider tickets and profit, because we don't care if we make money or not. Our culture is not about money, power and control".
Posted by Transpontine at 7:55 pm