How Does it Feel to be Loved? 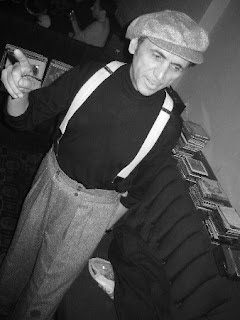 I went down to How Does it Feel to be Loved? at the Canterbury Arms in Brixton last month, which describes itself as a 'a london club night playing indie pop, northern soul, tamla motown, girl groups, and sixties heartbreak'. The guest DJ was Celtic Soul Brother No.1 and ex-Dexys Midnight Runner Kevin Rowland (pictured here on the night), and the dancefloor was suitably busy.

Rowland played a mixture of (mainly 70s) soul, r'n'b, reggae and disco classics, highlights for me including The Love I Lost, Walk Away Renee, Young Americans and Everything I Own (full set list here). I would have expected a bit more Northern Soul, but resident DJ/promoter Ian Watson did oblige with some of this mixed in with Motown and indie pop (Smiths, Camera Obscura, Belle & Sebastien etc.)

There's something quite singular about the music policy of this club, rewriting pop history around handclaps and heartbreak rather than more familiar categories like 'soul' and 'indie'. As I wrote elsewhere after an earlier visit 'a lot of indie/alternative music is based on an imagined rockist trajectory back to punk which denies soul/pop influences. For me there is a definite thread of broken hearted yearning for a better life from a female (or non-blokey male) perspective linking Diana Ross and Dusty Springfield to Morrissey and Stuart Murdoch.'

Rowland's last track was 'No Fun' by The Stooges and played in this context even this didn't sound so much like a punk precursor as a mutant take on the motown sound (they were a Detroit band after all) - just listen to those handclaps!
Posted by Transpontine at 8:07 am