I could have danced all night 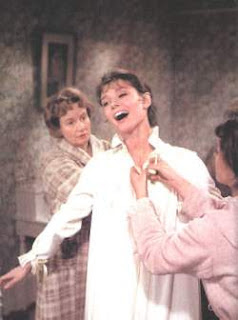 At the weekend I took part with my daughter in a South London community musical production of My Fair Lady, featuring a cast and crew of 200 people from aged 5 to 65. It put me in a mind of an article I came across recently which was originally published in Movie Magazine in 1977. 'Entertainment and Utopia' by Richard Dyer discusses musical movies. At at time when many radicals would have viewed these as simply Hollywood propaganda, and a love of them as a form of 'false consciousness', Dyer sought to identify the utopian impulses behind their popularity:

"Two of the taken-for-granted descriptions of entertainment, as 'escape' and as 'wish-fulfilment', point to its central thrust, namely, utopianism. Entertainment offers the image of 'something better' to escape into, or something we want deeply that our day-to-day lives don't provide. Alternatives, hopes, wishes - these are the stuff of Utopia, the sense that things could be better, that something other than what is can be imagined and maybe realized. Entertainment does not, however, present models of Utopian worlds, as in the classic Utopias of Sir Thomas More, William Morris, el al. Rather the utopianism is contained in the feelings it embodies. It presents, head-on as it were, what Utopia would feel like rather than how it would be organized".

'Scarcity (actual poverty in the society)' vs. 'Abundance (elimination of poverty)'

'Dreariness (monotony, predictability, instrumentality of the daily round)' vs 'Intensity (excitement, drama, affectivity of living)'

'Fragmentation (job mobility, rehousing and development, high-rise flats, legislation against collective action)' vs 'Community (all together in one place, communal interests, collective activity)'.

I'm not sure our little production quite embodied all these utopian possibilities - after all the sense of excitement and abundance in the movie versions is partly created by editing and a riot of colour and effects. But the sense of community was certainly quite tangible.
Picture: Audrey Hepburn singing 'I could have danced all night' in 1964 film version of My Fair Lady.
Posted by Transpontine at 7:26 pm