Back in the 1970s/early 80s the Throbbing Gristle/Psychic TV nexus explored the notion of sound as control, including how particular sonic frequencies might be used to trigger particular emotional and bodily states. The 1984 film Decoder (which included Genesis P. Orridge and William Burroughs in its cast) was based on the premise that muzak was being used in this way to control the population. There is certainly evidence that the military have sought to develop sonic weapons. According to an article in yesterdays' Guardian though sonic weapons are already widely deployed across Britain - against young people
' 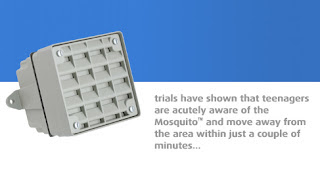 A black box emitting a high pitched pulsing sound designed to deter loitering teenagers is being used in thousands of sites around Britain just a year after its launch, prompting warnings from civil liberties campaigners that it is a "sonic weapon" that could be illegal. The Mosquito device, whose high-frequency shriek is audible only to those under around 25, has been bought by police, local councils, shops, and even private home owners, to tackle concerns over groups of young people congregating and causing disruption.
Less than 18 months after the device, produced by Merthyr Tydfil-based firm Compound Security, went into production, 3,300 have been sold - 70% of them in the UK.
So great has been demand that the company is now working on a more powerful, 50m-range model designed to be used in larger areas such as cemeteries and hazardous building sites, and is drawing up plans for a higher volume hand grenade version requested by the United States prison service to help tackle riots.
However, while some local authorities and police forces are highly enthusiastic about the Mosquito, campaigners Liberty are raising concerns about both the machine's legality and its effectiveness in addressing antisocial behaviour. A survey by the organisation has identified the device being used in every region of England except the north east, including in Merseyside, where police have mounted it on a car to drive to trouble spots. Liberty director Shami Chakrabarti said: "At worst, the Mosquito is a low-level sonic weapon; at best, a dog-whistle for kids. Either way it has no place in a civilised society that values its children and young people and seeks to imbue them with values of dignity and respect. Degrading young people instead of providing opportunities for them is a tragic option whose long-term effect is frightening to imagine."
Liberty argues that the device is inappropriate, partly because it is indiscriminate, causing discomfort to and potentially driving away all teenagers in an area rather than specifically targeting those who may be causing trouble. Alex Gask, one of the campaign group's lawyers, said: "Our objection is that this device is clearly designed as a way of getting rid of young people as a problem and about seeing them as a problem rather than identifying specific behaviour they are engaged in and getting rid of that."
The Mosquito worked.... as an irritant, whose four-times-a-second high-pitched sounds began to affect young people only after 10 to 15 minutes'.
Source: Guardian, 17 March 2007.
Posted by Transpontine at 10:27 am

I'm always amazed how afraid the UK is of its youth and the lengths it will go to keep them from disrupting their peace and quiet. Of course youth aren't completely inculpable, but they're all treated as goons and sociopaths.