Once Upon a Time in New York

Excellent BBC4 documentary this week. Once Upon a Time in New York: The Birth of Hip Hop, Disco and Funk was only an hour long when any of the subjects are worthy of a series, or even a channel of their own, but it did convey a sense of the excitement of a very fertile time. It is arguable whether New York was singly the birth place of these genres, but it is undoubtedly true that in a 6 or 7 year period (approx. 1975-1982) the city was a so 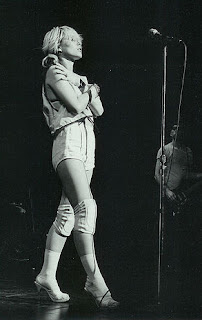 nic laboratory producing mutant musical strains that shaped the next thirty years of popular culture (so far). Not to say that New York wasn't important before or since - the film covered some of the pre-history with the Velvet Underground and the Stonewall riots (showing a contemporary newspaper report with the headline 'Homo Nest Raided. Queen Bees are Stinging Mad').

I liked the footage of the club scenes - Edie Sedgwick dancing at Andy Warhol's Factory, a packed David Mancuso's Loft, punters at CBGBs with John Cale, Debbie Harry (right) and Talking Heads in the crowd. Footage of DJ Kool Herc driving around with massive speakers in his car and block parties, an early Blondie performance at CBGBs doing a cover version of Martha & The Vandellas 'Heatwave'. Most hilarious was a TV report from the British 'News at Ten' direct from the dancefloor at Studio 54 with the hapless reporter saying that it was 'difficult to know exactly what it is that attracts people here'. Perhaps he should have asked Wayne County, Nile Rodgers or Nelson George who int he programme recalled sex and drugs on the club's balcony.
If you are in the UK and have freeview or cable, I think you can catch this programme repeated tomorrow (Friday) at 10 pm
Posted by Transpontine at 9:56 pm