Bronx-based radical Commie Curmudgeon has completed our Dancing Questionnaire (also posted on his site), and very interesting it is too. Some threads and themes already emerging from these questionnaires, as well as documenting moments and places that don't deserve to be forgotten.

Spinning around on the hallway floor to Meet the Beatles when I was about four or five years old.

Stopping traffic in the streets of Manhattan as part of a group that advocated for revolution (even if most of the gawking onlookers didn’t quite get it). All the while dancing. I did that a few times with the New York City branch of the global anti-capitalist-festival group known as Reclaim the Streets [RTS New York traffic sign pictured]. The best event was actually for a relatively sma

ll cause, to defend the community gardens, in the spring of 1999. We took over a street in the East Village for a while with little interference for a period that felt like hours. (Probably not as long – I forget how long it was.)

Whats the best place you’ve ever danced in?

Again, with RTS, in the middle of 43rd Street near Broadway, on November 26, 1999. (This was for 'Buy Nothing Day', but also as a prelude to the protests in Seattle that were scheduled for November 30. Somebody asked me if I wanted to join a bus out to Seattle, and I declined, because I didn’t think I should take off from work. Hmm, how many times did I kick myself for that decision later on?) Anyway, it was pretty impressive that we stopped traffic right near Times Square. Though it didn’t last very long – 15 minutes? And many of the people got arrested. I didn’t get arrested – I had a knack for being invisible to the police back then. (It might have helped that I was slightly older than the others and wore slightly less conspicuous clothes. But I happened upon a video later and, as several other people commented, I actually was the wildest in terms of dancing. Not meaning to boast or anything…) 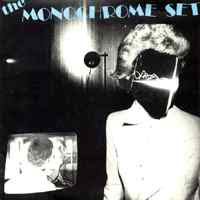 RTS was good, but golden moments of post-punk youth were better. So… Dancing to a live show by The Monochrome Set in the early ‘80s in a club called the Starlight Ballroom, which was a big, no-frills place in a rundown section of Philly (I think it was Kensington), with about 50 people in the crowd. It was my 18th or 19th birthday, I was blasted in a nice way, and I loved to dance to The Monochrome Set, even though they weren’t known exactly as a dance band [sleeve of 'Alphaville' single, right]. I had good friends there to dance with too. I think that was when I was dancing with all the members of an all-girl art school, toy-instrument kind of noise band called Head Cheese. I went dancing a lot with Head Cheese, and that was fun, if a bit weird. (By the way, brush with fame(?)… The singer of that band, with whom I was fairly good friends for a while (by which I mean just friends, though I wasn’t lacking in other ideas now and then)…went on to form a New York City synth-pop band that had a Top 40 hit in the ’80s. The band was Book of Love, the song was “Boy” (popular especially with the gay set). But I was no longer friends with Susan. We’d had some kind of falling out over…what?…I don’t know…looking back on it, seems like nothing, from what I can tell…) .

Some benefit for the Direct Action Network Labor Solidarity Group, in 2001. The benefit was a flop, and I was going through not-so-good times with different members of the group, for different reasons (no, not going to go into it here). The band was some Irish band; I forget who, but they weren’t bad. I sort of danced alongside a few people, activists, who were the only other people on the dance floor. I got drunk, but not for good reasons. Everybody was drunk, but it was a crappy time.

Hot Club, Philadelphia, late ‘70s – a seedy little place, very punk, very intimate, and wild. That was great… Emerald City, Cherry Hill, New Jersey, late 1970s. Big, garish new wave club, very tacky, but with some incredible lineups and very underpopulated. Saw a double bill there of The Buzzcocks and The Fall in about 1979… Summer porch party in a five-person communal house in West Philly, 1981. One member of the house was in a band called the The Stick Men, who were like a rap-influenced version of the no-wave-funk band The Contortions. We were dancing to her record of The Sugar Hill Gang… Hurrahs, NYC, early ‘80s. Most outstanding experience was a Bauhaus show… Tier 3 and Mudd Club, NYC, early ‘80s. Both were clubs around Soho (if I’m remembering right). Tier 3 was much better, I thought, because it was more intimate and less trendy…. Little club in Tribeca (I forget the name), mid-late ‘80s; they were playing this stuff called “acid house” (loved it)… Limelight, a converted church in NYC, in the mid ‘90s. Not so great, and too trendy. Went to an Orbital show there, and did not have a good time – Orbital was OK, place was far too crowded, just not into pressing bodies with strangers (I can do that on the subway during rush hour)… Irving Plaza, NYC all the way from the mid ‘80s into the late ‘90s. Not a bad place. Had a lot of fun at a Chumbawamba show in about 1998(?) (though I’ve since then gott 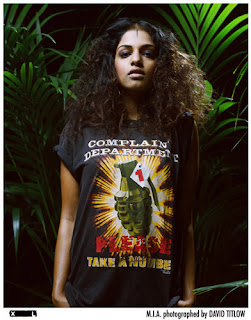 en very, very tired of Chumbawamba)… And, of course, dancing in the streets, and going to some small warehouse-type raves, with Reclaim the Streets…

The other night in my bedroom, with a wonderful long-haired cat (by which I mean, really, a cat – I’m not using slang). He clung to my shoulders while I danced around the room to “Sunshowers” by M.I.A [pictured left].

You’re on your death bed. What piece of music would make you leap up for one final dance?

Right now… Probably the song that I just mentioned.
If you want to complete the questionnaire please do, either post it on your own blog or send to transpontine@btinternet.com
Posted by Transpontine at 7:33 pm