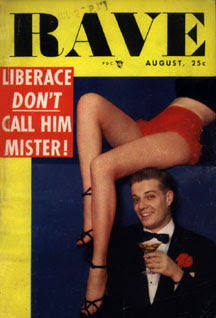 This US magazine cover is from 1954. By this point the word 'rave' was already being used in London to describe all night parties in the jazz scene.

Was it being similarly used in the US? I suspect that this magazine was using 'rave' in the earlier sense as in 'rave reviews' or even 'raving mad'. Buddy Holly seems to have this sense of raving - rather than dancing -in his 1958 hit 'Rave On':

"Rave on, rave on and tell me, Tell me not to be lonely, Tell me you love me only, rave on to me".

If anyone can find evidence of 'rave' being used as a noun to describe a party in the USA in this period, or even earlier, I would be interested to hear about it.
Posted by Transpontine at 8:58 pm