In previous posts we have looked at the revivalist jazz raves organised by Mick Mulligan and Cy Laurie in 1950s Soho. From the mid-1950s a new scene was developing, based around 'traditional jazz'. The musical distinction was that while the former favoured the 1920s jazz band sound found on Chicago recordings by Louis Armstrong and others, advocates of the latter claimed that the real New Orleans sound was to be found in the music of players who had never left the city to head North, unlike Armstrong and Jelly Roll Morton. This search for the ever-receding holy grail of authenticity was mocked by some at the time. Jeff Nuttall recalls that "Uncle John Renshaw, a band­leader of the time, used to say with some irony 'I'm in the sincerity racket, meself.'"

Despite its antiquarian musical roots, the trad jazz scene (and the related skiffle scene) was very much a youth sub culture of 'ravers'. Nuttall recalls that in the mid-1950s: 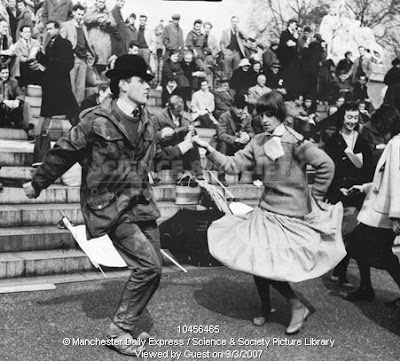 "Soho was alive with cellar coffee-bars, where skiffle and jazz could be played and heard informally and where the rich odour of marihuana became, for the first time, a familiar part of the London atmosphere. Sam Widges was the most popular. Also there was the Nucleus, the Gyre and Gimble, the Farm. They were open most of the night and often the management would leave you to sleep where you sat. It was a place to stay in the dry if you didn't want to go home. It became obvious that parental control was going to stop at about the age of fifteen for a large number of young people. Teenage wages were going up and so were student grants. It was becoming possible to push the leaky boat of adult delusions a little further away. The Soho Fair, which ran annually for three years [1955-7], was a festival of the ravers. Bands and guitars and cossack hats and sheepskin waistcoats flooded out of the cellars and into the streets. It was so good that it had to be stopped, so good that it was in the first Soho Fair that the real spirit of Aldermaston was born'. Trad jazz bands provided the soundtrack on the Campaign for Nuclear Disarmament marches to or from Aldermaston nuclear weapons base from 1958 (picture of dancers is from 1958 march).

In a 1962 New Statesman article, George Melly described 'An All-Night Rave at the Alexandra Palace', a "'trad' ball" where "Band followed band from 9.30 P.M. until 7.30 A.M. the next morning. The audience were dressed almost without exception in 'rave gear'... the essence of 'rave gear' is a stylized shabbiness. To describe an individual couple, the boy was wearing a top hat with 'Acker' painted on it, a shift made out of a sugar sack with a C.N.D. symbol painted on the back, jeans, and no shoes. The girl, a bowler hat with a C.N.D. symbol on it, a man's shirt worn outside her black woollen tights. Trad' dancing in the con­temporary sense is deliberately anti-dancing. When I first went to jazz clubs, there were usually one or two very graceful and clever couples. But today the ac­cepted method of dancing to trad music is to jump heavily from foot to foot like a performing bear, pref­erably out of time to the beat... Trad musicians have chris­tened these self-made elephants 'Leapniks'." The Acker referred to here was Acker Bilk, the jazz clarinettist and unlikely musical figurehead for late 1950s/early 1960s ravers.

The trad jazz scene as a youth movement was soon to be overwhelmed by The Beatles and everything that followed. In the semi-situationist journal Heatwave (1966), Charles Radcliffe included the ravers in The Seeds of Destruction, a ground-breaking survey of 'youth revolt':

"The Ravers... had some Beat characteristics and rather tenuous connections with the anti-bomb movement but their main preoccupations were Jazz clubs and Jazz festivals; this was the period when ersatz traditional (Trad) Jazz, as purveyed by Acker Bilk, Kenny Ball and others was inordinately popular. Partly Trad's popularity arose in reaction to the decline of the small fifties Beat scene; it was easy to dance to and Jazz clubs were among the few places where teenagers could do more or less as they wished without adult interference. Partly it arose because the musicians did not take themselves too seriously and were often simply good-time Ravers".

Ravers' dress was a kind of "'music-hall-cum-riverboat-cum-contemporary-folk-art' with Campaign for Nuclear Disarmament symbol decorated bowlers, umbrellas, striped trousers, elegant jackets. The chicks had long hair, wore ban-the-bomb type uniforms (duffle coats, polo-neck jerseys, very loose around the hips, and jeans). The Ravers were, on the whole, distrusted by other groups with whom they came into contact; the Beats used the term 'Raver' derogatorily and the nuclear disarmers treated Ravers' 'superficiality' with superior amusement and occasional annoyance... The Ravers, as such, died with the 'traditional' Jazz boom but the 'Raver philosophy' continues and there are once again groups calling themselves Ravers. The term has likewise regained its approbatory meaning after the frequent critical use by the CND generation".

Here we have a phenomenon that was to re-emerge with 'ravers' from the 1980s onwards - the use of the term as a put down by the would-be serious minded.

The George Melly quote is reproduced from 'Revolt into Style: the pop arts' (1970); Jeff Nuttall from 'Bomb Culture' (1969). Image source: Science and Society Picture Library. For more on Heatwave, see the excellent Dancin' in the streets! Anarchists, IWWs, Surrealists, Situationists & Provos in the 1960s as recorded in the pages of The Rebel Worker & Heatwave, edited by Franklin Rosemont and Charles Radcliffe, Charles H. Kerr Publishing Company, Chicago. 2005

We would love to hear some first hand accounts of 1950s/60s raves - photos too would be great. If you were there why not leave a comment, or email transpontine@btinternet.com
Posted by Transpontine at 12:02 pm

Absolutely incredible. I had no idea about this whatsoever. Absolutely fascinating. I only found your blog today, I think via Chris Dillow, and am so pleased. Thank you.

Thanks James, the 50s jazz raver phenomenon was all new to me when I started researching this, the lesson I take from it is that every generation likes to believe that they were the first to invent staying up dancing in disreputable dives, but there's not much that (some of) our grandparents haven't done before us.

@ transpontine
that was very true.. and what i believe is, one more thing that made the dance really incredible was their rave gears..
and, for a full set of rave gears,
do check out www.ravehaven.com

Its funny to see how far the word "rave" has come.

The clothes were definitely different for the times, like they are now though.

I was there in the 50s, 1955, I reckon! I met Melly,Acker, Ken Colyer and became friends with them and many others, sometimes singing with the bands at odd clubs here and there! Glad you mention the Farm, I'd forgotten it ,but not the others like "The Nucleus,The Two I's, Heaven and Hell,Sam Widges,Frenchies Pub, with Sean Daly and Brendan Behan, holding forth,or Francis Bacon, flouncing in sometimes,(dear old Gaston's gawn, an all)Then there was "Muriels" the Colony Rooms with a black limping pianist( forget his name, anyone?), and where you could hear Dudley Moore some nights,Another gaff downstairs , drinking club,she, the owner, had a dog called Spliff, where Dubliners amongst others would get rat arsed, and cause a ruck or two (so did I, of course, get rat arsed ,I mean).The Ace Caff on the Nth Circular, where I lived in a burnt out Austin Sheerline in the car park,and you could meet Four Square George, Noddy , Dan Dan the Smash and Grab Man, and Len behind the jump before The Reverent watisname and his 59 Club!:Eelpie Island, when you took the ferry or swam over, and they had gas lights!Aldermaston and the fairground next doop where I worked for a while, (what was the name of the pub "The Heron'' or something, memory fades! The all night raves and the Brighton Milk Train from London, "Fred" the anarchist symbol, (WHO remembers THAT)Hampstead, and all the poncey parties,( good for us tho)What fond ,sweet memories, AND IT AIN'T FINISHED YET I'm still singing , ravin' it up ,here in the South o' France, but got me own band now!

Yes, I remember those days. We used to go down to Brighton on the newpaper train from London Bridge and drink cider at Applejohns cider bar - then sleep it off on the beach. I wore and old duffle coat and a beaten up old trilby. Remember Ken Collyers jazz club in Gt Newport St and all night jazz concerts at the Albert Hall - those were the days!!! My friends went on the Aldermaston march - don't quite know how I missed it there were some good photos - don't have them now.

The Nucleus and Sam Widges! First time I've seen anyone mention those places. Me and my buddy Richard Baker used to go there. We were only 13 or 14 at the time but we had an older mate Grahame "Pansy" Potter who had started working at an ad agency in the West End and we used to get in somehow. The owner of the Nucleus was Big Dave and he had that large german shepherd dog. He chucked us out on one or two occasions for being under age! Sam Widges, Ken Colyers (great for sussing out the older crumpet!) Eel Pie Island and Aldermaston marches all figured in our daring underage activities. Great days! Also Brubeck and Blakey at the RFH. A fewe years on and we were regulars at the Marquee etc -- Tubby Hayes, Tony Kinsey etc.

Must know you, did all the things ,(more or less)you did ,same places, same people! Colye rat the 51, Tubby hayes at The Hopine,Wembley, George Melly , all over the place , tho not a special favourite,Alex Welsh at The Fishmongers Arms Wood Green Aldermaston What was the name of the pub" the Parrot" or Falcon or something at Tadley! The late night milk train to Brighton,Ravers and beatniks(I was a Boey ie Bohemian )

Was at the all nighter a couple of times. Mellie and Disley introduced the bands, first year bar shut at midnight, A pint glass was was overhead full to the brim with whisky, weren't allowed to buy a bottle. Following morning queued for buses to local tube, with George Mellie!