Naturally the hype about Nu Rave is bound to give us older ravers cause for wonder. Simon Reynolds, reflecting on The Klaxons, notes the abscence of any real sonic reference points to rave music - they are basically a guitar driven band after all. Nevertheless he still suggests that the 'fact that the Ghost of Rave, in however mis-shapen a state, stalks the culture again signifies something, surely. It announces a lack, speaks of a yearning'.

To a certain extent, 'rave' is just one more seam in the gold mine of past counter/sub cultures, a mine well explored by The Klaxons with their arch references to Burroughs ('Atlantis to Interzone' ), Crowley ('Magick') and Pynchon ('Gravity's Rainbow'). The term Nu Rave seems to have started as a joke, or perhaps more accurately a tongue in cheek hook for the music media coined by the KLF-literate Joe Daniel of Angular records, who released The Klaxons' first single. Nevertheless there is a tangible phenomenon with The Klaxons and a number of other bands standing aside from from the worst boring blokes with guitars indie-rockist counter-revolution.

The commonality between some of the more interesting newish bands is not really an imagined link to 'Rave' but an intelligent, anti-cool, playfulness, with a desire to create interesting situations rather than just fulfill a Brits school business plan. It is noteable that as well as The Klaxons, Art Brut, The Long Blondes, The Violets and Bloc Party all first released stuff through Angular, a small indie label whose 2003 New Cross compilation created an explosion of interest in the corner of South East London where I live. Actually most of the 'New Cross Scene' bands weren't from the area (The Klaxons and Violets were), but playing in local venues like the (sadly gone) Paradise Bar gave them a crowd and a leg up. Angular has functioned like some earlier classic indie labels such as Postcard or even Crass's label, content to put out one or two tracks by bands they like to introduce them to the world and then leaving them to make their own way. Angular reference points include riot grrrl and indie pop rather than the tedious 60s/70s bloke rock canon. As well as launching (or maybe fabricating) 'Nu Rave', Angular have also been credited by the NME with inventing 'art punk'.

Musically, all of this is quite diverse, but what has been exciting - and perhaps following in some kind of rave trajectory - has been a sense of adventure, of stepping outside the normal confines of predictable outfits and gigs, a sense of the crowd and not just the band. An excitable New York Times journalist may not have been entirely geographically or otherwise accurate in the following description: "The new rave scene is a small, tightly connected movement of artists, D.J.’s, bands and partygoers forged in a series of warehouse parties that, beginning in 2003, were organized by a gang of artists called the Wowow Boys, in New Cross, a ragtag neighborhood of students and boarded-up buildings southeast of London Bridge. As in the 1990s, the gatherings attracted newly formed bands that were eager to create an environment "where the specific aim was to party", said Jamie Reynolds, the bass player of the Klaxons'. 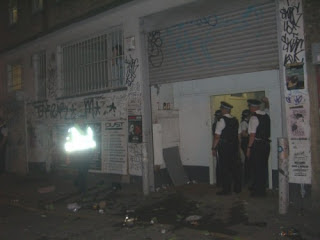 But there have been real warehouse parties -we went to one at The Old Seagar Distillery in Deptford last year (where The Klaxons played), there have been parties in Peckham, and yes there's even been the obligatory police presence without which no self-respecting youth scene is complete (see this report of a squat party in Shoreditch last July, pictured). The Klaxons, with their ear for melody, may be heading for bigger things, but less radio friendly outfits like Lost Penguin will no doubt be blasting party goers for a while longer. All we need now is a moral panic to really kick things off, but with so many first time ravers now writing for the British press, this looks unlikely.

(photo sourced from PopScene).
Posted by Transpontine at 10:09 pm

Can't wait to hear more from your blog. tV