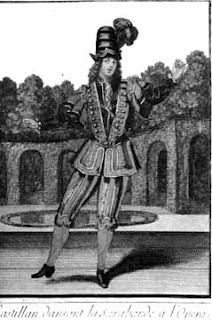 ‘Some claim this dance received its name from a devil in woman's shape who appeared in Seville in the twelfth century, and who labeled it the zarabanda. In the sixteenth century, certainly, the dance and the song that accompanied it were considered by a Jesuit historian to be indecent in its words and disgusting in its movements. Even Cervantes described it as having "a diabolical sound." So seriously did the Spanish authorities take the threat of the zarabanda (which the rest of Europe, less concerned by its devilish origins, altered to saraband) that in 1583 anyone caught singing or reciting its words was to be punished with two hundred lashes, in addition to being exiled (if female) or sentenced to six years in the galleys.

For better or worse we know almost nothing of the actual dance in its original form. Apparently it was once a sexual pantomime, for in Barcelona couples twisted their bodies to the rhythm of castanets, and by the time it came to Italy the breasts of the dancers were allowed to collide and the lips to kiss. But from being erotic it became a gliding, processional dance, and it ended up as part of an instrumental suite. It was introduced to the French court around 1588, and was a favorite of Louis XIII, not to mention his minister Cardinal Richelieu. It remained popular well into the seventeenth century, since Charles II of England often called for it to be played. Perhaps it is an example of what happened to the dances of the people once they got to the court: their rude energy was canalized into something fit for the most delicate disposition—even if they became somewhat anemic on the way’.

Source; Peter Buckman, Let’s Dance: Social, Ballroon and Folk Dancing, p.88 (Paddington Press, London, 1978). The picture is of a Spanish actor dancing the zarabanda at the Paris Opera, published in 1636.
Posted by Transpontine at 10:38 pm