Nostell Priory Music Festival was held near Wakefield in West Yorkshire in 1984, a commercial festival with performances from Van Morrison, The Band, The Danmed and many others. It was also the scene of a violent police operation against the Convoy of festival travellers that prefigured the notorious Battle of the Beanfield in the following year.

The Convoy had emerged from the UK free festival scene in the late 1970s, as a nomadic community moving between festivals in trucks, vans and converted buses. For many travelling became a way of life all year round, not just in the summer festival season with the term New Age Travellers being invented to describe them. The name 'Peace Convoy' became attached to the Convoy as the peace camps at Greenham Common and Molesworth cruise missile bases became added to the itinerary. For instance in 1982, the Convoy arrived at Greenham and occupied land for a 'Cosmic Counter-Cruise Carnival'.

Thus the Convoy was lined up in the Thatcher Government's sights as part of The Enemy Within, along with striking miners, peace campaigners, Irish republicans and other dissidents.

At Nostell Priory, as at many other festivals including Glastonbury in that period, the Convoy has established its own more anarchic area on the edge of the commercial festival. As the festival came to an end, riot police raided the site, arrested 360 travellers (almost all present) and trashed their tents, benders and vehicles. Many of them were remanded in custody for up to two weeks - including in an army prison - before being convicted by magistrates on various trumped up charges.


There's a good interview with the late Phil Shakesby by Andy Worthington which describes what happened. Here's an extract:


'It was the time of the miners’ strike, and the police had been herding them off into a field and battling it out with them. When the police steamed into Nostell Priory, they were fresh from beating up this bloody mega-wodge of miners. The first we knew of it was about half past eleven, when Alex came steaming past my gaff shouting, ‘The Old Bill’s coming up!’ As I leapt outside and looked up this huge field, there was these great big blocks of bobbies, just like the Roman epics, at least four or five hundred of them. And they came charging across the field towards us, with these batons banging on their riot shields, shouting a war cry. Oh, my goodness!

They surrounded us just right of the marquee. At that point we were well and truly sorted. As I say, they had these mega bloody riot sticks, and wagons chasing through the site running into benders. Now they didn’t know whether there was anybody in these benders, and they’d run into them at high speed, just loving the way that they exploded. The tarp and all the poles would blow out, scattering the contents all over the place'.

Interestingly in terms of what we are beginning to find out about police infiltration of movements in this period, Phil recalls that undercover police were also active in The Convoy:  'The other thing that went down: these guys that looked just like us — there was about seven of them. They’d infiltrated us that summer and done a bloody good job. They’d been wheeling and dealing along with some of the other lads that did that kind of thing. As we’re surrounded, people are getting these lumps out of their back pockets and shoving them to one side. They were arresting us — arm up the back — and filing us out through the crowd and pushing us into the main bulk of the bobbies with the tackle'.
The following contemporary account comes from Green Anarchist magazine (Nov/Dec 1984) at the time:

'Previously the Convoy had been told by the police that there would be no trouble, as long as they moved on peacefully and got out of Yorkshire. It then seems likely, after a report that the Yorkshire police chief said that "they were powerless to act against the Convoy" that Thatcher hit the ceiling, and demanded action. Next morning at 5 am, 3 coaches and 10 van loads of riot police surrounded the camp. As the Convoy retreated to the Marquee the police trashed their vehicles, smashed windows, tearing out wiring with the excuse of looking for guns. There were no guns.

They then demanded to talk to the Convoy's leader 'Boris'. They had got that wrong too. Boris is the goose. The Convoy started quacking. But they were surrounded... [later] Back at the site, a scene of wreckage, the Convoy who had just donated to the miners, were helped by them with food and tools to mend the vans and 45 gallons of diesel, and gave their addresses for bail' (Convoy Arrested, Green Anarchist, Nov/Dec.84). 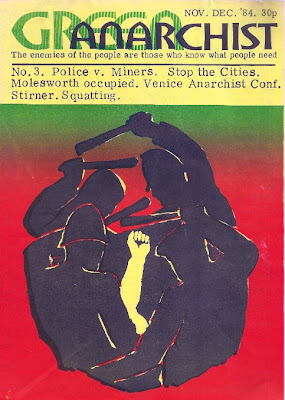 Posted by Transpontine at 11:21 am

When speaking to a few people who were active around The North during the Miner's Strike, they fleetingly mentioned that after the trashing of The Convoy at Nostell Priory, some striking miners came by the site to offer help and support. I never read about this anywhere but as I say a couple of people who I passed a few conversations with once said this. Would be great to find out that this was indeed what happened. Anybody know?

Oh I should read these things properly. The Green Anarchist quote says it was true! A significant moment in 1980's political terrain methinks!!

I was at molesworth at the time , but I also heard that the miners came and gave support , we sent a couple of relief buses up from molesworth too

be interesting if 'Pride' movie instead looked at how convoy did their bit for the miners,

Please get in touch if you kniw anyone from the convoy called Terry who lived in a coach with
Florence my email is conniecalmconnolly@gmail.com many thanks in advance

I lived on doorstep and was there,The police and army came of the picket line that day.The miners gave them clothes whilst our drugs were half price.they worked hand in hand😉ie CHUMBAWAMBA song.....FITZWILLIAM
says a lot about my village😉✌✌

I was one of the miners who went to help the following day,I had warned some of the travellers the previous day of the intended attack on them, when I arrived the following morning most of the men had been arrested leaving only women and kids behind, we helped those remaining the best we could.

I was one of the kids that witnessed that horrendous messmy dad and i supported the miners by busking. My dad was arrested at nostal got 5 years. Thank you for your comment and support

I'd hitched up to the festival from West Wales. Just before Fitzwilliam I met up with an ex squaddie who was going to the festival too.
We walked into the village and decided to have a pint.
We ended up at a working men's club.
On entering in classic Western style all activity stopped and everyone stared at us.
I ordered two pints.
The barman said, "You Welsh?"
I said "Yes, from the Rhondda originally, but now in West Wales"
"So you know Maerdy then?"
"Course I do, I lived in Tylorstown."
I apparently passed some kind of test and got served.
The ex squaddie got questioned too. Turns out he'd been a miner before joining the army.
After a few rounds we met a team of miners with loads of maps trying to find ways of getting out of Yorkshire to picket without using main roads as they had been banned from leaving the county.
They said they'd be at the festival but wouldn't be paying as they knew the grounds well, having been poaching deer to put food on the table.
One of the miners we spoke too became a barrister and defended some of miners arrested after the police raided Fitzwilliam just before the festival.
I recall seeing signs in potato fields warning the crops had been deliberately poisoned by farmers to stop the miners scavengimg them.
The feudal attitudes of the landowners was disgusting