'Dancing is not a crime!' - New York City 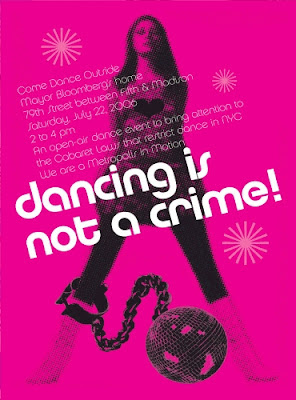 Metropolis in Motion is fighting to legalize dancing in New York City by repealing its arcane cabaret laws. They say: 'Ever since NYC Mayor Rudolph Giuliani created the Nightclub Enforcement Task Force in 1997 to enact his "Quality of Life" campaign, the city has been waging a war against nightlife culture and industry. The most lethal weapon in the city's arsenal aimed against nightlife are Prohibition-era laws known as the "Cabaret Laws". As clubs, bars and lounges are fined, padlocked and shut down, citizens lose places that foster social interaction and artists have fewer places to express themselves'
In July 2006, Metropolis in Motion held an open-air dance outside of Mayor Bloomberg's mansion to bring attention to NYC's cabaret laws. Several hundred people danced and chanted 'dancing is not a crime'.
'The NYC cabaret law was created in 1926 in an effort to curtail wild behavior in nightclubs, particularly the interracial mixing that was happening in jazz clubs. The law initially limited licenses to establishments serving food or drink featuring three or more musicians or three or more people “moving in synchronized fashion.” It also stipulated that only musicians “of good character” could be licensed to play. In 1961 the law was amended to restrict cabarets to manufacturing and commercial zones, and in 1967 the “good character” musician requirement was nixed. In the late ’80s, the courts declared the three-musician rule unconstitutional. Although musicians have won the battle, dancers are still fighting to repeal the law. Today, only 244 licensed cabarets exist.' (New York Press)
Posted by Transpontine at 7:56 pm